Is There Hope For Michael Carter-Williams' Jump Shot?

We take a look at the Michael Carter-Williams' jump shot and try to determine how easy it will be for it to become a reliable weapon for him in the future.

Share All sharing options for: Is There Hope For Michael Carter-Williams' Jump Shot?

The idea of trading Michael Carter-Williams is one that has resurfaced again in recent days.  It has been met with a mostly negative reaction from fans, which isn't all that surprising.  For a fan base that has seen its best player traded two years in a row, and two years in a row has had major injuries to prized big men, MCW drastically overplaying his draft slot and winning Rookie of the Year was one of the few nice things.

Some view the trading of Jrue Holiday and Sam Hinkie's past association with the asset-flipping Houston Rockets as an indication to expect the unexpected.  Or, last year could have been the perfect storm for a shakeup: a new GM inheriting a roster that wasn't his, led by a point guard who didn't play the style of offense he wanted, and a team devoid of assets finding a trading partner willing to overvalue him.

Sixers at 10? Pimp Somebody?

Regardless of which is true, and I tend to think that nobody is truly safe until Hinkie gets the foundational pieces that he wants, the moves of last year's draft have everybody on edge.  Regardless of if we like Michael Carter-Williams, we have to be ready for the possibility that Sam Hinkie could move him.

Even if Michael Carter-Williams improves on some of his deficiencies -- say he cuts down on his turnovers and bad shots -- if he doesn't improve as much as many projected, his value could drop as his weaknesses begin to appear to be more long term holes than areas in need of improvement.  Value is frequently a pendulum based on perception and expectations, with players swinging back and forth as situations and expectations change.  The players themselves don't change all that much, yet their perceived value does.

One of the areas where you have to try to project improvement in MCW's game is with his jump shot. The fact that he struggled is not news: he shot 26.4% from 3 point range,  32.7% on jumpers overall, and only 28% on catch and shoots.  But he's a rookie, and many believe he can improve his jump shot over time.  Right now he's a 22 year old rookie who put up incredible counting stats and won ROY, with time to improve upon his jump shot.  If he's still struggling with his jump shot at 25 and about ready to come off his rookie contract?  The opinion about his ability to improve would be less.  All it takes is two people to have different views on whether his form is correctable for them to project him differently long-term.

Before looking at Michael Carter-Williams' form, it's good to take a look at somebody who has exceptional form: Stephen Curry.  Curry is one of the best shooters off the dribble in the NBA, and the consistency in his form is one of the major reasons why. 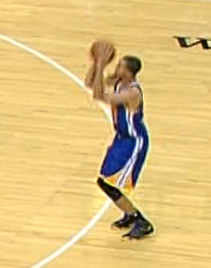 The image above is Steph pulling up off the dribble, as he had actually just pump faked his man from ~25 feet, who is now out of the picture after closing out too aggressively.  That in itself is amazing, but you have to respect Curry, even from that far out.

The basis of a jump shot is the lower body.  It's relatively easy to get the upper body motion down, but where form breaks down most frequently is in the lower body and balance.  A few key points here when I'm looking at a jump shot: 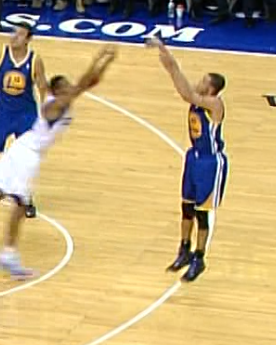 Moving on to the completion of his shot, with his elevation and the extension of his arms, you can see the perfect balance that is the result of all of the above.  A few more key points.

There are, of course, more guidelines, but these are the ones I try to keep in my head while I'm watching a guy take jumpers.

Most of the problems I've noticed with MCW are in the lower half of his body: his balance and footwork.  He'll occasionally not get full extension on his shot, and sometimes his elbow->forearm angle will be greater than 90 degrees (we'll frequently simplify this and call it "extra motion" in a scouting report), which impacts repeatability, but those problems are relatively few and something that I am relatively confident can be corrected with repetition.  It's the lower body that concerns me.

Here are some examples from jumpers that MCW took towards the end of the Sixers season. 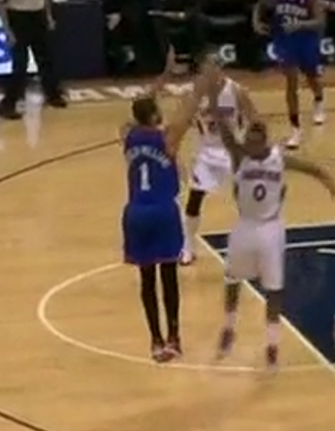 The issue with this one is his body angle.  His hip and shoulders are angled towards the bench, with his arms coming across his body towards the basket.  As I mentioned above, players can sometimes prefer to have their feet angled, rather than pointing directly at the basket, but this is excessive.  It's also not something that Michael Carter-Williams consistently does, as you'll see below.  This was the result of improper pre-shot footwork, which he tried to make up for in the air. 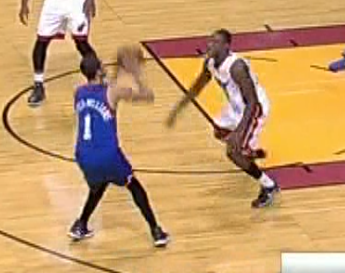 There are a number of problems on this example.  His base is too wide, well beyond shoulder-width.  If you extend lines out from his toes, they would cross.  And for where he is in terms of upper body movement he should be on the toes of his feet and rising up.  Instead, he's still relatively flat-footed, and his weight is on the inside of his heel.  His overall form and timing are off in this one. 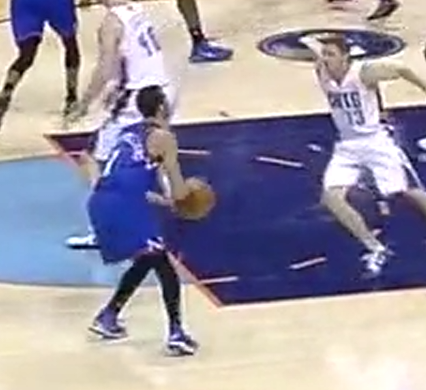 Once again, his footwork is is a mess in this one.  In this instance, his left foot is actually further ahead then his right foot, as he did not properly step into his shot.  This ultimately impacts how the rest of his upper body is lined up. 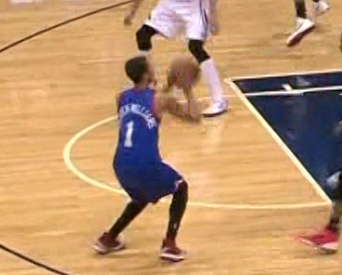 In this one, he's off balance, and rather than being on his toes, he's on the side of his foot and still trying to gain his balance, despite the fact that he's progressing forward through his shooting motion in his upper body. 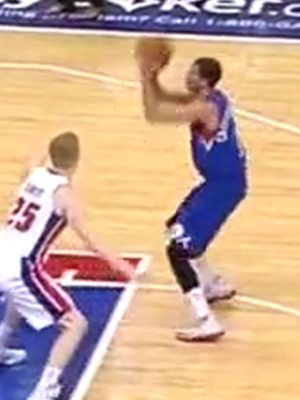 Footwork, again.  His left foot is too far forward, and you can tell by the way his knees are bent that his base is too wide, and again he's on the inside of his foot rather than properly balanced on his toes.  He also doesn't have perfect 90 degree form, but it's close enough that this would be nitpicking. 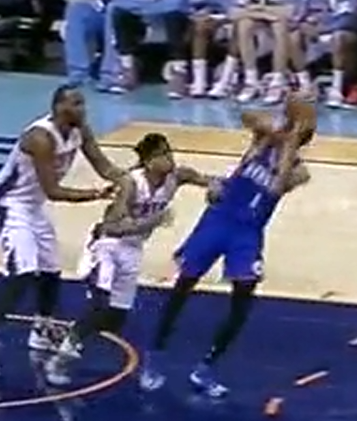 Clearly, the footwork here is, um, bad, with his foot pointing closer to his own basket than the one he's trying to score on, and his hips, shoulders, and elbow pointed in all the wrong directions.  In this instance, he was expecting to get all the way to the basket, but when help defense came, he adjusted and tried to shoot after a jump-stop.  The best of the best correct their form as much as possible, but in this instance, the best option was probably not to attempt the shot.  He airballed this one, not surprisingly. 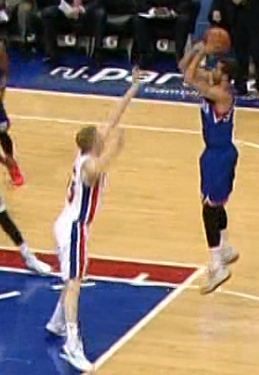 I put this one in there as an example of when things go right.  This jump shot was fundamentally sound, with his feet the proper width apart, shoulder, hips, and elbow lined up, perfect 90 degree form, good hand placement, and great elevation.

Shooting is a function of muscle memory.  It's why the saying goes that great shooters are not born, but made.  Obviously, MCW should not be thinking about his form while pulling up for a jump shot.  If he does, he's already missed the shot.  He needs to have practiced the shot, the right way, and in enough different situations, that having his footwork and balance is something that just comes naturally to him.  From what I've seen, he is not at that stage.

He's a rookie, but he's a 22 year old rookie who will be 23 by the time next season starts, a season where he won't have had the opportunity to get all that many shots up during the offseason because of his injury.  And it's going to be hard to get significant work fixing a jump shot during a season, unless you have a redshirt situation like the one Nerlens Noel just went through. The good news is that I think his upper body form isn't all that broken.  The bad news is that I think it's harder to fix lower body form and balance this far into a career.

When fixing a jump shot, it's not so much about age as it is about habits.  But It's easier to get a 17 year old out of bad habits because he's had less time forming those bad habits, his muscle memory is not as developed and it takes less correct repetition to fix the wrong memory.  MCW will have an additional 6 years of bad habits to break away from.  That's why I'm more concerned with his age than how many years he's been in the NBA.  Regardless of competition, the muscle memory still forms and is hard to break away from.

Part of my concern with Michael Carter-Williams isn't that he had problems in certain areas this past year, it's that his problems (turnovers, finishing at the rim, shooting off the dribble, defending through screens and pick and rolls) are problems that he's always had.  I would be a lot more bullish on his upside if I were more confident in his ability to correct these problems, and shooting is one of the major areas that I'm concerned about, as it limits his ability both as a playmaker off the pick and roll (where he turned the ball over on nearly 20% of his pick and roll possessions, and shot just 37% on his own field goal attempts), as well as his ability to fit into an offense where the ball might be dominated by other stars.

I'm not saying he can't fix his jumper, but I also do not view it as a foregone conclusion, either.