The Cavs are in win-now mode, and the Sixers are clearly the exact opposite of that.

Before we get started, let's start with a quick refresher on the particulars: Yesterday morning, the Sixers traded Spencer Hawes to the Cleveland Cavaliers for sixth-year swingman Earl Clark, second-year center Henry Sims, and both the Cavs' and Memphis Grizzlies' 2014 second-round draft picks.

In the sweet-shooting seven-footer, Cleveland received the best player in the trade. That particular point isn't really up for debate. On the other hand, the Cavs' rationale for surrendering two assets to acquire Hawes seems questionable.

This deal boils down to a tale of two ownerships, and more specifically, their differing views on how far their respective franchises are in the rebuilding process. In Cleveland, Dan Gilbert is hell-bent on making this year's playoffs. Conversely, Josh Harris has entrusted Sam Hinkie with the power to punt the season. After yesterday's continuous wheeling and dealing — Hinkie, channeling Oprah, can now give a second rounder to you, and you, and you — the Sixers are more or less treating the last 27 games like this:

Or, to invoke another former(?) Eagles quarterback, this:

The Cavs currently sit at 22-33, which due to the dearth of quality basketball teams in the Eastern Conference, is somehow only three games removed from the eighth seed. Gilbert, whose team hasn't made the playoffs since he started issuing formal decrees in Comic Sans, clearly wants back in. That's why he traded for Luol Deng in early January and now Hawes at the deadline.

This pursuit has come at a cost, though. The Cavs have now surrendered five picks (Deng cost a decently protected first, two seconds, as well a tricky swap stipulation that isn't worth delving into here) for less than a full combined season of two unrestricted free agents who are far from guaranteed to resign in Cleveland. The Cavs aren't risking their most important assets, but they are forking over a good amount of their other ones. 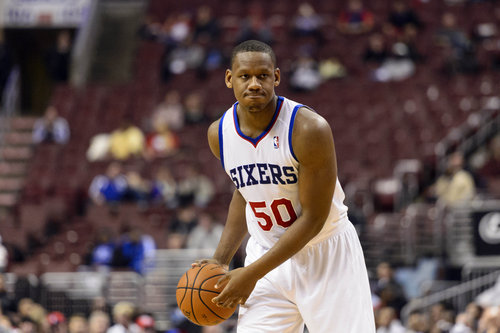 Moreover, it's easy to wonder about the long-term benefit of sneaking into the playoffs in a terrible conference while heavily leaning on a veteran with an expiring contract like Hawes. Again, the best-case scenario for this Cavs season is probably losing in five games to either Indiana or Miami in the first round.

Weirdly, the Sixers' last game was against Cleveland on Tuesday, and Hawes submitted possibly the worst audition since William Hung. Coming off a five-day layoff, he was almost impossibly lethargic, shooting 1-6 in the Sixers' 114-85 loss. Hawes' defense was actually far worse than that, and Zach Lowe went as far as calling the performance "a masterpiece of not giving a fuck." For someone who by all accounts seems like a great guy and is a well-liked teammate, it frankly wasn't very good. Here are a few of the lowlights:

Hawes does provide one clear and fairly important element for Cleveland: offensive spacing. Even after cooling off quite a bit, he's shooting 39.8 percent on above-the-break threes with a whole boatload of attempts. Hawes' three-point bombing can serve as a shot in the arm for Cleveland's 24th-ranked offense, particularly when he sets high ball screens for the extremely talented Kyrie Irving. Quickly enough, Cavs coach Mike Brown should learn that the big defending the screen can't stray far off Hawes at the three-point line.

The key for Cleveland will be coaxing Hawes' early-season form out of him. His offensive rating from the months of November to February provide a pretty accurate portrayal of his steady decline in performance this season: 112, 106, 100, and then a dreadful 81 this month. Hopefully for Cleveland, Hawes is due for a spring revival.

With a new situation and better players surrounding him, Hawes certainly has a chance to bounce back. There are concerns about a logjam in the Cavs' frontcourt and his mostly apathetic defensive approach, but Hawes can definitely help them. He remains a very skilled offensive player.

Draft Grades Around The Web

Trade Deadline in Review Draft Grades Around The Web

Similar to the Deng trade, it's also important to note that Cleveland didn't exactly give up the whole farm for Hawes. While certainly valuable, the two picks that they surrendered are still mid-second rounders. Hinkie can do some creative things with them like draft-and-stash European players, use the picks as final sweeteners in a larger trade, or try to simply hit on a high-upside guy with the late pick, but none of those things are easily successful.

At the very least, Hinkie has provided himself with extra flexibility, something he craves. While he undoubtedly was looking for a first-round pick in return for his starting center's services — if Hawes continued to shoot the ball like Dirk Nowitzki from deep, Hinkie might very well have — the market seemed like it wasn't there. Hinkie extracted something of value for a decent player that only has a few months left on his contract. Even if unspectacular, the two picks are a perfectly fine return.

Before the night was over, Clark and his 4.25 million dollar salary were waived to get the Sixers down to the maximum number of roster spots. He joined Ricky Ledo, Nate Wolters, and Glen Rice Jr. on the (wait for it...) MOUNT RUSHMORE of players who were only theoretical Sixers since Hinkie started, which is easily the most important Mount Rushmore list discussed in the past month

Clark hasn't performed well, which conventional wisdom would dictate that he'd be the perfect 2013-14 Sixer. Alas, he's 26 and most likely has reached his peak, which hasn't been part of Hinkie's M.O. all season. Even though he's a worse player than Hawes and Evan Turner, Clark is in the same age range and part of his development. I assume that's why he won't be suiting up in Philly.

Sims is a big body that has played sparingly for Cleveland this year, under 200 minutes total. He hasn't played particularly well in those minutes, but the Georgetown product will likely receive the chance to show his stuff in Philadelphia like the Daniel Orton's and Dewayne Dedmon's of the world before him. From our friends over at Fear the Sword (an awesome site that you should all go check out; some call it "The Liberty Ballers of Northeast Ohio"), Sims seems like an excellent teammate, which is swell.

Obviously, this move was all about the picks from the Sixers standpoint. While it was far from a home run, Hinkie hit a solid single here. There's nothing wrong with that.