Catching up on Zhaire Smith: areas of offensive improvement

Share All sharing options for: Catching up on Zhaire Smith: areas of offensive improvement

Zhaire Smith has been recalled by the Sixers in response to an injury to Josh Richardson. Really, Sixers fans would prefer Zhaire be called up for almost any other reason. And despite the Sixers being in need of some wing and backcourt production during Richardson’s absence, Zhaire has a steep hill to climb to meaningful playing time. Most likely, Raul Neto, Trey Burke, Shake Milton — these guys are going to get burn before Zhaire.

Nonetheless, Zhaire’s promotion is an exciting development. It’s a throwback to not too long ago, when the Sixers were drafting in the lottery and fans were comparing teenage prospects searching for the sort of upside that just might produce a stud. The unknown is exciting!

Despite being drafted about a year and a half ago, we don’t have much NBA tape of Zhaire to go on. But we do have his G League performance this season. And if that’s any indication, Zhaire has been polishing his game, developing a path to contributing to the pro squad in due time. He’s always profiled as a capable of average defense, at least. It’s on the offensive end in particular that he’s shown improvement.

While at Texas Tech, Zhaire Smith was often deployed in a role that asked him to contribute as a cutter who played above the rim. With elite verticality and athleticism in comparison to his NCAA counterparts, Smith found a lot of success scoring in such a role. When Zhaire wasn’t getting his points, rather than spotting up, he was racking up screen assists, springing teammates loose of their defenders for quality looks. Little of Zhaire’s offense came from shooting or spotting up, specifically very little from behind the arc — he finished his lone season in college with just 40 3PA.

With the Delaware Blue Coats this season, Smith is noticeably shifting his shot selection from his days at Texas Tech, attempting 6.1 threes per 100 possessions compared to 2.2 in college. (Matisse Thybulle is currently attempting 6.4 threes per 100 possessions.) He’s connecting at 36.5%, albeit on only 74 total attempts this season. An 0-for-4 drops him to 34.6%, a 4-for-4 gets him to 39.7%.

Rather than focus on the percentage of a small sample, I think the bigger takeaway ought to be that Smith looks comfortable transitioning to a more perimeter-oriented game. Zhaire doesn’t have the quickest release, but his shot is pretty up-and-down (as opposed to leaping forward on his jumper), which allows him to get shots up even with defenders in his grill.

If Zhaire has any chance of contributing to the Sixers this season, he’ll need to add value spacing the floor. Brett Brown has discussed his desire to “grow a bomber”. While I don’t expect Zhaire to shoot at any sort of volume to be labeled a bomber, Brown has given a longer leash to inexperienced players if they’re a consistent threat from behind the arc and that could be Zhaire’s path to playing time.

If Zhaire can combine plus wing defense with average three-point shooting, well that’s Matisse Thybulle’s formula. Thybulle is such a uniquely impactful defender in his ability to single-handedly blow up possessions, which is how he’s climbed to the role of spot starter. To ask the same of Zhaire is entirely too high an expectation. But Thybulle’s areas of contribution serve as a blueprint for how to grab Brett Brown’s attention.

A shot profile for the nerds

While Zhaire Smith has focused on expanding his range as a scorer, he hasn’t let up on attacking the rim either. His 83 attempts within 6 feet of the hoop make up 43.5% of his total field goal attempts, and he’s converted on nearly 70% of those shots (69.9%). 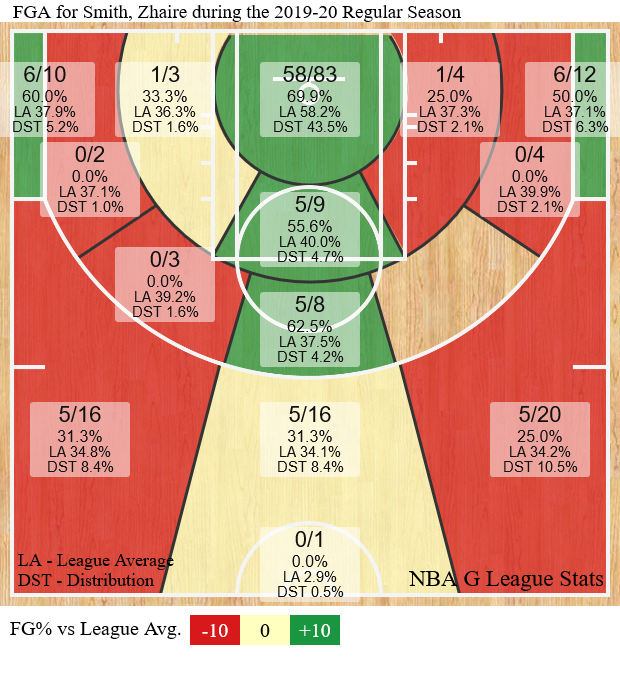 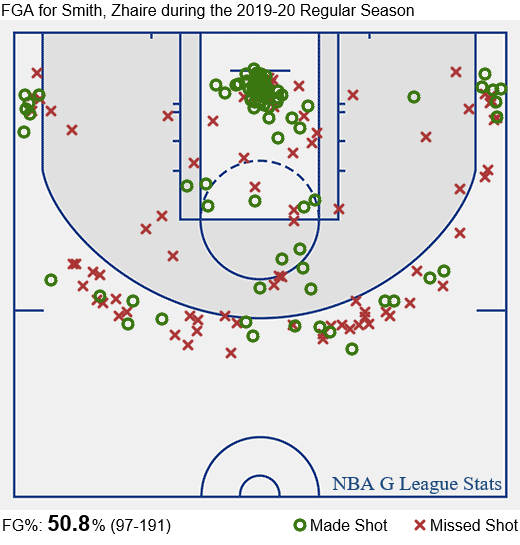 As the shot charts indicate in the image slider above, Zhaire has few attempts from the midrange. Thanks to his efficient shot selection, high conversion rate at the rim, and consistent three-point shooting, his true shooting percentage is an impressive 61.9% on the season with the Blue Coats (even more impressive when you consider he’s only taking a single free throw a game — they don’t call many fouls in the G League). Zhaire patiently picks his spots to score, limiting himself mostly to triples, transition leaks, and off-ball basket cuts. His cutting instincts are superb and when combined with his explosiveness, Smith’s defenders have been left in the dust.

Putting the ball on the floor

You don’t need to go back Smith’s Texas Tech tape to know that his handle needed work. The nicest way to describe it would be “stiff”. If Zhaire needs to dribble, we’ve seen him mostly stick to his dominant hand and straight line it to the hoop. It’s not as if he’ll need to pound the rock, but Zhaire’s dribbles are just begging to bounce off a foot out of bounds or be easily poked away by simply flailing a hand in there.

With the Blue Coats, Zhaire’s handle still isn’t where you’d like it to be, but he’s been put in position to use his dribble to create and has taken advantage. He appears to have gotten more comfortable switching dribble hands as well navigating around screens and hand-offs to get to the rim or create space. There’s still a lot of that straight driving, but he’s more fluid with the ball in his hands.

Brett Brown and the Sixers have been patient with Zhaire and have used the G League exactly for its purpose when it comes to Zhaire. While his “arrival” in the NBA could end up far off the trajectory of a typical lottery pick, Zhaire still has loads of talent. Despite it occurring outside of our field of vision, he’s been developing his offensive game. How much longer he has to go, I’m unsure of. But he’s coming along.