Are you not entertained? Fultz out, Boban in.

The Sixers are preparing for the playoffs for the 2nd year in a row after pulling off a big multi-team trade at the trade deadline. In the downtime with the team barely playing to win at the moment, let's revisit this part of the trade dust.

When all the TDL smoke cleared the Sixers had not only assembled a new super team core but also traded one curiosity of a player, 2017 #1 overall pick Markelle Fultz to the Orlando Magic, and pulled in another curiosity player, one Boban Marjanovic by way of the LA Clippers.

Forget about all the other details of the trades involved here. Fultz out / Boban in is the real story of the Sixers at the TDL. Fultz's story is not over by any means but it's continuation goes on location to Orlando where I think its going to get very interesting again next season in Florida with a hot young roster. Let's talk Marjonovic in Philly.

The shake out from all of Elton Brand's back door exchanges and smokey room dealings of 2019 NBA TDL resulted in curiosity player Markelle out, curiosity player Boban in. Sixer fans should remain highly entertained! 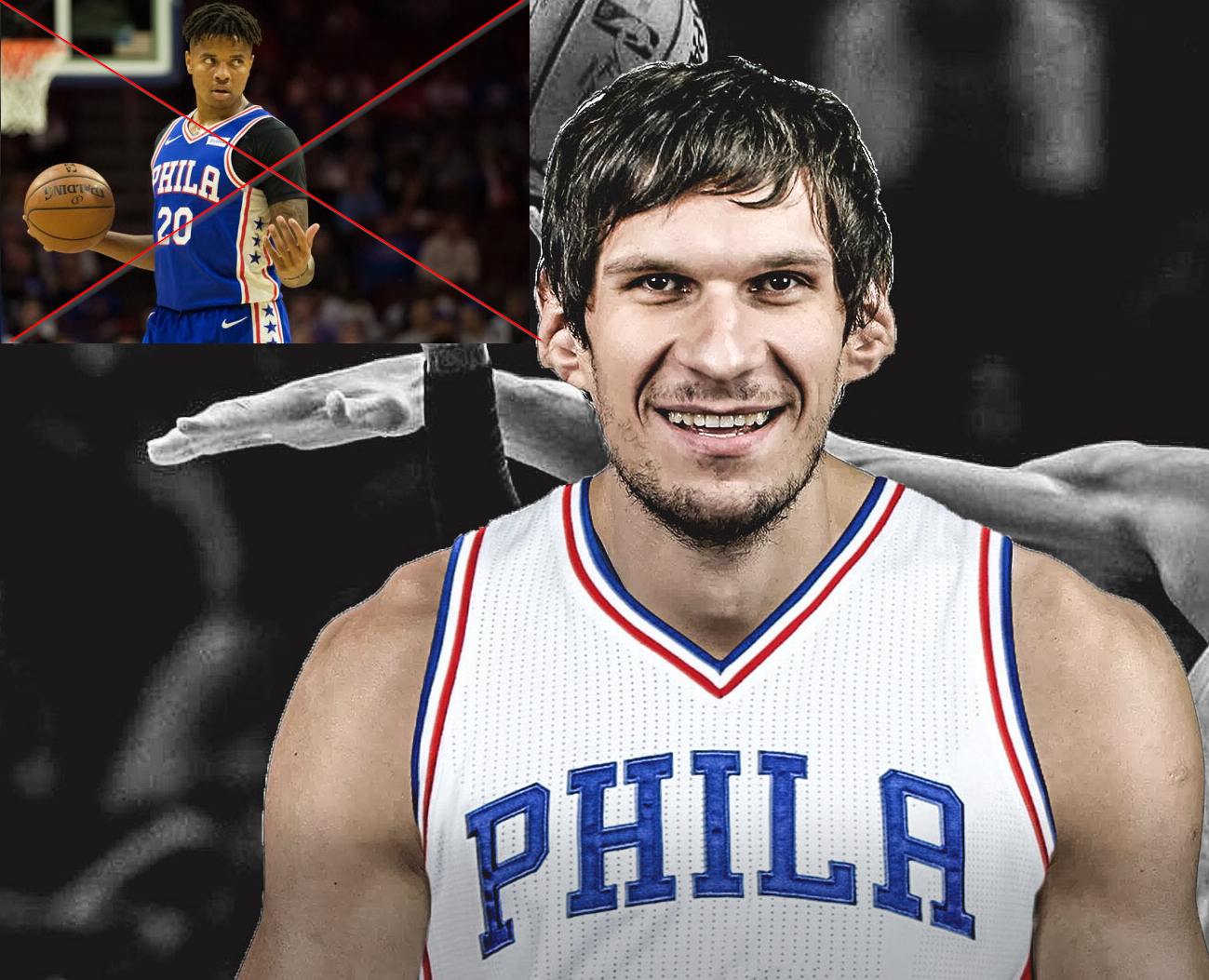 Now let me be transparent here a bit. My main reason for this post is really that I have hard time watching the way Brett Brown is using, or at time NOT USING the new Boban threat in the Sixers offense. At time they put the Giant in the post, near the rim on the offense but then just as often if not more they don't. Brown seems to want to play Boban on offense the same way he plays all his centers, high screen, hand off, pick and try to roll.

Boban in the foul line key area spending most of offensive potential working around the foul line out?
Not the way to win the Big Bob chess match. A top coach like Rick Carlisle eats him alive, placing a guy like Salah Mejri (an underrated, underutilized backup center himself by the way) on the floor and telling him he can try those 3 point shots he usually only gets to use in practice.

On the other end, the slight framed Mejri gets a break because GIANT Bob is NOT going down into the post trip after trip forcing Mejri and his team to try and defend this rare standing-dunk-capable monster close to the rim.

Big Bob, who yes its nice can shoot a little 3 too, should mainly be worked in to be that ultimate efficiency threat at the rim. If anything the Sixers should be HELPING Bob get that deep post position on offense because that's the only way he's going to win the give and take battle against opposing stretch 5 centers.

Ok, back to the Markelle/Bob comparison. Now I'm on the record as not being a fan of the Fultz trade and I've even labeled it as the first possible Elton Brand Blunder after the young GM had come through up until that point with a combination of great moves. Brand still deserves consideration as Exec of the year with his work on the Sixers, but I thought the team should have bitten the salary cap bullet and waited into next season before moving a potential blue chip lottery talent like that.

It was time to take all that ownership money saved during the process tank years and pull it out of the piggy bank for a little luxury tax period if need be to still sign Harris and Butler.

All that said, getting Boban Marjonovic the super giant to play back up on the same team with Joel Embiid the giant has tremendous potential on entertainment value alone and we've seen it already in his short time on the Sixers.

Boban is the only player in the league that makes Joel Embiid look, not small, but at least like a normal sized human by comparison. Its rarely ever going to be seen in a real game but imagine these 2 BEASTS on the floor at the same time!

Good luck to opposing defenses stopping a 2 point possession at the rim on a possession with Joel at PF and Boban at C.

But wait can he actually play?

To that point however, Boban, like Fultz should ultimately be much more than an entertainment curiosity story. Boban is a player that could, in theory at least, actually be a difference maker for the Sixers, especially going into the playoffs. This author Chris Herring in his piece on Boban says The Most Efficient Scorer In NBA History Is Stuck On The Bench. That is speaking of the Sixer's own big baby Boban :

Watching Boban's minutes in a game really helps you understand the game within the game that occurs when matching up of the Stretch 5 and new 5 out sets of the modern NBA big man with a serious inside powerhouse Big Man.

The most efficient players in modern NBA history

For players with a mininmum of 30 points per 100 possessions in 100 regular-season games.

Big Bob usage is something that requires serious NBA coaching strategy to work well. This also means with Brett Brown coaching Big EmBiid and Big Boban Sixerdom now has the potential for some bodacious alliteration as they seek to avoid Brand's Band getting badly beat again by Brett's Boys in Boston's Beantown.

(Sorry for that everyone).

Greg Popovich and Doc Rivers are highly respected NBA coaches. When they had Big Boban, they did a nice job exploring and getting productivity out of the NBA Giant in the limited minutes that he can really help a team in.

I love the potential for Boban behind Embiid to be able to put constant scoring pressure on the opposing defenses AT THE RIM. I'm not as confident that Brett will be up to the task of maximizing that matchup potential given what we saw Brad do to him last year and what I've been able to see so far of Boban's usage this year.

Its been, well spotty IMHO. Brett does seem to be growing as a coach though and he should have Pop on speed dial for this issue as long as the Sixers aren't playing against the Spurs. The playoffs slow down and half court offense becomes paramount. Right now, Brett Brown does not demonstrate to me that he has any clue how to weaponize 40 minutes of Embiid/Boban for efficient inside, at the rim scoring and FREE THROW making.

Yes both of these monster rim threats can also shoot free throws!
What a massive waste not to shove them down the throat of the Celtics/Bucks type teams with consistent inside out play. The Sixers also have enough players to pass out to and get great looks once teams desperately drop down to stop the 2 giants all game long.

Pop himself had to not only learn to work with Boban but even since then he had to learn to use Lamarcus Aldridge to his best potential after admitting as a coach that he was not doing so at first. Aldridge is a prototypical throw back NBA PF, not a modern stretch ready NBA big man. (Then the Spurs doubled down by adding another throwback player, a 2 point shooting guard). Pop to his credit figured out that he had to change his coaching approach and has been able to get the Spurs back into a very respectable Western playoff team.

The key here for these elite proficient inside Bigs is to totally ride out the players strengths, taking full advantage of what he CAN do at an elite level. That has to be run down the opposing defenses throat so much that it more than offsets their disadvantages and for Boban those disadvantages are significant.

Boban is worse on defense than he should be for his size. Sure, he's slow, we get that but he's actually not as slow as most other well 7'3" + massive players have been. He's much better athletically and faster than say crazy sized 7'7" Gheorghe Mureșan. He doesn't have the strength issue of 7'6" string bean Shawn Bradley and his straight line speed and lateral mobility looks as good or better than the great Yao Ming' was a 7'5"

Problem is Boban lacks something instinctively at the rim on defense. He should be aggressively trying to block shots that he often just sits there and watches go in! Its got to be annoying for coach to watch. You're on a low minutes. You can afford another couple of fouls a game. Why do you let people drive to hoop and score so easily without paying some price as you at least TRY and block the shot?

According to this guy's stat Boban CAN be effective at times protecting the rim.

On defense, by my eye test though, I don't get it. He's not going ever be Embiid but Boban should be better than he is as a rim protector. Struggling to offset a stretch 5 is one thing, but too many teams seem to feast a little too much against Boban inside. Even still though, 7 foot 3 mountain around the rim can at least gum up the works for the opponents until Embiid comes in or Brett decides to go smaller 5 with Jonah Bolden. Center position should be a major advantage for Philly all game long.

But, But, Boban on inside offense can be, should be a MONSTER!

Boban is not your average just-too-big-to-be-great or even useful slow center like a Pavel Podkolzin, Manute Bol, or Sim Bhullar or the fake draft picks like Satnam Singh.

Boban is extremely skilled offensively for a giant. He has to be played in limited minutes but that's fine when your starter is Joel Embiid.

Boban can at times be forced off the floor is the other team has hot shooting going, a hot stretch 5 or players that are just exploiting the spaces on the floor the Giant is just not getting to fast enough.

I'm going to repeat myself and fully vent here. What I don't get is why Boban is so often sitting out in the high screener area, with no attempt to get the Big Serbian positioned near the rim where he can wreck havoc on the defense and open up room for the Sixers shooters and other scorers when they have to double team him?

Against the Nets, in his early stretch the teams offense wasted Boban on offense, which allowed the Nets to make a big run. Later, the team adjusted and put Boban in the post where he more than offset the Net's small ball game by scoring inside so efficiently.

What took so long Coach Brown? Its like waiting too long in the playoffs to try something different with TJ against Brad Steven's wounded version of the Celtics. Why?

Why does Brett Brown go away from punishing the defense inside before the defense does anything to make him go away from it? Why not keep running the through the inside plays until the defense makes you change? See Lamarcus Aldridge.

Not that Boban is some sort of star even if used at his best. He's not. He's only great in limited minutes. That's why Pop advised him to take the big contract when the Clippers offered him an overpay.

That said, its time to FREE Boban, Brett Brown. Send the man to the rim, 80% of the time at least. Force the defense to stop him without racking up more fouls on top of the one's they're surrendering to Embiid.

The Sixers are still a hot curiosity with Embiid, Simmons, Butler all interesting stories but don't forget the Big Bob story could also be part of a winning playoff story line.

It's all at the rim, inside to out with Embiid/Boban. Don't beat yourself coach Brown.

Are you not entertained and what about this Big Bob thing?