NBA Super Trainer Drew Hanlen has been kinda quiet, like very, very quiet about Markelle Fultz's shooting during the the early part of his first season after training with Hanlen's "Pure Sweat".

Now we know why. He didn't want to say too much about the shooting form and percentages because he might say more than Markelle and Sixers want to reveal. Now with another trainer calling him out Hanlen let the cat out of the bag as to why he believes Fultz isn't shooting better yet.

Hanlen doesn't believe Markelle Fultz is 100% healthy yet and he also believes that the public, like this other trainer don't understand "what Markelle is dealing with" in terms of his health.

Truth is I suspected this to be the case but no one including Fultz or the Sixers will admit to it or discuss it.

Hanlen had already hinted strongly at this in an offseason interview while Markelle was still in training to rebuild the shot.

That was a strong indication that at the time, Hanlen knew that Markelle Fultz was still not 100% healthy.

Now we have Hanlen responding to another trainer saying flatly that Markelle is not yet 100% healthy.

For context, Clint Parks runs CPSA Training and has worked closely with Lakers’ second-year forward Kyle Kuzma, or as Hanlen describes him, "your man crush Kuz." Hanlen is the CEO of Pure Sweat basketball, so the "Pure Sucka" is an obvious dig.

"You don’t know his situation. He’s still not healthy," wrote Hanlen of Fultz, who has not appeared on any injury report this year, at least none that I can remember. It was understood that Markelle’s shoulder was 100% healed after he was listed with scapular muscle imbalance for the majority of his rookie season. 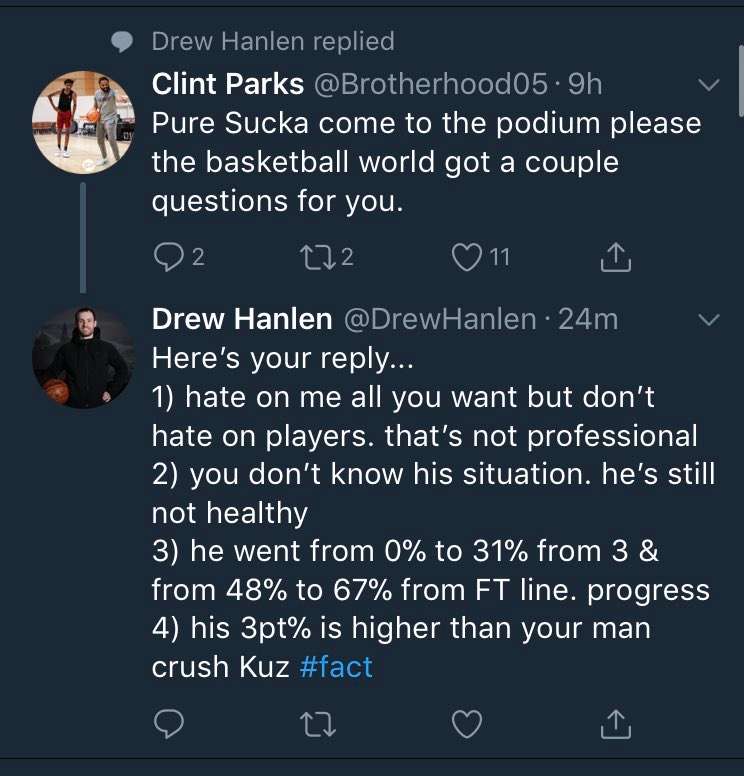 No wonder Hanlen has been silent lately. No wonder Markelle doesn't want to take those 3's.

Fans, media and no one else is going to want to hear about or accept an injury when the source of that injury has never really been admitted to other than that it just happened.
So now there can be no discussion about what effects the injury might be still having or what stage of rehab its in or what the long term medical prognosis might be.

Its a mystery injury. So the way to handle it?

Its not there. Its not 'yips' but its also not a problem anymore. No more physical problems.

Fultz said in his interview with Isaiah Thomas that his body would not do what he tells it to do although he also claimed to be healthy now. Here's the interview beginning with the discussion of the Markelle's mystery injury.

I think what Hanlen let slip is very likely the fact behind Markelle Fultz's mysterious struggle to regain his shooting ability or even get back to 'average' professional level.

Looking closely at this shot should make it obvious that all is not well with that shoulder.

Something is definitely not normal there. Its not "yips". Fultz clearly formed his shot and tried even hold his form and follow through as a good shooter should but something went wrong in that arm.

This was also seen in some of Fultz's pre season pre Hanlen practice videos, a shot would just go wildly off, like REALLY wildly off and particularly it would happen at the longer 3 point shooting distance.

I called it a "trick shoulder" because it seems to go off without warning and Fultz himself seems surprised when it happens.

No Fultz or Sixer Doctors are going to explain what might be happening here because they're already said there's no physical injury now and Drew Hanlen better stay in line if he knows what's good for him! .

I'll stay interested though in what happens to that mid-range shot. Fultz seems to have better control there so he should get those Derozan jumpers up, confidently and frequently, make or miss. If he can hit the mid-range better and better and keep improving on the free throw, he can still create good spacing for his team until the 3 pointer comes around, even if its not this season.

Since the Jimmy Butler trade occurred after this post, my updated opinion:

1) Jimmy Butler opens the window for contention now but it doesn't make Philly the favorite. If you throw all your asset chips into the win now basket then where is your potential 3rd star help coming from as Butler inevitably ages out while Embiid and Ben are in their full prime? Sixers won't see a #1 overall talent again for a long time.

They have one now who is rehabbing. Patience.

2) You don't need Markelle to be a star this season. He really only needs to play at Net 0 or so because the Sixers can add the necessary shooting for this season to what they already have. Reddick, Muscala, Shamet even Korkmaz is still here for this seasons run (If they had a little more with Korkmaz they wouldn't be desperate a short term ancient Korver right now. ) and that's without adding a Korver or someone else. An Ariza would be fantastic but even then Fultz is not required to get him if that's the path of choice for the shorter term.

3) The body heals and restores itself over time. This is the general fact we know. If you don't fall into the ignorance based 'its all a mental issue' camp which is basically a complete non explanation of the problem then you see that there has already been some some slow but sure healing compared to Kelle last season. If you consider there is still some physical rehabilitation taking place with Fultz (just look at the SPASM video for solid evidence), then you follow your best medical advice.

The catch to all this is that we the public don't know what that medical advice is. The Sixers and Fultz ain't saying. You don't sell low because you the Sixers have the full insight into the true health status and prognosis of your own blue chip draft pick. The Sixers aren't talking about the medicals so we can only read their actions. The actions are, knowing the most about his medicals, the Sixers have been playing him. In fact they've been starting him. Even if they move him to the bench, which they do already in the 2nd halves, they still believe its best to keep playing him. That must be what the best medical prognosis is telling them they should do.

There's always the possibility it could be decided due to regression that surgery might be needed but right now they believe the right action is keep letting Markelle Fultz play through the rehabilitation of his game.

My series of fanposts on the topic.

What ya think? Is Markelle Fultz 100% Healthy or Not?