Thanks the rare trade of a #1 overall pick which swapped the two players people will always compare the careers of these 2 players and already are even though Fultz's career hasn't really even started. 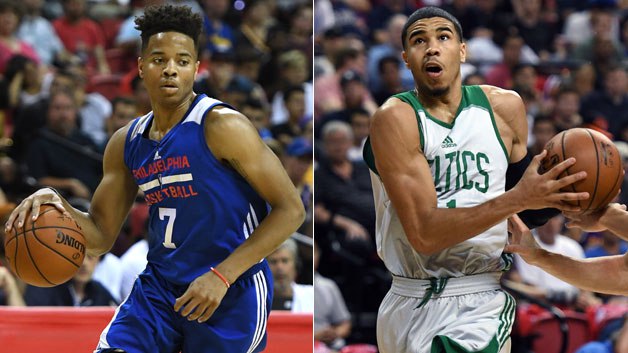 Most of the NBA buzz right now has Danny Ainge and Boston 'winning' the big trade of the #1 pick for the #3 + future 1st rounder. Some are even saying Danny Ainge fleeced Bryan Colangelo and the Sixers.

The reasons are pretty obvious. Bostons team is super hot and Jason Tatum who they picked with that #3 pick is staring and playing quite well in the Boston system. While Tatum is having an outstanding rookie start on the team with best record in the NBA Markelle Fultz the #1 pick is riding the pine with an injured shoulder.

What makes matter really appear worse is that the Sixers for some odd reason decided to the let the rookie start the year playing even though he was clearly injured and not able to shoot anywhere near what his displayed in both college AND the NBA summer league.

So with all this craziness, is there any way the Sixers could end up not coming fleeced in this trade?
Is there even a way they could actually 'win' the trade ultimately from a Philly perspective?

Sure. The trade could ultimately still end up a win from the Sixer point of view.

Boston of course is very unlikely to ever view the trade as anything less than a win. Tatum was for the them the perfect combination of both FIT and TALENT for their roster. They had a logjam of talent at the guard position and one of the top talents in the entire league coming in to run the PG position, Kyrie Irving. They didn't need depth there either with Smart and Rozier in house. On top of that they had Gordon Hayward coming in to stack the wing combo scoring role with Jaylen Brown. There was no place to really use the consensus #1 overall PG on their current roster.

Philly on the other hand had a perfect fit for Fultz. Even if they assumed Simmons would be great at PG the ideal fit for their roster was a guard to play with Ben that could shoot and score with Simmons but also take over the floor direction when Simmons goes out. A guard with size and a good defensive profile on top of that would be ideal.

Fultz was the perfect 'fit' for a team that had been drafting for BPA in recent years and took on a few bad roster fits as a result. The trade made too much sense, the only question had to be, the price. Danny Ainge is too smart to take a player mocked by most at #3 or less in the #1 spot. That represents wasted value.

Some team was going to pay for that value. Current discussions tend to forget that Philly wasn't the only team that could have giving Boston value for those draft positions to obtain Markelle Fultz.

Some like to assume with hindsight that Philly could have simply stood pat and picked Fultz with #3 pick. Let's revisit a little of the discussion at the time for those with super short memories.

Former Washington star Markelle Fultz worked out for the Lakers Thursday, and director of basketball operations Magic Johnson "is in love" with Fultz, according to Jonathan Givony‏ of Draft Express. Givony sent out a series of tweets Friday, saying Fultz "murdered" his workout. He reportedly shot the ball "very well," showed off a 40-inch vertical leap and played some 2-on-2 competition.

But Fultz is the consensus No. 1 pick, and since the Lakers hold the No. 2 pick, they would likely have trade up to get him. Givony says "multiple sources" indicate the Lakers might be willing to move forward Julius Randle and the No. 2 pick to Boston to get that coveted No. 1 selection.

Also keep in mind that not only was LA in play as a possibility ahead of the Sixers but if Philly didn't trade up get Fultz, Boston could have contingency plans in place to trade down to another high lotto team as Fultz was the consensus #1, Lonzo was almost guaranteed at #2 if the Lakers didn't move up and there a possibility that Tatum could have easily went anywhere in the top 5 although probably not much lower in the draft. Philly was most talked about for Josh Jackson who some thought was worthy of a #1.

As reported right here at LB other teams were rumored to want a shot at Fultz.

Given how far ahead most of the league views Fultz as a prospect, there’s no real value for him to work out for other teams unless he and his agent believe someone else could end up with the No. 1 pick on draft night.

Unless Boston’s draft evaluation team sees something the rest of the NBA doesn’t, the justification for trading down from the No. 1 spot is obvious—they want to trade out altogether and execute a deal for a readymade star, a la Jimmy Butler, while trying to preserve their depth and future assets. That means looking for teams with multiple high-value picks or young players to assume part of the cost.

In that scenario, the Kings make a lot of sense, but the Sixers are also perfectly positioned to join up on a deal with the Celtics at No. 1. They own their own top-three pick this year, a couple valuable future picks from the Lakers and Kings, and exciting young players like Dario Saric.

So we can see there was no "fleecing" in any case. Boston had leverage. The #1 pick and a consensus #1 even if not a unanimous #1. There was competition to get Markelle Fultz. Colangelo was going to have pay up if he wanted to be sure and their perfect fit player in the form of a #1 overall NBA talent.

Tatum has already established that he justifies his draft slot. The 2nd question to consider in Fultz vs Tatum then is whether Fultz will be good enough to justify the Sixers pick + trade value. Some have even suggested Fultz might already be a bust, an ultimate knee-jerk sort of reaction to say the least.

Did people forget how Fultz played in NBA summer league before he was injured? Sure we know SL is only a minor indicator but it is the first real pro experience and other picks from the draft, Tatum and Mitchell for example were giving early indicators of what we see now in the NBA regular season.

Fultz looked about as good as any rookie and his stroke and shooting were fine just like it was in his college career.
17 Pts, 3 Blks

Markelle Fultz Full 2017 Summer League Highlights Compilation - 16 PPG, SiCK Moves!
Fultz very tiny sampling of minutes and games in Summer was actually right in line with his college game that got him drafted #1

The win or loss from this trade may come down to the Lakers and Kings picks and how they play out.

If Philly gets the Lakers pick in a nice mid lottery position 2018 they could get just they need to complete a strong bench at rookie contract wages. A nice productive young wing like Mikal Bridges would mean Philly never misses out on player like Tatum while they added the right fit to their core rotation in rotation.