In this edition of the Sunday Morning Shootaround, the 76ers head to Spain, Pierre Jackson shows off his superhuman healing powers, and we'll tell you why that jersey you just bought is now a throwback.

Share All sharing options for: 76ers' Sunday Morning Shootaround: From Spain With Love

In the beginning, there was this. A single, sepia-toned photo of Nerlens Noel, Michael Carter-Williams and Joel Embiid bonding post-workout. The fact that two of the three men in this picture wouldn't get a clean bill of health if the season started today doesn't even matter - this image alone was enough to set the collective hearts of Sixers Nation all aflutter. But this was only the start...

Apparently, the trio decided to take a trip to Spain to show their support for the newly-drafted Dario Saric. Brett Brown was in the house as well (he's probably still coaching the Australian team on the QT), and even GM Sam Hinkie (or "Sam Hickie" as he's known in FIBA circles) emerged from the cave that most Philadelphia media members think he lives in and hopped across the pond to do a little scouting.

With Sixers Voltron finally complete, there was only one thing left to do...

And thus began The Courtship of Dario Saric. According to eyewitness accounts, "Clique" by Kanye West was playing in the background as this photo was taken. Make your preparations now: Sixers' Media Day in 2016 is going to be THE BEST.

(Brief aside: It must be nice to be able to call your boys up and say "Yo... let's go to Spain," and land in Barcelona less than 24 hours later. Though, after watching this Vine, I thought about making the trip myself.)

(Another brief aside: I have no idea who was running the Liberty Ballers' Twitter the other day, but this response to the group picture was/is golden.)

Fresh off the plane, konichiwa bitches
Turn around another plane, my passport on pimpin'
-- Kanye West, "Barry Bonds" (and Joel Embiid, too... probably) 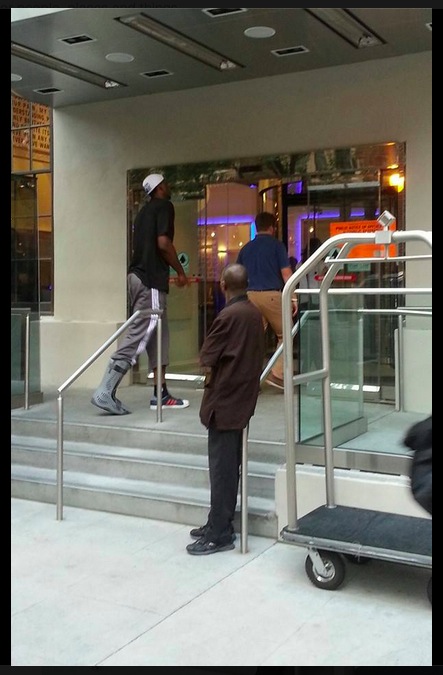 Shout out to Friend of Liberty Ballers/personal friend Jet Marcial who ran into Mr. Embiid in front of a downtown hotel on Friday afternoon. Minutes later, the cornerstone of the Sixers' rebuilding project did what most millionaire athletes do shortly after returning from a European vacation...

Currently on that GTA San Andreas for PS2 then Smackdown Vs Raw. PS2 is classic

Speaking of Yeezus, MCW and Jerami Grant engaged in a spirited debate about the five best rappers in the game, and neither bothered to mention Kanye West (or, for that matter, Kendrick Lamar). I knew we should have kept Elfrid Payton.

Here's video of Wolverine Hugh Jackman Pierre Jackson shooting jumpers about three hours after rupturing his Achilles during the Orlando Pro Summer League. Not to be outdone, Jason Richardson - yes, he's still on the team - recently posted a workout clip as well. Sadly, Jason's been out of the mix so long, he doesn't realize that we don't shoot long 2s here anymore.

Public Service Announcement No. 1 - To all of those who purchased a Joel Embiid #11 jersey: You now own what's officially called a "throwback." As a result of Thaddeus Young's departure, Embiid will now wear #21, adding his former #11 uniform to the pantheon of great, rare jerseys that I plan on purchasing the day after I hit Mega Millions:

Public Service Announcement No. 2: The Sevens are looking for a few good men. For $150, you can try out for a professional basketball team, and considering the fact that 29 players suited up for the 87ers during their inaugural 50-game season, there's a pretty good chance that you'll make the squad.

The link to the sign-up form is here - feel free to lie about your height and weight since everyone else does it anyway.