On the eve of media day, the Philadelphia 76ers filled out their training camp roster by claiming 6'6" small forward Chris Johnson off waivers from the Boston Celtics.

According to ESPN's Marc Stein, the Philadelphia 76ers claimed guard/forward Chris Johnson off waivers on Sunday afternoon. Johnson was initially waived by the Boston Celtics last Thursday in the aftermath of the deal that sent current Sixer Keith Bogans to Cleveland.

Johnson, a third-year swingman from the University of Dayton, began last season with the Rio Grande Valley Vipers, averaging 19.4 PPG, 6.8 RPG and 2.5 APG in 20 games while shooting 47.0 percent from the floor and 36.7 percent from beyond the arc.

For what it's worth, the Vipers' offense last season was the stuff of legend (thanks in large part to direction given by Houston Rockets general manager Daryl Morey), and based on Johnson's D-League shot chart, he'll fit in just fine here with the Sixers. 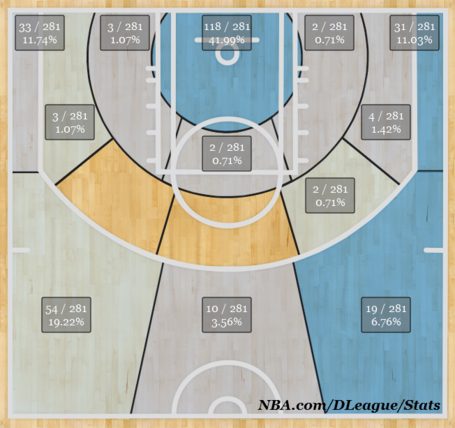 Boston signed Johnson to an initial 10-day contract on January 16, and later reached an agreement to keep him around for the rest of the season on February 7. In 40 games with the Celtics, the 6'6" Johnson averaged 6.3 points (on 39.7 percent shooting) and 2.4 rebounds per game.

Following the move, the 76ers appear to have 21 players with some sort of contractual obligation for next season (not including second-round picks Jerami Grant and K.J. McDaniels, both of whom are unsigned), so it remains to be seen what the final training camp roster will look like once the dust settles over the next couple of days.