In the latest installment of "Sixers Swag", we've found the five most unique items related to our passionate, intense and proud franchise and wrote 2,200 words about them. Enjoy.

Thanks in part to the team's 19-63 record last season, finding quality 76ers-themed gear and memorabilia is becoming an increasingly difficult task. To that end, it's a good thing that Al Gore invented the Internet (which, subsequently, led to the creation of eBay): Without the fabulous World Wide Web, Dave Rueter and I wouldn't have been able to write three installments of Sixers Swag (Volumes 1 and 2 can be found here and here). This latest installment is dedicated to the 23 people who actually read it on a regular basis... 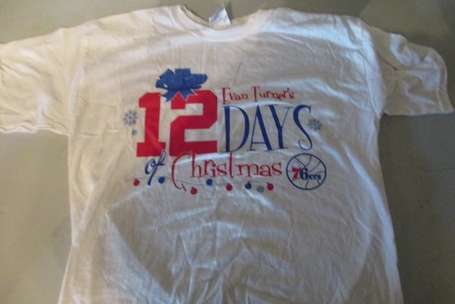 Roy: I feel bad, Dave. Jake Pavorsky's 18th birthday has come and gone, and we didn't even take the time to properly commemorate the occasion. That ends now.

A youth XL may be a lil' snug for our man Jake, but tell me that he wouldn't be the envy of College Park in this "Evan Turner's 12 Days Of Christmas" T-shirt. Maryland's in the B1G Ten now and nothing says B1G like a T-shirt honoring the biggest Sixers' draft bust of the past decade. Ignore the wrinkles: With a hot iron and a little bit of TLC, this shirt will come out smoother than an Evan Turner corner jumper.

The Buy It Now price of $3.76 is too tempting to pass up. The fact that Jake is Jewish really shouldn't stop me from pulling the trigger on this one, should it?

I was considering reaching for another taco shell, but if I'm going to squeeze into a youth XL, I better grab the carrot sticks instead. Hold the ranch dressing, please. I'm carb-counting. 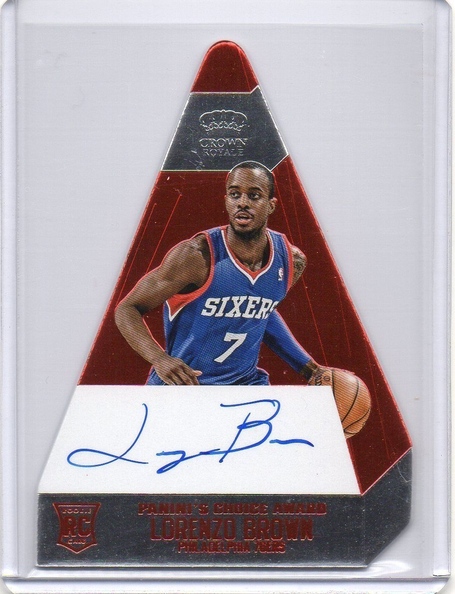 Roy: As Stephon and KG once told us, it's all about being tasteful.

Amidst all of the fawning these past few weeks over Mr. November, I regret not having the foresight - or is it fore2ight? - to stock up on Derek Jeter rookie cards back in the mid-90s. Unfortunately, there's no way for middle-aged me to send word back to teenage me - all I can do now is make wise investments so that the entirety of my golden years isn't spent pinching pennies so that Allen Ezail Burton can go to whatever college his little heart desires.

Of course, there are multiple ways to secure one's future. Pension plans are nice, and a 401K is always a smart move, but I think it's time to think outside of the box. Sure... I may have missed out on the Alibaba IPO, but who needs .000001% of a company when you can have 100% of an autographed Lorenzo Brown rookie card?

The team at Panini was ahead of the curve on this one: The card is even cut in the shape of one of the safety cones that Lo Brown used to swerve around on I-95 his way to 87ers' games. Between this and my 1989 Billy Ripken Fleer card, I'll have the makings of a pretty good collection.

But now? I could decorate my bedroom wall with Griffey rookie cards. I miss collecting cards. I used to collect vintage baseball cards, and had owned a 1934 Goudey Jimmie Foxx that loved me unconditionally.

(If I was in a band, we would be named, "Benoit and the Benjamins," and cover mostly Third Eye Blind. But that's a discussion for another day).

Regardless, I'm very interested in this piece. I was in attendance for Lorenzo Brown's first NBA bucket. We're practically blood brothers at this point. 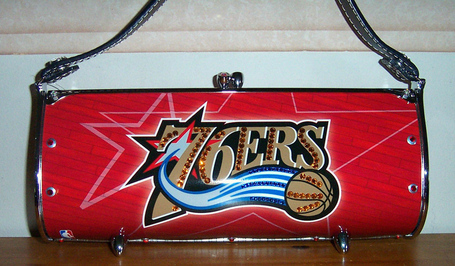 Roy: Dave... I wish you would step back from that ledge, my friend... and take a gander at the next thing I've lined up for you.

There are less than 90 days until Christmas... who has time to spend in lines when there's Synergy film of Luc Richard Mbah a Moute to break down?

Skip the madness of Black Friday with this Cyber Monday special that I stumbled across on eBay. Who wants to live a semi-charmed kind of life when you can have a 76ers' purse fully bedazzled in Swarovski crystals?

(Swarovski is based in Austria, so you know that these crystals are of the highest quality. I'm talking the Chris Ford of crystals.)

Not only is this a $250 bag at more than a 60% discount, but it's a hell of a conversation piece for that special someone in your life. Don't be deceived by the size: It's large enough to hold every ticket stub from each of the 76ers' 19 victories last season.

I just hope that LB Wifey isn't reading this - we wouldn't want to ruin the surprise.

Dave: A bedazzled Sixers purse made with Swarovski crystals?

Is there anything you can't purchase nowadays? Does any woman reading this own a Sixers bedazzled purse? If so, I kindly ask them to step-forward, because I know like seven-to-eight single guys on the LB writing staff who are dying to meet you. DM me.

But let me play devil's advocate for just a moment, Roy. Is the Sixers purse too much? I could imagine a young Roy warping back to Finnegan's (R.I.P) in 2003 and locking eyes with a girl across the bar. A girl who was rocking denim shorts and an Aaron McKie jersey. You'd buy her a drink, talk about your favorite Vanessa Carlton track; maybe discuss Eric Snow's intangibles, and playing the right way. Just another magical night on Spring Garden.

But locking eyes with a girl holding a bedazzled Sixers clutch? I got the good sense to backpedal all the way to Tiki Bob's. I can't trust someone who was that invested in the Kenny Thomas Era.

(I did ask LB Wifey what she thought of the purse).

So there ya go. 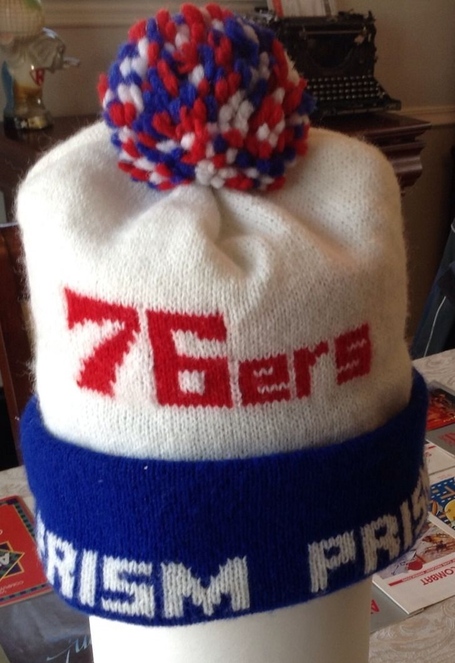 Roy: I'm amazed at how startlingly accurate your [Swarovski] crystal ball is. But in the interest of full disclosure, I was more of a McFadden's guy back in 2003. $1 you-call-its and half-price appetizers from 6-8? It's a damn shame that Uber didn't exist back then: Those long walks to the Spring Garden El station were the worst, especially in the winter. Speaking of which...

I haven't seen a single episode of "Game of Thrones", but I do know enough to say "Winter is coming" whenever the water cooler conversation turns to TV. That phrase, of course, is a double entendre, but the fact remains that December will be here before we know it. And I don't know about you, but I think it's nigh time that we get ready for the impending cold by spending some of our hard-earned money on this fine 76ers/PRISM wool hat that will pair nicely with my 1995 Willie Burton throwback.

(In case you were wondering, he and I aren't really cousins, but I've been known to casually drop his name at the host stand if I think it'll get me a good table at P.F. Chang's.)

I know $30.55 shipped is a bit pricey, but I can't think of a better way to express my love for the two most formative organizations of my adolescence. When I think of the things that defined my teenage years, late-night PRISM movies and Sixers' basketball rank just below En Vogue's "Giving Him Something He Can Feel" video.

Besides... who can say no to an item description like this: "For Auction is a very cool and rare 76ers / Prism wool hat. The Sixers may suck but it doesn't mean your hat has to."

I wonder if I can pay for this with my Citi rewards points...

Isn't this world a crazy place?

Just when I thought our chance had passed.

You go and save the best for last." - Vanessa Williams

(I have no idea if this is the last item).

$25!? You want me to pay $25 for this used hat, Roy? Are you crazy? I was ready to spend $2,500 for this hat. This hat is GORGEOUS. Frankly, I'm not sure I can brave another winter without this cap covering my dome. It's perfect. Look at the font, the block letters. It's like this hat was printed from an old Macintosh.

PRISM, if memory serves, only aired:

It's like the channel was created specifically for me. And the only movies I remember PRISM airing were The Fugitive (my favorite movie of all time), Of Mice and Men, and To Kill a Mockingbird. PRISM was a godsend for the procrastinating Delaware Valley junior-high student who had a book report due. Forget the cliff notes. Let Gregory Peck do the heavy-lifting.

Do you really own a Willie Burton jersey? Have you been holding out on me this whole time? Speaking of, let me just leave this here. (Arguably the greatest two minutes and twenty seconds of my life). 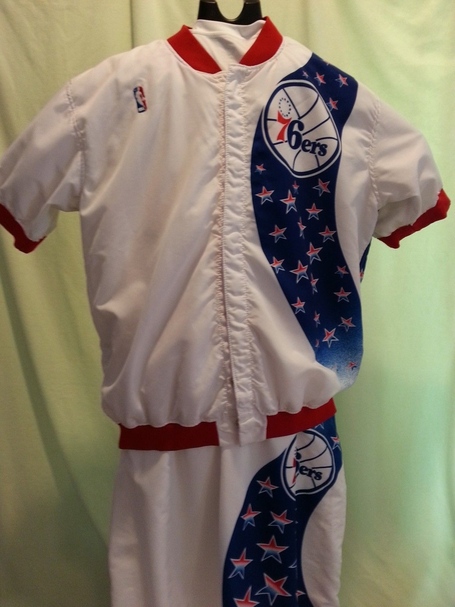 Roy: I'm not going to lie: Much like the smoke monster in Lost, the items that I presented to your earlier were merely plot devices meant to fill time until we got to this point. But unlike Damon Lindelof, I always knew exactly where we were headed before I ever sat down in front of the keyboard.

And here we are.

Shawn Bradley. Game Worn. Warm-Up Ensemble. There's really nothing else that needs to be said. Part of me wishes that I was 20 years younger... I mean, I looked pretty damn sharp when I arrived at school for the first day of 10th grade, but wearing this would have shut the game down.

The guy at the LA Fitness who strolls in with the Nike headband, the "Basketball Never Stops" T-shirt, the LeBron XIs and the matching Nike Elite socks? Fraud. Poseur. But the man who steps onto the floor with the complete 1993-94 Philadelphia 76ers warm-up set? There someone who means business. If you think the triple-double Ice Cube put up in the "It Was A Good Day" video was something, you haven't seen anything yet.

For weeks now, I've been trying to convince the wife to let me take $400 out of the joint account to buy an Xbox One. My argument that it's a "home entertainment system" has fallen on deaf ears to this point. But it's clear that her reluctance to approve the purchase of such a frivolous item was merely a sign that I should exercise patience until something better (read: a Shawn Bradley warm-up set) came along. And if I'm wrong on this... it's easier to ask for forgiveness than to ask for permission, no?

Dave: Frankly, I don't want to live in a world where you can't spring for a Shawn Bradley game-worn warm-up ensemble. We work forty hour weeks solely to fund our stupid purchases, Roy. It's in our DNA. Now, personally, I'm not sure that my shmedium frame is built to wear the clothes of a 7'6" man, but you do you, Roy. (I'm holding out for the Greg Grant warm-ups myself).

I was expecting the jacket to look bigger - warm-ups that took up the entire screen. Is this all an illusion? Objects in the mirror are closer than they appear? I once held in my hands the game-worn jersey of Chris Mihm, and I'm convinced it could have blocked the sun. But this jacket is perfect for all seasons. A jacket to wear to Sunday services on a crisp autumn morning. A button-up to wear over your business-casual work attire. I fully support your decision to purchase this, Roy, and if it would help, I'd be willing to schedule a conference call with your wife to discuss the financial ramifications.

Here's the crux of my argument:

"Better this than an Andrew Bynum jersey, Mrs. Burton."

On a related note, I would like to formally invite you to our Halloween party this year. This year's theme is "Sixers Big Men." Bradley (you) and LaSalle Thompson (me) could be quite the formidable pong team.

Roy: I'll keep an eye out for the Greg Grant Warm-ups, Dave. But in the interim, here's a Casey Shaw shooting shirt to tide you over.