In Part 1, I discussed how building Philadelphia's depth will be just as important as gathering star players. Henry Sims already seems to be a good piece going forward, and here I'll talk about the guy who may very well be the most important player on the 76ers this season: Hollis Thompson.

Well OK, maybe "most important" is a bit of a stretch for a player who averaged just 6 points per game last season, but he’ll be more valuable than you may expect. Just take a quick look at what Philadelphia’s roster is set to look like for this season.

After you’re done wiping away the tears from your eyes, you might notice something: nobody on this team can shoot. Jason Richardson is the only player besides Thompson to have a career league-average 3-point shooting percentage, and who knows how much playing time he’ll be seeing this season.

And in a league where 3-point shooting is valued more than ever, this can be a problem. If there’s any reason to be excited about watching the Sixers this season, it will be to see Michael Carter-Williams run pick-and-rolls with Nerlens Noel, Tony Wroten attack the rim like a maniac, or K.J. McDaniels put his freakish dunking ability on display. But we won’t be seeing a lot of this if the Sixers are constantly met with a wall of defenders at the basket.

And being able to draw those defenders away from the paint is what makes Thompson so important, at least for now. But is he just short-term filler, or can he contribute in ways to make him a part of Philadelphia’s future? And more importantly, can he sustain the same shooting that we saw from him last season?

Can He Do Anything Besides Shoot?

But he’s a creative shooter, and that’s important. If you take a look at his shot chart from last season (compliments to Nylon Calculus), you’ll notice that there weren’t too many areas where he struggled to hit from behind the arc. 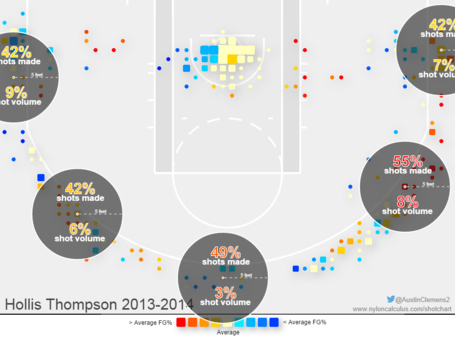 This versatility as a shooter will be crucial to Brett Brown’s playcalling next season, as he’ll be able to creatively place Thompson anywhere on the floor to pull defenders away from certain areas and give more room to the other four players on offense.

And as basically the only guy on the roster who can shoot, we should expect to see a few more plays getting drawn up for Thompson than we saw last season. He proved that he can effectively move off the ball and fire off quick shots in somewhat of a Korver-esque manner. He did this quite efficiently too, shooting 46.2% and 43.8% from downtown coming off of screens and handoffs respectively, according to Synergy Sports.

And this didn’t just apply to 3-point shooting either. Thompson showed both a sneaky explosive first step and leaping ability last season, allowing him to become a very decent finisher when cutting through the paint. And because his defenders needed to stay so close to him at the arc, he was able to easily lose them and keep them guessing on where he would go next.

But this is basically the full extent of Thompson’s offensive abilities so far. His handle is still awkward, and he struggles to create his own shot when putting the ball on the floor. He doesn’t attack nearly as confidently when driving to the rim with the ball as he does without it, and his hand-eye coordination seems, um, a bit off when he's taking defenders off the dribble.

This could be fixable though. He was able to take smaller guards off the dribble and attack the rim with ease last season, but whenever he met bigger defenders at the rim he would lose focus and make bad decisions. He’s shown that he can finish at the rim, and if he polishes up his ball handling he should be able to attack bigger players with more poise.

But to make things worse for him as far as this goes now, he’s also not a great passer and often turns the ball over when he tries to find a way out of these awkward finishes. He lacks floor vision and gets flustered whenever he’s put in a situation where he has to give up the rock, and he’ll usually overthink it and force the ball into a tight spot instead of looking for simpler options.

Improving these traits might not be so important anyway, as we can assume that he’ll be sharing the floor with mostly ball-dominant guards this season (Carter-Williams, Wroten, and Shved to name a few). He’s a natural fit into Philadelphia’s motion offense, and should be one of the team’s more reliable scoring threats this year if he can consistently create and hit open shots by moving off the ball.

This is an area where Thompson has the potential to develop into a much larger role in Philadelphia’s long-term plans. He played one-on-one defense as well as you could’ve expected from him last season, and could be trusted when defending both guard positions and small forwards. He plays defense "the right way" as a guy who always keeps his feet moving and rarely gambles, and he basically worked as hard as anybody did defensively for Philadelphia last season.

His long arms and defensive instincts make him a problem for smaller players too. He was great last season when Philadelphia would ice or trap pick-and-rolls, and he knew when he could easily back ball handlers into a corner without giving up an open scoring opportunity elsewhere.

Don’t get me wrong, we shouldn’t expect Thompson to ever be an all-purpose lockdown defender like Kawhi Leonard or Paul George; but if he keeps working the way he has, he definitely has the potential to be above-average on this end.

There’s still plenty of work to be done before he can get to that point though. As I wrote a little bit about here, Philadelphia likes to run a "pack-the-paint" style of defense where it brings as much help as possible to the paint whenever the offense threatens the middle of the floor. This style of defense is extremely demanding of wing defenders however, and basically everybody on Philadelphia’s roster, including Thompson, struggled to keep up last year.

Being able to recover from the paint back to the arc wasn’t necessarily the problem for Thompson though, as he was mostly attentive and could use that quick first step that I talked about earlier to quickly shift between the two areas. The problem was more in how he recovered, where he would either apply the brakes way too late or just totally bite on a jump-fake. He did this nearly every time he would recover to the 3-point line, and it often would lead to an easy basket for the ball handler.

This can be a huge problem if he doesn’t learn to fix it. It was hard to tell whether his difficulties here stemmed from timing issues or if he just is physically incapable of stopping himself in time, and the latter is much tougher to fix than the former. Another factor could’ve been that Philadelphia’s rim protection was an absolute atrocity last season, and this forced the wings to help way deeper in the paint than they should normally have to.

Hawes inexplicably guards Sacre about 18 feet out on this play rather than dropping back on the pick-and-roll, and this forces Thompson to leave Young completely alone in the corner in order to cover the paint. By the time the ball comes over to Young, Hollis has to run back and has way too much momentum under him to stop in time. Easy bucket for Swaggy. These are the kind of problems that we should see less of next season when Philadelphia replaces rim protectors such as Byron Mullens and Spencer Hawes with Nerlens Noel.

Thompson would also do well by adding some weight going forward (and to be fair, he did look noticeably bigger in Summer League this year). He got easily thrown around in the post last year and would often have to foul to bail himself out. This won’t be a huge issue if he continues to just defend the guard and small forward positions, but if Brown ever wants to go small-ball and utilize Thompson as a stretch four, he’ll need to be able to handle bigger players.

This will depend on a few factors. Players who shoot 40% from 3 and try hard on defense will always have a job in this league, but the question is if Thompson can continue to shoot at the rate that he did last season. While his 167 attempts from last year is a relatively large sample size to work with, Nylon Calculus posted a study last month showing that we usually don’t really know how good shooters are until their 750th attempt. While I think Thompson’s 3-point percentage will level out more closely to his rate from last season than the 28.8% rate he shot in the D-League in 2013, I also wouldn’t be surprised if last season was just an outlier.

And if he turns out just to be a league-average shooter and his defense never improves, he’ll probably never be anything more than a 12th man for most teams. But if he truly is the shooter that we saw last season and is able to reach his defensive potential, he’ll play a big role on this team going forward. It’ll take time, but considering that Philadelphia can keep him through 2017 while paying him basically nothing,[1] he’ll get plenty of chances to prove what he can do.

But if this turns out to be Thompsons’s only NBA contract, at least we'll always have this video of fantastic Hollis highlights I threw together playing to "Turn Down For What.":[2]

[1] He’s set to make $2.8 million total over the next three seasons with each year fully unguaranteed, according to Sham Sports.

[2] I may or may not have spent 30 minutes on a Friday night putting this video together. Yes, I know, I should get a life.