This is not going to be a long thinkpiece about the perils of social media, nor will it be about what an impish, despicable shitfuck of an organization the NFL is, sadly.

A guy said something stupid on the internet. It's news to us because it's our guy. Joel Embiid -- whose Twitter presence was near unmatched prior to yesterday -- tweeted the following in reference to the video of Ray Rice punching Janay Palmer in the face in a casino elevator in Atlantic City: 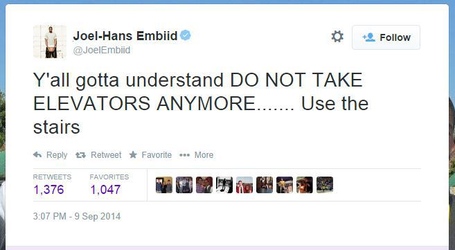 I find this shitty in the same way I would if one of my friends said it. Embiid should know better, as everyone should. This isn't a Big Deal, it's just disappointing and somewhat expected. He's a kid with recent celebrity and nothing to do but rehab and try to be funnier on the internet than he really is. The fact that he doesn't have a full grasp of the English language isn't an excuse.

Athletes are not role models. Athletes can be role models if they choose to be, but they don't automatically become de facto role models as soon as they get handed a jersey and a paycheck.

This was dumb, insensitive, and not really even in the sphere of funny. Either the Sixers or Twitter's long arm of outraged self-righteousness got to him and Joel deleted the tweet. But not before the always unfortunate "quit being sensitive" line was delivered.

He'll learn from this. He won't do it again. Or he might. That would be shitty. We hope our athletes are good people, we project values onto them, we ask them not to disappoint our user-created standards.

This tweet doesn't make him a bad guy -- it makes him a dumb 20-year-old with time on his hands and a major outlet through which he can present himself to be an asshole. In a vacuum, this is negligible. In America, in male-dominated sports, the mistreatment and blatant lack of respect for women gives this bad joke of a tweet the potential to exacerbate.

I don't think he can be condemned or excused either way. Hopefully this is a lesson to him and others.