Dario Saric: Three Things to Watch at the World Cup

As the tournament gets underway in Spain, here are a few things to focus on while watching the recent Sixers draft pick.

Share All sharing options for: Dario Saric: Three Things to Watch at the World Cup

While most of America will wake up in anticipation of college football's first full Saturday tomorrow morning, the FIBA Basketball World Cup will be getting underway in Spain. The NBA hasn't quite reached the 365-day-a-year status only enjoyed by the NFL, but it's creeping closer.

No current Sixers will play in the World Cup, but three players whose rights are held by the organization will participate: Arsalan Kazemi (Iran), Dario Saric (Croatia), and Furkan Aldemir (Turkey). Of the three, Saric is the player that will hold most of the whole front office's attention.

The 12th overall pick in June's draft, Saric will most likely start at the four for a Croatian team that should at least advance to the Round of 16. In his team's final tune-up for the tournament against Lithuania, Saric was impressive. He scored 16 points on 7-9 shooting, dished out four assists to only two turnovers, and was a plus-26 in 21 minutes of action. Croatia won 94-80, in case you were wondering.

The obvious caveats apply here. It was only one game, and an international exhibition game at that. What I do believe can be gleaned from the game, though, are a few things to keep an eye on as the games start to count. Here are three:

1. Saric as the release valve. The 6-foot-10 forward isn't the prototypical international stretch four. While Saric has nice form and is developing a consistent three-point shot (2-4 against Lithuania), he's a pretty complete offensive player. He can post-up, put the ball on the floor, and his best skill at this point is probably his passing.

In the exhibition game, Croatia utilized Saric's all-around skillset by having him serve as the "release valve" in the pick-and-roll. In the first shot below, the Croatian point guard dribbles away from Saric and towards the team's center for a pick-and-roll out of a "horns" set. In the second shot, you can see that Lithuania's center (Jonas Valanciunas) shows fairly aggressively. As a response, the Croatian center dives to the rim and needs to be cut off by a help defender. 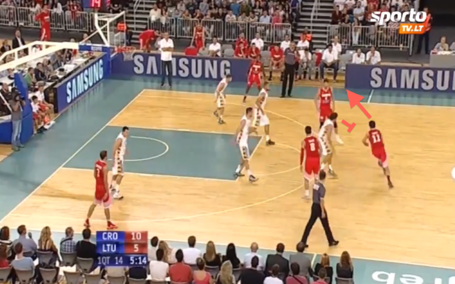 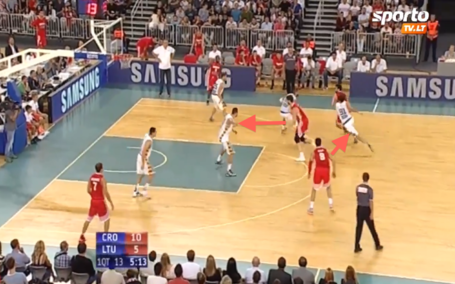 That help defender is Saric's man. After the point guard passes the ball to him at the top of the key, the offense is in Saric's hands. Whether it's attack the rim, swing the ball to the opposite corner, throw a bullet pass to the center (as he does on this play), or shoot a three (as he does in the second video), the decision has to be quick. 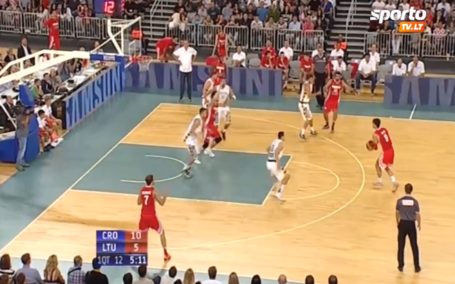 This is a fairly simple action that can be defended a few different ways. If teams rely on this specific coverage against Croatia, they're going to be at Saric's mercy. It will be interesting to see if he forces them to adjust.

2. Who does Saric guard? As his plus-minus showed, Croatia defended well as a team when Saric was on the floor. Throughout the game, he seemed to understand the defensive rotations and communicate well with his teammates.

The one negative from the Lithuania game was that Saric picked up four fouls in a little over 20 minutes. This is somewhat to be expected, as the Lithuanians have an NBA frontline in Valunciunas and Rockets forward Donatas Motiejunas. While Motiejunas (who Saric was mostly defending) had a fairly quiet game, he put Saric's major weakness on display in the third quarter a couple of times.

The word on Saric is that he lacks strength, and look at how far Motiejunas pushed him under the basket on the transition post-up. His lateral quickness can also be a liability, as you see on the drive where he picks up the nickel dimer. Frankly, those two things aren't a great combination.

From what I've read and the little I've observed of him, individual defense seems like Saric's biggest question mark. If Croatia advances to the knockout round, formidable frontcourts will be waiting for him.

3. Saric's mental game. This is meant in a positive manner, because Saric feels like the type of competitor who can consistently get under opponents' skin. The effort that he plays with reminds me a little bit of Joakim Noah. Saric runs the floor hard, dives into the stands for loose balls, etc.

"Feisty" is an adjective that is going to be used often to describe Saric, which is a nice way of saying he's a pain in the ass to play against. Maybe it's the 80's-movie villain haircut, but even the manner in which Saric argues about every single call seems pretty authentic. Saric's complaints are much more Allen Iverson than Evan Turner or Michael Carter-Williams.

Regardless, basketball is more fun when there is added conflict between the two teams. Saric has the potential to cause a lot of conflict.