The Sixers have two talented young bigs, but we're not sure either of them can shoot. We're also not sure if it matters or not.

Share All sharing options for: Nerlens Week: Noel, Embiid, and the Spacing Question

Ed. Note: In the second theme week of the summer, we will feature a daily post on our favorite flattopped rookie, Nerlens Noel. Leading off, Rich discusses whether or not the Joel-Noel combination can work. Be prepared for more flattops as the week progresses. - Sean

Last week, I had the pleasure of reading Nick Hornby's Fever Pitch, which is an account of the author's two decade-long obsession with Arsenal F.C. One of my major takeaways was how Hornby's almost religious fanaticism made the manner in which I follow sports seem pretty tame in comparison.

Still, similar to most people that frequent this site, I think about the Sixers much more than the average Philadelphian, and truly, more than the average Sixers fan. Sure, there are plenty of diehards beyond LB‘s reach, but a certain level of commitment/disease is required to speculate about a hypothetical Jeremy Lin salary dump in the comments section on a Wednesday afternoon. A lax work environment is also particularly useful for such endeavors.

Considering how far along the Sixers are in The Great Rebuild (HINT: we got a ways to go), these thoughts naturally drift toward the future. Specifically, on the team's most recent top draft picks, and the frontcourt tandem they could possibly form down the road. Noel and Embiid. Nerlens and JoJo. 4 and 11. And I'm far from alone.

Question of the Day: "Do you think you and @joelembiid can be the next Olajuwon and Sampson?" LOL these kids are amazing.

The idea of a Twin Towers redux is tantalizing, mainly because rim protection is at a premium in today's NBA. It's easy to salivate over the potential of going to war in a playoff series with two elite shot blockers working in unison, emphatically ensuring that all opposing drivers SHALL NOT PASS (or, in this case, score).

That is, if the partnership even materializes at all. Taking their injury histories into account, the range of career outcomes is pretty wide for Nerlens Noel and Joel Embiid separately, much less collectively. They both could be really good, or hardly anything. This is the uncertainty of the road less traveled that Sam Hinkie has led all of us down.

Beyond the obvious health questions, basketball is a free-flowing game and how effectively two teammates function together is determined by countless variables. Basically, we just don't know yet, and probably won't make any meaningful headway until 2015-16. If this were franchise mode in Madden or 2K, the upcoming season would already have been simulated.

We can sure as hell talk about the two of them, though. In separate posts spanning the next few weeks, I'll list some of my general thoughts regarding the pairing at this point in time: concerns, hopes, issues, potential solutions to those issues, etc. In honor of training camp and Chip Kelly, we'll start on offense.

When mulling the offensive potential a Noel-Embiid frontcourt, there is one major concern that looms large over everything else: How can the Sixers effectively space the floor with two big men that don't shoot jumpers? Entering the league, that's exactly what they represent: Embiid's 1-for-5 performance from behind the arc last year - Those rims ain't loyal (*ducks*) - comprises all of the duo's three-point attempts in college. They weren't exactly hoisting a ton of two-point jumpers, either.

As Zach Lowe pointed out last week, modern defenses eat alive teams that can't space the floor. Getting to the basket becomes a chore when driving lanes are clogged and the paint is packed with extra help defenders. It's the equivalent of letting your opponent start a game of Monopoly with hotels sitting on both Park Place and Boardwalk.

A bonafide floor spacer up front clearly helps an offense, but similar to most things in life, there are exceptions. Take a gander at the chart below. It lists the top ten offenses* from last season, those teams' most utilized frontcourt combo (some subjectivity was involved here), and the amount of threes those two players took on average every 100 possessions**.

*Ten, because generally speaking, a top-ten offense combined with a top-ten defense places a team in serious championship contention.

**100, because offensive rating (first column) is the number of points scored per 100 possessions by a team. All stats are courtesy of NBA.com.

Try to think of the chart as more of a general guide than definitive reference point. Those numbers don't account for the spacing LaMarcus "Long Two" Aldridge provides with his jump shooting (a whopping 12.8 mid-range shots per game, on which he shoots 42%). They also don't include how the teams' offenses fared when the frontcourt played in relation to their overall efficiency*. Personally, I think the mini-exercise simply serves as a reminder that while shooting is undoubtedly important and helpful, good offenses can come in different shapes and sizes.

*For reference, the Clippers, Heat (duh, LeBron and Bosh), Blazers, Rockets, and Wolves (Kevin Love, y'all) were all better offensively with those specific frontcourt pairings on the floor. The Spurs, Suns, and Raptors had virtually identical numbers. The Mavs (Sammy D!), and especially the Thunder were worse.

Dirk Nowitzki, Kevin Love, and Chris Bosh are examples of the few superstars that double as stretch fours. However, even after removing Oklahoma City from serious consideration - Kendrick Perkins is essentially a trust fund baby mooching off the Durant-Westbrook-Ibaka trio - three of the top-ten offenses give heavy minutes to guys that don't shoot threes together up front. It can be done.

On a macro level, strict comparisons to non-shooting success stories like the Clippers and Raptors (How are they replicating Blake's athleticism? MCW can't shoot like Lowry!) are beside the point. They're comparable to the tired arguments over the Sixers "needing" X, Y, and Z to win a title because that's how the Spurs, or Celtics, or Heat were assembled. 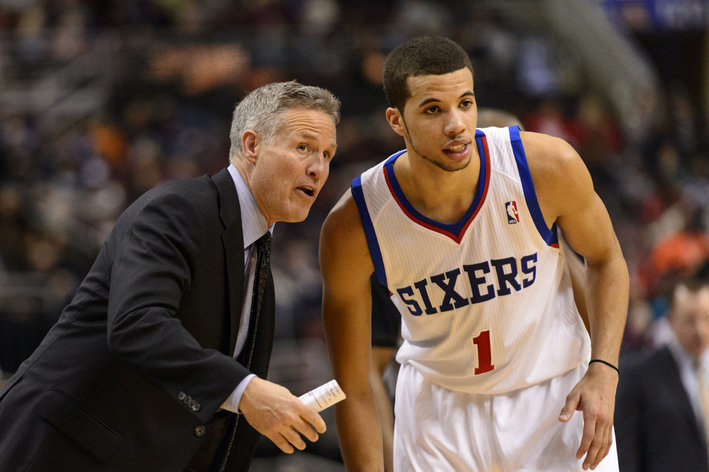 It's important to keep in mind that if this whole thing does in fact end up going right, it will mostly be due to Hinkie choosing to be different than the rest of the pack. Case in point: When everyone else is valuing shooting at an all-time high, the Sixers are betting on sheer talent in the form of non-shooters winning out.

This is where Embiid and his amazing Twitter feed come into play. As much as I enjoy delving into X's and O's and other minutiae, the presence of a superstar renders those things (spacing, for one) much less important. At the moment, Embiid represents the Sixers' best hope of developing one.

In many ways, Embiid was still figuring out how to play basketball last year, which made his effectiveness all the more impressive. The drop steps, jump hooks, and up-and-unders are things that relative newcomers flat-out don't pick up so quickly. Talent like that is a dangerous thing; talent like that is convincing enough to make a person dream of a time when he's not a relative newcomer.

Look at the Clippers, who sported the league's top offense last season. Even though employing the world's best point guard certainly helps things quite a bit, they play two non-shooters heavy minutes together in the frontcourt. And it doesn't matter because one of those two players is a superstar that possesses the ability to force opposing defenses out of their comfort zone. If Embiid ever reaches Blake Griffin's level and is demanding a double team on every trip down the floor, any spacing issues with Noel will take care of themselves. And hey, maybe Rihanna will start paying more attention to him.

While three-point range isn't in his arsenal, Embiid did actually show small flashes of a midrange game at Kansas. According to Draft Express, he shot 7 of 11 on jumpers and displayed an "intriguing touch." Embiid's shooting form is solid, although anecdotally I do remember a couple of hilariously bad misses and having the sneaking suspicion that he constantly yells "Kobe!" upon releasing the ball. Every little bit helps, though, and even a semi-reliable 15-footer for Embiid would go a long way toward making a partnership with Noel work.

The same goes for Nerlens, even though I'm more skeptical of his jumper, strong summer league foul-shooting performance aside. It will be interesting to see if Brett Brown can use Noel, a surprisingly deft playmaker, to create even a fraction of the precise ball and player movement that has come to define the coach's wildly successful former team. Again, every little bit counts.

While Noel's offensive polish will never match the quality of his defensive instincts, he can somewhat make up for the lack of shooting by mastering some of offense's subtler aspects. Setting solid screens, rolling hard to the rim, and moving the ball quickly from side-to-side are three areas I suggest he'd start with. Hopefully, his conditioning has improved from the "Early 2000's Shaq at Training Camp" levels we saw at summer league.

Small-ball lineups tend to perform better than more traditional ones offensively, and even if the Noel-Embiid pairing proves successful, they can't play together for 48 minutes. When the duo is on the court together, all they have to do is find a way to consistently outscore their opponents, which is possible even if Embiid isn't a star and Noel never develops a jumper.

That's because I'm not sure many opponents will score on them at the other end.