The Sixers have signed guard Pierre Jackson to a one-year contract, according to Mark Deeks of ShamSports.com. Pappy Jack is here to stay.

Pierre Jackson's 76ers debut ended with a catastrophic Achilles injury at Orlando Summer League, but it appears as if the team is not shying away from investing in him. According to salary cap expert Mark Deeks of ShamSports.com, the Sixers have signed Jackson to a one-year deal.

It's mostly guaranteed so I doubt it. RT @PistonPowered He accept required tender?

Before everyone gets to joking about the Sixers bringing another injured player into the fold, Deeks notes that this was a move that had to be made if the franchise wanted to keep his draft rights. Jackson was impressive in his minuscule stretch of time in front of the Sixers coaching staff, living up to his reputation as a born scorer. The Sixers were devoid of players who could flat out get buckets last season, making Jackson a perfect fit off the bench. Assuming he's able to come back in mostly the same shape, locking Jackson up now was a solid, if unspectacular move.

The real story here, often undervalued in team-building talks, is the treatment of Jackson by Sixers management despite him being of no immediate use to the on-court product. Jake Fischer previously reported that the team was going to step up and pay for his rehab following the Achilles injury, but giving him a mostly-guaranteed contract while he's on the sidelines is a classy move that is sure to be recognized by players and their representatives alike. When Jackson is able to make his return to the court, there's no doubt he'll remember that he was taken care of in Philadelphia.

This is a stark contrast to the situation that has unfolded in Houston in recent weeks, where Rockets GM Daryl Morey has come under heavy fire for heavy-handed treatment of players as "assets". Perhaps learning from the missteps of his mentor, Sam Hinkie has stepped up to the plate to treat Jackson as a valued member of the organization. It's a small gesture for a team with boundless cap space, but a gesture nonetheless.

For a team that is looking to build something from the ground up, establishing a strong reputation with their players is an important step toward becoming an attractive destination down the line. Building goodwill will serve the Sixers well into the future, and as with most of their actions these days, that's what this is all about.

UPDATE: Exact salary figures have been made available, courtesy of Derek Bodner and Deeks. 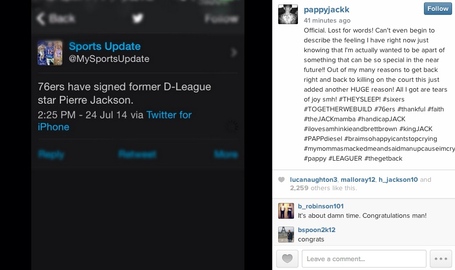