The Most Important Addition To Michael Carter Williams' Game

Why the floater is a must add for Michael Carter-Williams.

Share All sharing options for: The Most Important Addition To Michael Carter Williams' Game

Say what you will about Michael Carter-Williams rookie season: that he was overachieving, or a stat chaser, or a point guard who had already reached the peak of his value and should be moved. Spin it any way, it's hard to say he didn't exceed expectations, especially when you factor in the fact he was the 11th pick in a poor draft class and proceeded to play the last 3+ months of the season with a torn labrum in his shoulder.

That's not to say he's without flaws, some of which are glaring. His jumper is inconsistent (although his form is solid), he turns the ball over a lot, and his pick and roll defense leaves much to be desired. And while those problems will continue to limit his efficiency if not improved upon, the biggest addition Carter-Williams must make to his game in his sophomore season is adding a floater.

The floater has been a staple of most point guards games, typically because they're undersized in relativity to their defenders. If you're 6'1 driving to the basket and a 6'10 defender steps in front, you're at a disadvantage. That's why smaller ball handlers like Tony Parker and Chris Paul have essentially perfected the running/teardrop floater, to be able to still attack the lane but be able to lay the ball over the reach of larger defenders.

Michael Carter-Williams is 6' 6"  with an 8' 5" standing reach, so scoring around the rim shouldn't be as hard for him as it is for guys of Parker and Paul's size. The shot charts say otherwise.

There's a ton of blue everywhere -- enough to say he blue himself -- most notably around the rim, the place where Carter-Williams is deemed most effective. The chart shows he's basically mediocre there. Drives to the basket are the most crucial part of his game, averaging nearly six points a game in those situations. However, there's a reason he's only shooting 37.8% when he attacks. His issues typically seem to deal with his stem from his inability to utilize his length well. He's got a strong tendency to jump straight up into larger defenders, rather than use his range to contort around defenders. Watch here as MCW tries to go over the top on Mirza Teletovic, who happens to be 6'9.

On this play, Spencer Hawes sets a pick on Deron Williams, causing Reggie Evans to switch onto Carter-Williams. MCW easily beats Evans around the corner, and in the frame you can see Mirza rotating over from the weak side to protect the rim. He knows Teletovic is there and has two options: use his long arms to float the ball over the defender, or try and attack him straight on. 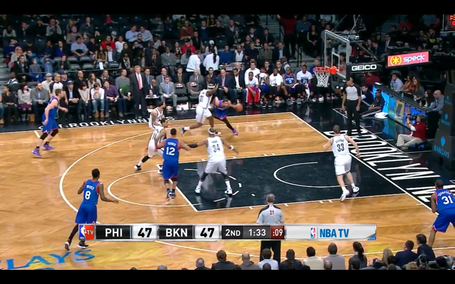 Teletovic leaves plenty of space between himself and the ball handler which would have made it easy for Carter-Williams to attempt a running floater. 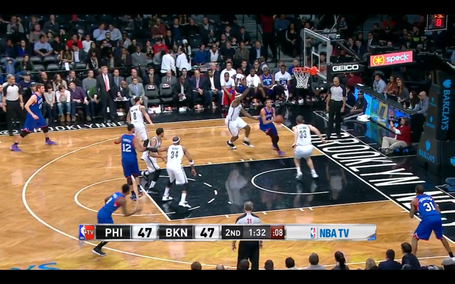 Instead, he tries to finish with a finger roll, and Teletovic promptly takes his shot and deposits it in the trillion dollar laps of Jay-Z and Beyonce on the sidelines.

In respect to other point guards, he may have a height advantage, but the Nets forward still has three inches on him. If MCW extends his arm above his shoulder and tries to drop it in, nobody, or in this case Teletovic, will have a remote chance of blocking it. However, in this case (and most) he turns his wrists over, starting his shot at a much lower point and making it much easier for rim protectors to swat it away.

With his jumper still in developmental stages, he's not really a threat to do any damage consistently other than around the basket. Because of that, teams have no problem with him getting into the middle of the lane because his inability to shoot over larger defenders renders him ineffective. Teams have positioned themselves accordingly.

Check out the defense from Chicago here, as Carter-Williams is able to get past Derrick Rose. Joakim Noah, Carlos Boozer are giving him all the space he needs to operate in the painted area. The message is simple: beat us over the top. 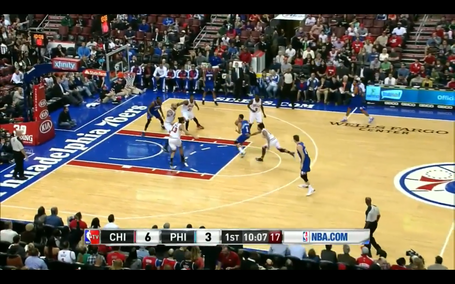 Carter-Williams goes for the floater in this instance but leaves it short, and Chicago snatches up the rebound. It's been a common trend for teams to defend him like that, and if he plans on having a successful career he's going to need to make them pay.

Being able to add that component to his game does a couple things for both him and the team. It forces the rim protector to step up to prevent a possible floater, allowing the typically quicker Carter-Williams the ability to get around him and to the cup. It'll also begin to attract the attention of wing defenders, which gives MCW the option to lay it off to a teammate on a backdoor cut. Even though he hasn't been a large threat to knock down the teardrop, you can see Jimmy Butler creep into the picture on the left side and away from his assignment of James Anderson.

The floater isn't necessarily a shot that can be improved overnight -- it takes time to figure out the right combination of arc and arm strength to get it. Time is now for MCW to get that repetition than in game situations.

A consistent floater would go a long way in making him an even tougher cover for NBA defenses.