Sam Amico of Fox Sports reports that the Sixers have a strong interest in Cleveland Cavaliers guard Dion Waiters.

Sam Amico of Fox Sports has reported that the Sixers are interested in acquiring guard Dion Waiters from the Cavaliers.

The relevant part from the article:

"there are league-wide whispers of a third team perhaps getting involved in a potential Cavs-Wolves deal, whispers of the 76ers possessing a strong interest in Cavs guard Dion Waiters"

Jerry Zgoda then interpreted that as the Sixers being hot after Waiters.

This is not the first time that Waiters and the Sixers have been linked to one another, as there was speculation about a possible swap of Waiters for Evan Turner back when the alleged Waiters-Kyrie Irving altercation happened.

Waiters averaged 15.9 points per game last season, although with a below average PER (14.0), Win Shares (0.037/48 minutes) and efficiency (50.8% true shooting percentage).  The one area that he showed some promise in was his improvement as a shooter, as he hit 36.8% of his 3.6 three point attempts per game, up from 31% during his rookie season.  He also tends to take more midrange jump shots than I would imagine Sam Hinkie would prefer, as shots between 16' and the three point line made up 29.2% of his attempts.  Only two regulars on the Sixers attempted over 20% of their shots from this area of the court last year: Lavoy Allen (27.1%) and Evan Turner (19.4%). 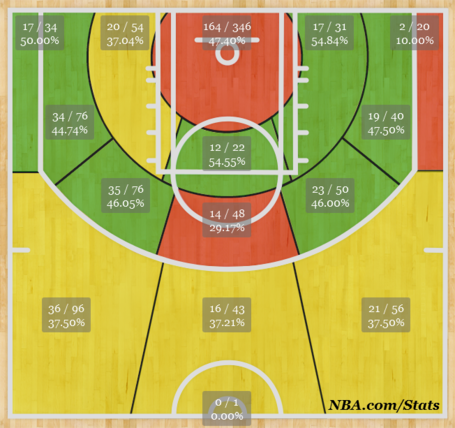 The shot selection, combined with his struggles finishing at the hoop (47.4% per image above), his struggles defensively (110 defensive rating, 0.921 points/possession against), his low steal rate (1.6%), his lack of positional versatility, and his character concerns make me question whether the Sixers are actually "hot after" Dion Waiters.  However, the Sixers, with their ample cap room, are likely to be linked to virtually every Cavaliers rumor until the Kevin Love trade is resolved.

Sporting News is reporting that the Sixers are interested in being a 3rd team in a Kevin Love trade.

Sources told Sporting News that Philadelphia and Denver, again, are interested in participating in whatever deal happens for Love. Denver has interest in acquiring Love themselves, while the Sixers would like to facilitate a trade by including forward Thaddeus Young.