The Sixers are Champions of the 2014 Orlando Summer League.

The Sixers are 2014 World Champions

(of the Orlando Summer League). 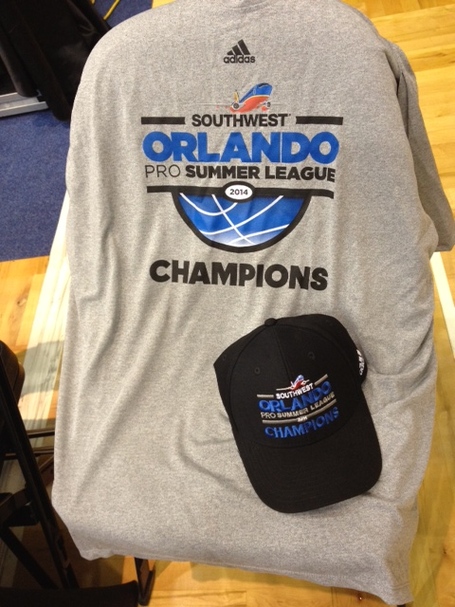 Sam Hinkie and the Philadelphia 76ers have worked tirelessly to bring Philadelphia its first championship since 2008, culminating in their domination of the Memphis Grizzlies Summer League team.

The day started off with some bad news, as Nerlens Noel (rest) and K.J. McDaniels (sprained ankle) would miss the game, leaving the Sixers with only 8 active players.  However, the Sixers championship march would not be slowed down.  The effort was led by Hollis Thompson, who scored 21 points (on 8-15 shooting, 3-8 from three), 6 rebounds, 3 assists and 3 steals, including a 4 point play and a thunderous driving dunk.  After a rough first game where Thompson shot 2-12 from the field, he finished the lat 4 games shooting 21-48, scoring 61 points on those 48 field goal attempts.

Casper Ware continued to provide points, with his 19 points coming on 7-19 shooting, including 4-13 from three point range.  Again, I'd normally get on Ware more, but there were very few options creating from the perimeter on this team.

Travis Bader had by far his best game of the tournament, as he was able to find space off the ball to get up shots.  He hit 4 of 9 three point shots on his way to 16 points.

And Ronald Roberts Jr continued to be a consistent force down low, scoring 12 points to go along with his 11 rebounds, 1 steal and 1 block.

Virtually everybody on the team contributed.  Jerami Grant continued to play better, with 8 points and 2 blocked shots, and JaKarr Sampson provided 13 points, 4 rebounds, and 2 steals.

Whether or not any of these will get invited to training camp remains to be seen.  Ronald Roberts Jr. seems like the most likely, but he will be on his way to Vegas to play with the Miami Heat, and if he puts up another good showing there the Sixers are unlikely to be the only team interested in his services.  Sampson also showed some promise, and could earn an invite to camp.

The Las Vegas Summer League starts today, with the Sixers first game tomorrow night at 10:30 against the Jazz.  Comcast will air two Vegas games, the one at 8 pm Monday against the Cavaliers as well as the Tuesday game at 8 pm against the Suns.  Both of the games will be on TCN in the Philadelphia area, and NBA TV elsewhere.

Before I go, I have to leave you with this:

Where are you going next? @Drake