Both the New Orleans Pelicans and Detroit Pistons were one ping pong ball away from winning the rights to the first overall pick in the 2014 NBA Draft. Instead, both teams lost their first round selection altogether.

These two teams were not the only franchises that just missed out on the first choice of Andrew Wiggins, Joel Embiid, or Jabari Parker, as 12 of the 13 non-winning lottery teams all came similarly close to coming away with the top pick in this year's draft. Only the New York Knicks, who still would have sent their selection to the Denver Nuggets had they won, needed changes to more than one lottery ball number to win.

Read that again: Every team in the lottery, except one, came one ping pong ball away from winning the first pick.

How did this scenario come up? During the lottery drawing the Cleveland Cavaliers won the first pick with the combination [13,7,9,14]. Since order does not matter, this combination will be referred to as [7,9,13,14]. 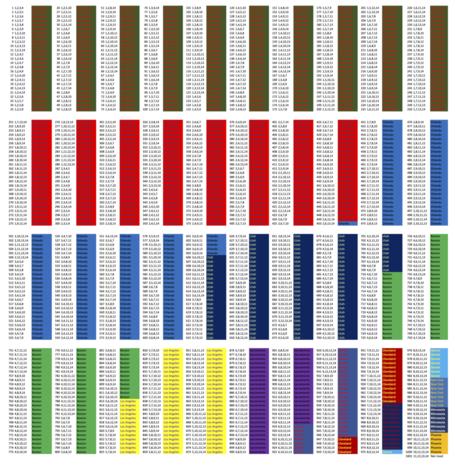 After comparing each of the 1,000 possible combinations to the one that awarded Cleveland the first pick, every team except the Knicks had at least one near miss. Five teams, the Orlando Magic, Utah Jazz, Boston Celtics, Los Angeles Lakers, and Detroit Pistons were one ball away with four different combinations. Unsurprisingly since they won the lottery, the Cavaliers were the team with the most near misses with seven.

Take a look below at how close each of the teams were. The bolded, italicized, and underlined number in the group is the incorrect one. 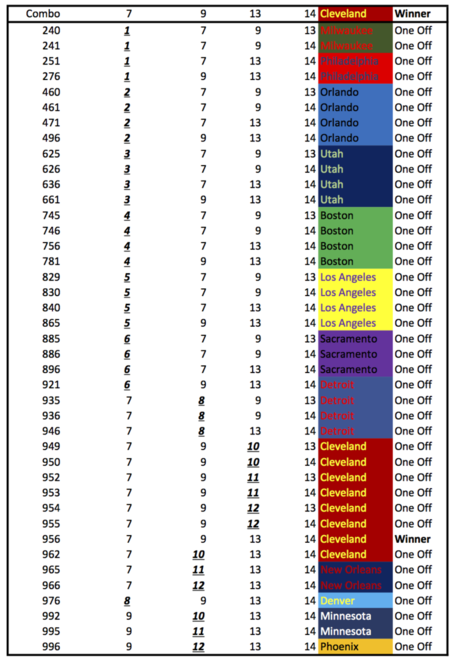 The key to this scenario is the selection of the lottery balls numbered 13 and 14. Every team in the lottery owns the rights to at least one combination with those two numbers, so the other two balls selected determined the winner. Compare that to other pairs, such as 1 and 2, where if those two numbers are picked it guarantees a win for Milwaukee no matter what other two numbered balls get chosen.

Unfortunately for Milwaukee, this was not the case, and instead it will be Cleveland on the clock at the Barclays Center when the NBA Draft starts on June 26th.