Throughout this week, the Liberty Ballers staff will be going deep into the team's Top 10 Things That Happened, for the lack of a better term, from the 2013-14 season. Right now, let's appreciate all that is Nerlens Noel and what he represents.

In a season filled with near historic notoriety, shoe explosions, and finger guns, it's hard to find some reassurance in regards to the team moving forward. Michael Carter-Williams was a pleasant surprise and one of the few bright spots of a talent deprived team. The 2014 trade deadline, in all its excitement, cleared out most of the previous regimes players and memories, fueling the proper rebuild this franchise has lacked.

But GM Sam Hinkie's plan was put into motion far before that trade deadline. Flashback to the 2013 NBA draft, Hinkie dropped a franchise altering bomb, moving Jrue Holiday, then an All-Star Point Guard, for Nerlens Noel and a protected 2014 first round pick. "Together We Build", the organizational mantra, was never truer from the moment of that trade and the first tip off (despite how awesome the season began).

But this isn't a history lesson on the 2013-2014 Philadelphia 76ers season. No, that is well-documented, heavily criticized, and aesthetically unpleasing to the eye (for the most part). Rather, let's quickly wax some poetry on a player who both is a building block to the current roster and symbolically a shift in thinking or a change in era for the organization, as a whole.

The High-Top Fade or the "urban flattop"... It's a hair style that was iconic in the late 80s-early 90s especially in the hip hop/rap/urban scene and popularized in its presentation in many music videos. Kid N Play, Doug E. Fresh, and Eric B & Rakim all had a part in bringing the style to the mainstream and even globally.

While it went out of fashion in the early 90s, it still pops up now and then, especially in basketball. In recent history, Brandon Jennings and Iman Shumpert were known to have rocked the style but have since given it up. Presently, it's emblematic to Nerlens Noel as the unibrow is to his fellow Kentucky alum, Anthony Davis. In a completely unbiased opinion, if I had to rank people with that hairstyle, it'd go:

Ironic that after spending a season prior wishing an injured center who sported a goofy hairdo would go away, I'm only excited and can't wait until Noel comes back. Frankly, I haven't been this optimistic in a long time regarding the Sixers organization. Maybe it was the years of mediocrity and a "band-aid" approach to filling holes on perennial 8th seed (It definitely was), but the trade that brought in Noel represented a change of guard (Granted, the prior season's trade gamble was a spark).

In this way, Nerlens Noel personifies "Hope", even before he's touched the court. There's a clear direction and Noel, along with Michael Carter-Williams, begin to form the base of a team that aspires to compete for a championship in the future. Not surprisingly, in his introductory press conference, Nerlens echoed the sentiment that fans hope is right when referring to the Sixers GM Sam Hinkie and their future.

"Sam's just a genius. How could you think of something like that," said Noel in reference to the pairing of him and Michael Carter-Williams, former AAU teammates. "To have two players that played AAU together, already have a great relationship, I mean from point guard and big man, you've got to put a lot of thinking into that. I mean, a lot of credit goes to him for building that as a foundation going into the future"

"Future", it's what we're all looking towards and where we believe there will be success. Just like in any bad situation or even after bad day, we wish that "tomorrow" will be better. If the last decade has taught me anything as a fan, it's that probability does not work in the favor of any team. Moreover, when your team treads and doesn't try to adapt to the league's evolution, that probability gets even lower.

The idea of Nerlens Noel (him and his trade) is the exact opposite of this all. It's identifying that the process hasn't been working and that there needed to be a change. Even if any young player doesn't provide the impact that we all expect, all is not lost.  The healthy amount of room under the salary cap and infusion of talent allows for a wider margin of error, especially for a rebuilding team. Contrasting this with the visible ceilings of the teams in recent years, despite possible failure, unlike those teams, this one isn't hamstrung for years to come. That is hope.

Tangibly, after years of lacking a true shot blocker, the Sixers may have found an answer. With a 6'10 frame and a wingspan of 7'4,  the young athletic center has the potential to be a defensive force. Pairing him with the 2014 draft picks, MCW and possibly Thad Young could create one of the more athletic teams in the league.

But Coach Brett Brown, has stated from the onset of the season that they needed to more or less completely rebuild Noel as a player.While the raw athletic talent and potential is there, Brown has been working with Noel all year to build a better player doing things like completely rebuilding his jump shot. To be fair, after sitting out and recovering for a year, it's hard to know what kind of condition he was in.

And then, thanks to Keith Pompey, we caught a glimpse of what Nerlens can do... (Warning: Object appears even more awesome with every subsequent view).

Here's a still frame provided thanks to our own Brandon Lee Gowton back in February. 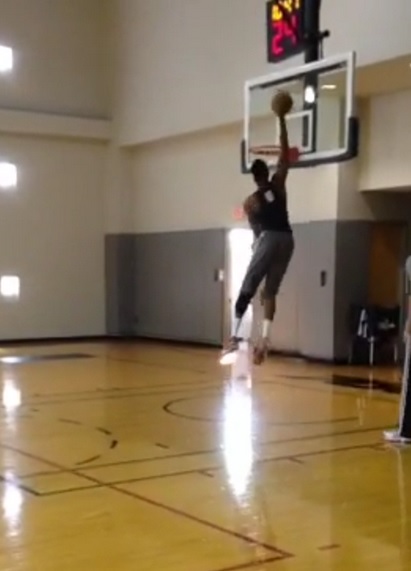 Whole arm below elbow above rim? Yes. Absolutely Ridiculous? Yes. I'll leave to your imagination what that will look like on the court on offense (OOPs for Days!). However, just think of what having an athletic weak side defender will do for a defense that struggled off the pick and roll as much as the Sixers have for what seems like a century. Furthermore, he even teased a date at a possible debut:

For a team that was tail-spinning in the standings (yet still not the worst in the league, thanks Milwaukee), THIS was, again, something to look forward to. Although, nothing came of it as Noel sat out for the rest of the season, the excitement is palpable folks. It remains to be seen how Noel will perform on the court but one figures that we'll get a first look this summer.

Armed with great player development coaches (and an organization that has and will take great care with him), there should be less doubt that Noel will become a good NBA player. In addition, with the direction the team is headed in, believing and trusting that this team will succeed begins to feel more real by the day.