As he displayed down the stretch in Boston on Friday, Michael Carter-Williams has played with greater confidence and more offensive swagger during the home stretch of his first NBA season.

Michael Carter-Williams should probably be Rookie of the Year. More on that in a second.

As Derek Bodner noted this week, in this growing age of analytics, the next step in truly utilizing the basketball information and statistics now available to us is combining that knowledge with what our eyes tell us, throwing all those ingredients into a blender and mixing them into easily digestible smoothie of analysis.

This is a multi-faceted process. For one, the best-case scenario of basketball analysis is when an observation we make is then echoed by statistics. For example, it looks like the Sixers' offense flows better when Henry Sims is on the court. We check basketball-reference.com, and see that Sims leads the team with an offensive rating of 114. It matches up. Sweet.

But what happens when our visual assessments don't match up with the stats?

Back to MCW. He earned Eastern Conference Rookie of the Month honors last week, despite the point guard's numbers being down in most areas across the board since the All-Star break. MCW's regressed in points, assists, blocks, steals, all three shooting percentages, both offensive and defensive ratings, free throw attempts and plus-minus. His biggest dropoff comes from behind the arc, where he shot 29.1% from deep before the All-Star break and just 17.7% since.

MCW has seen a dramatic increase in his rebounding though, catapulting himself from 5.4 rebounds per game to 7.5 following his weekend in New Orleans. Otherwise, the numbers all say he's taken a major step back over the last 5 weeks.

At the same time, our eyes and common sense remind us he lost two scoring options in Evan Turner and Spencer Hawes to deadline deals. And even though he's stuck making plays to get D-Leaguers open looks and entire five-man defensive units can focus solely on just MCW and Thaddeus Young, Carter-Williams has looked more confident than ever on the court, and he seems to be making smarter reads quicker and finishing in the paint better, too.

Against Boston, Carter-Williams rose to the occasion scoring 8-straight fourth-quarter points for the Sixers as the Celtics made one last attempt to claw back into the game.

"I think I'm being more aggressive and trying to keep the defense guessing with my pull-up jump shot and getting to the basket," MCW said after the win.

MCW is now up to 54.7 percent shooting at the rim, only a third of which were assisted. He's getting there on his own, mostly using hesitation and other change of pace dribbles to better utilize his length and drive past defenders.

Here he is slipping backdoor on Phil Pressey, getting the ball a few feet above the elbow and only needing one dribble to finish all the way at the rim. He uses his wingspan to keep the ball above a helping Rajon Rondo and flip it into the basket around a rotating Brandon Bass:

Notice Bass doesn't even attempt challenge MCW. That's likely because the entire Celtics team fell asleep defensively in that game, but that might also be Bass tipping his hat to how MCW's length can be so dangerous around the rim. Look at how he gets past Jerryd Bayless. After recognizing Bayless is back-pedaling, Carter-Williams just uses his length alone for a swooping runner:

Carter-Williams has been most affective driving to the basket on that left side of the floor. His shot chart following the team's win over Boston on Friday shows he's far better from both the midrange and 3-10 feet on the left side of the court as opposed to the right. That running floater he's been lethal using over shorter guards is something he's done since college and it's paid dividends as he looks to get his own more since the deadline.

"I'm not sure, I haven't really looked at the numbers," He said with a sheepish grin, seemingly trying to conceal his tendencies before admitting, "I am really comfortable going left." 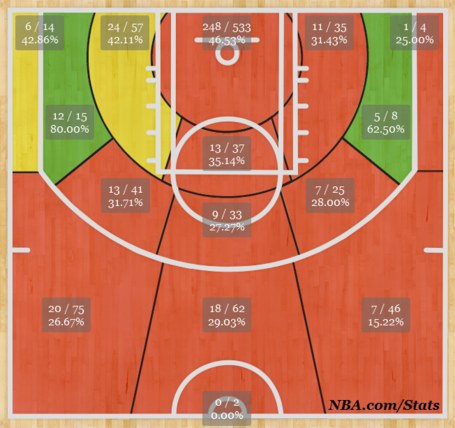 "He's learning where to pick apart defenses and where to take his shots," Thaddeus Young said in Boston. "I think tonight the biggest thing was he took advantage of all the smaller guards that were on him."

"I think he's the Rookie of the Year, I've seen a growth in him on and off the floor," Brett Brown said before Friday night's win. "I'm so proud of what he's done in that regard. He lets me coach him, we have candid conversations. I think that's the holy grail for him: grabbing a city, grabbing a program and being our point guard now and for the future."

Clearly he's got a long way to go in terms of being an efficient scorer at the NBA level, but it's also clear Michael Carter-Williams has the right mindset and physical tools to be a dynamic player on both sides of the ball. And like combining analytics with the eye test, sometimes confidence is all a player needs before he can start using his skill set to be effective on the court.

*All stats for this article were collected before Saturday's game vs. Brooklyn.