Liberty Ballers has written a lot about Andrew Wiggins during the last few months. Now that Kansas' season is over, here's some more.

With apologies to the NIT and various other three-letter acronyms, only four Division 1 college basketball teams are still playing meaningful games. They'll convene at Jerry World this Saturday for a little event that they're dubbing "The Final Four."

Besides Florida, Wisconsin, UConn, and Kentucky, everybody else's season is over in terms of winning a national championship. With that being the case, it's time to start gearing up for the NBA Draft in earnest. So if you have any incisive Spike Albrecht takes, bring them elsewhere.

There are five players generally considered to comprise the draft's top tier, a group from which the Sixers will likely make their first selection if they all decide to skip school. Julius Randle is still playing, Joel Embiid (only officially, according to Woj) and Jabari Parker are still deciding on whether to declare and Dante Exum is Australian*. That only leaves one player for us to review today. Andrew Wiggins.... come on down.

*I love Australians, including Exum. Margot Robbie is Australian, for example. I point his nationality out only because Exum didn't play college hoops, which rules him out for this exercise.

Season in Review: In late January, as the previously unheralded Embiid's draft stock was deservedly reaching Everest levels, announcers would often apologetically throw some sympathy Wiggins' way. They'd say stuff like, "He's had a fine season, too." Or, "He's going to be a good pro, as well."

It was apparent that the Musbergers and Fraschillas of the world felt badly for Wiggins, specifically about the enormous expectations he faced. Their intentions were noble, but the 19-year-old Canadian didn't require the reassurance. Wiggins went through his fair share of growing pains, but this wasn't an Anthony Bennett in Cleveland situation.

In Lieu of Jrue 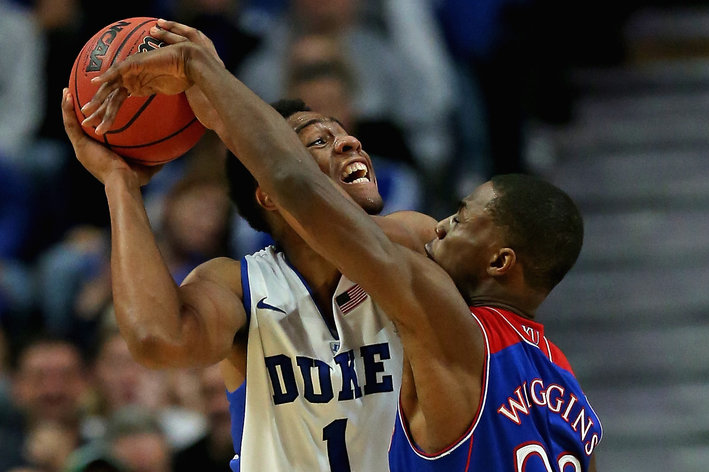 All of LB's Prospect Watch, in one place.

Objectively, Wiggins was one of the best players in the country as a freshman. In no particular order, he earned: Big 12 Freshman of the Year, AP All-American Second Team, and the Kansas freshman single-season scoring record. The LeBron-level hype was obviously too much, but the reality sure didn't suck, either.

As a team, Kansas mostly met expectations before finishing disappointingly. Taking the complete opposite path of the Jim Boeheim cupcake-heavy route and tackling a daunting non-conference schedule with a bunch of freshman and sophomores, they struggled at times. Then, for about two-thirds of conference play, the Jayhawks clicked as Wiggins, Embiid, and Perry Ellis led a balanced offensive attack. They'd end up winning the regular season title fairly easily, Bill Self's 189th in a row.

Kansas' third act was uneven, marked by Embiid's absence due to a stress fracture in his back. With the exception of a poor final performance in the NCAA "third round" (get it together, tourney committee) against Stanford, Wiggins answered the bell individually and successfully shouldered more of the scoring load. However, the Jayhawks relatively struggled as a team without their rim protector.

Strengths: First and foremost, Wiggins is an elite athlete. Not Eli Manning or Joe Flacco ELITE, either. We're talking top-end talent in this regard.

The play that I keep coming back to happened at the end of regulation at Kansas State. With the Jayhawks down two, Wiggins received a dribble handoff on the left wing. Driving right, he took two long dribbles and freed himself for a running flip shot a couple of feet away from the rim. The momentum of the drive took both Wiggins and his defender practically into the first row. When the ball rimmed out, multiple K-State players had first dibs on the rebound, and yet somehow, Wiggins came from out of bounds to tip the ball into the basket. It was only one play, but man, a second jump that quick isn't something you often see on a basketball court (Here it is). 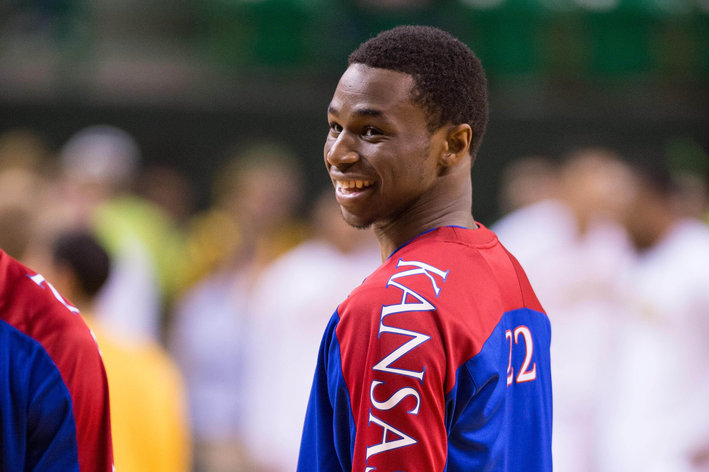 The two areas where Wiggins best leveraged his athleticism in college were on defense and in transition. Long and #blessed with a 7'0" wingspan, he possesses the requisite tools to be a perennial member of the All-Defensive Teams. At Kansas, Wiggins moved his feet well laterally and contested shots in a manner somewhat reminiscent of an in-prime Shane Battier with more explosiveness. At least on one end of the court, his "floor" as a prospect is high. That's a big deal.

Wiggins did a lot of his offensive damage on the break, possessing long sprinter strides most likely passed down from his mother. According to Draft Express, 16.2 percent of his offense came in transition, and he scored 1.3 points per possession on those plays. They weren't all alley-oops, either. He's a strong driver in the open floor.

Weaknesses: Wiggins was generally assessed to have a certain passivity on offense, a criticism that I personally don't place much stock into moving forward. Yes, there were a few times he could've been more assertive as a college freshman, but becoming an NBA superstar will entail much more than "wanting the ball." To reach his full potential, Wiggins needs a ton of skill development.

Currently, I'd summarize his major weakness as "anything that involves putting the ball on the floor in the half-court." That's clearly no small thing. He possesses a below average handle and is mostly a straight-line driver at this point. Like a college student who got away with eating a ton of pizza and drinking a lot of beer, Wiggins needs to diversify his offensive diet if he wants to survive in the pros. Be creative and mix in some greens, Andrew. 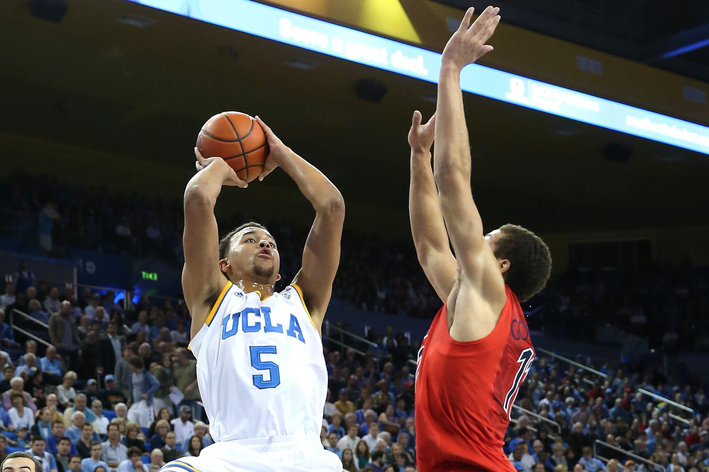 Wiggins is turnover-prone on his drives, mostly due to a current offensive mindset best described as mechanical. Also, remember the play described above where he made the great putback against K-State? Notice how he missed the initial look that he created for himself, not an uncommon occurrence during his brief time in Lawrence. For such a great athlete, Wiggins only shot 63.6 percent around the rim according to Hoop Math. That's not terrible overall, but he definitely struggled finishing in half-court situations. His touch around the basket was average at best.

Stat Stuff: Generally, Wiggins' "translatable" advanced metrics aren't very good. In a recent piece, ESPN's Kevin Pelton wrote, "Wiggins' translated college statistics don't put him in the top 25 percent of NBA-bound wings in any of the nine core skills I evaluate for strengths and weaknesses." (Note: This personally doesn't bother me all that much, but I respect Pelton's work. The more information the merrier)

Group Stats has a lot of really cool lineup data on Kansas. Wiggins played a ton of minutes, and the team was significantly better with him on the floor than they were when he was on the bench, on both ends of the floor. By the way, it seems as if Naadir Tharpe was as harmful to the Jayhawks as it felt while watching him play.

Ken Pom shows Wiggins' TS% (56.3) and ORtg (112.3) are both slightly better than Parker's, though on lower usage. One of the major reasons that the more unrefined Wiggins boosted his efficiency to those levels was his ability to get the foul line. There's definitely a question of how much that will translate to the pros.

Also like Parker, Wiggins' assist-to-turnover ratio was below 1-to-1, which has scared some evaluators. Red flag for both of those guys? I don't particularly think so. In Wiggins' case...

Look at the Tape: I think the shot below is pretty important. 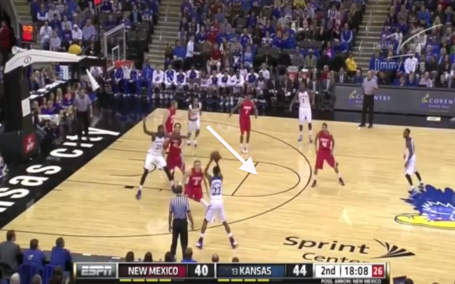 It summarizes what Bill Self largely asked Wiggins to do as a passer: Play inside-out by force-feeding the ball into the post. If that wasn't open, his next read was to hit the other big, flashing to the foul line in hopes of initiating a high-low action. This isn't exactly a scenario where a wing can rack up assists. Even if it didn't register on the box score or look all that cool, Wiggins' size allowed him to be a good entry passer, which I believe partially shows up in the offensive plus/minus.

Wiggins still absolutely needs to work on and improve his floor game. He needs to improve it a lot, even. But I do believe that something like his assist rate was negatively influenced by Kansas' system. That doesn't mean the school was the wrong choice or Bill Self is a bad coach, but schematically, Kansas largely plays through their frontcourt.

In the same vein, getting to the hole was tough sledding for Wiggins partially because the Jayhawks almost always played two traditional bigs. Also, Kansas didn't have much legitimate outside shooting outside of the sparingly used Conner Frankamp, so that didn't help matters with their spacing. Wiggins needs to improve individually because he'll consistently face better players at the next level. Still, I think he'll have a lot more room to operate than he did at Kansas, which should help a player with his athletic gifts.

$64,000 Question: How much does his ball-handling develop?

Fellow LB writer and Draft Express' Derek Bodner has alluded to this multiple times on Twitter, and I agree with him. Andrew Wiggins' ball-handling is a textbook example of a swing skill, the single attribute most crucial a high-upside player's — Wiggins is the upsidiest, which isn't a word — career. If he develops an advanced handle, watch out. If not, then there's a limit on how good he can be.

MCW and the Swing Skill 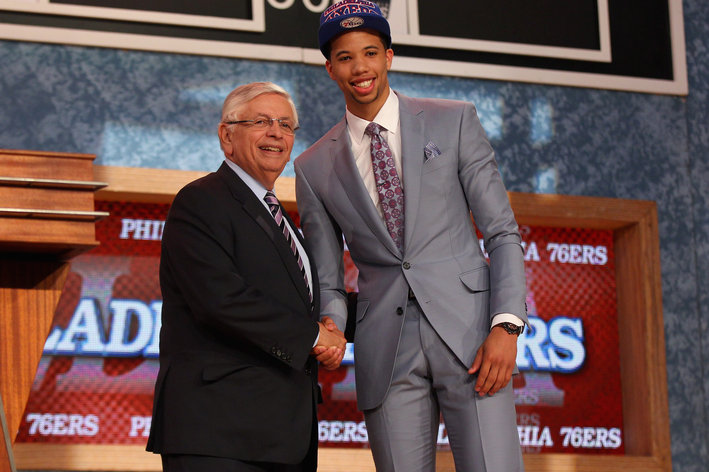 From last July: Can MCW develop a jumper?

The word "mechanical" has often been used to describe Wiggins' game. It's true, as his rudimentary ball-handling skills force him to focus on the mechanism of dribbling the basketball. This leads to poor awareness in other areas, like passing and finishing layups. If college hoops was Paperboy 2 on Super Nintendo, Wiggins was succeeding while only half knowing how to ride a bicycle. That won't fly in the pros.

I look back at how well he executed quick one and two-dribble step-back or pull-up moves, like the one he hit over Amile Jefferson to effectively end the Duke game, and see a ton of potential as a scorer. He was confident in his handle on those moves, which were pretty much unguardable. Can he extend that confidence to the times when he has to take four or five dribbles and drive through traffic? Swing skill.

Agree? Disagree? Have at it in the comments, and feel free to talk about other prospects too. Maybe you want to fret about Jabari potentially (gulp) staying at Duke.