My Men Cards, or The Eternal Sunshine of a Sportless Mind

It's the offseason, which means we're off the clock, which means the only people still reading this blog have a disease or several, so we can do whatever the hell we want. My friend Emma is a comedy writer and knows nothing about the Sixers or basketball or how to manufacture wool. Treat her like family. Not the kind of family you kiss on the mouth even when they have a cold. You don't know her. She's my friend. - ML

Share All sharing options for: My Men Cards, or The Eternal Sunshine of a Sportless Mind

Jesse bought those little foil packs, and I'd sit on the carpeted floor of his bedroom praying to the sports gods that there would be a few cards in the ...deck? pack? flock?... that he wouldn't want. After he went through them all and (according to my memory, because in my memory it's always 1952, Chicago) said, "Need ‘em, got ‘em, need ‘em, need ‘em," he'd toss a few in my direction.

Finally, the words I'd been longing to hear! "Ugh, take these."

Like a small gremlin, or an 80-year-old woman on Hoarders, I'd grab the unwanted cards and clutch them close to my chest. I think I might have sniffed them and they might have even smelled like fresh cardboard and bubble gum. Did bubble gum actually come in those packs, or are all my memories from Dennis the Menace? I can't answer that for sure. But who cares! Mine mine mine! I'd run out of the room before Jesse could realize he'd made a HUGE mistake. What. An. Idiot.

In the privacy of a linen closet somewhere down the hall, I'd count my winnings. 1 man card, 2 man card, 3 man card. Some of the men had shorts! Some had hair! Some had no hair! Some were tall! Stories about their bodies were on the backs of the cards! Tell me how tall this man is!!! Ok! 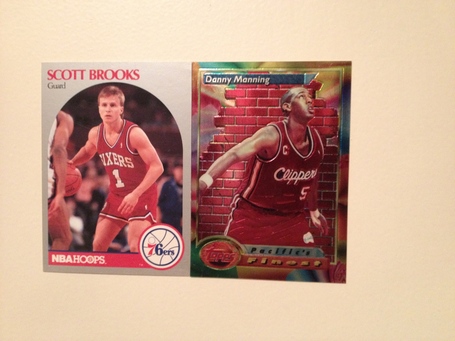 My favorite cards were the transparent or sparkly ones. I knew that meant those particular men were special men. I could put the special men cards in the pockets of my overalls and they could come with me wherever I went forever and ever. All the men! The men had numbers on their shiny outfits-the higher the number the more I liked the man. They had nicknames like "guard" and "rookie." They had their interests listed, like "Mavericks" and "Nets." Of course you like nets! There are nets on every card! These men were so funny. I knew everything about my men.

After counting and sniffing and arranging my men cards into various patterns on the carpet, I'd stuff them into an Airwalk shoebox and run my creepy 8-year-old finger down the stacks. As the weeks went by, Jesse would give me doubles and triples of the same cards over and over, and I took pride in how many duplicates I had of one man. Three times one man equaled ME AS THE QUEEN. One "Jeff Hornacek" and his tall socks were my royal subjects.

I treasured my collection for the rest of my life, until like a year later when Pogs came around. Then I stuffed my Airwalk box into my closet and never saw it again, until a month ago. I looked up the cards on eBay to see if I could finally prove to Jesse how wrong he was, rejecting those fancy men. Lo and behold, some of the cards are going for like a dollar each! I have about 1 million cards, so if I can sell each individually, that's about 1 million dollars.

This article serves as a sales ad. Please buy my men cards.

Emma Barrie has also written for the New York Times and The Hairpin and This Recording. Here is her website. Here is her Twitter. Here is a goat. It is not hers.