The Status of Every Sixers Draft Pick

The Sixers own 7 selections in the 2014 draft. Here are where they stand at the end of the regular season.

Share All sharing options for: The Status of Every Sixers Draft Pick

The New Orleans Pelicans beat the Houston Rockets last night. Because of this, the Pelicans finished the season with the 10th worst record in the league, one game better than the Cleveland Cavaliers. This secured the positioning headed into the draft lottery for the most important asset completely out of the team's control. As you'll see below, the Sixers will almost assuredly keep that pick (fingers crossed).

There's going to be a lot of confusion about the Sixers' draft status going forward. 7 picks is about 4 too many to keep track of, after all. But we're here to serve you, and more importantly, we need to make sure we don't mess up the draft order and picks ourselves. With that being said, until May 20th, here is your draft odds and spots table. You may want to bookmark this for May 20th. 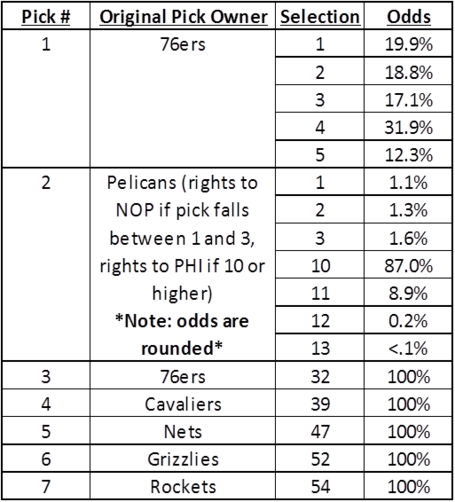 Some additional items of note: