Kelly green uniforms might make a return to Philadelphia, just not on the team you might think.

Share All sharing options for: Sixers To Fly With Kelly Green Jerseys?

Over at our sister site Bleeding Green Nation, Eagles fans have been clamoring for years for the franchise to bring back the famous kelly green jerseys that helped put the team on the map. There's even a petition online with nearly 12,000 signatures that has been recognized by Philadelphia Eagles owner Jeffrey Lurie.

Well, the light green color way seems poised to make a return to the Philadelphia sports scene, only this time being donned by your very own Philadelphia 76ers.

Via an email obtained from a league source, the Sixers have put together sketches if what the new alternative jerseys may look like, and Liberty Ballers has obtained a photo of them. 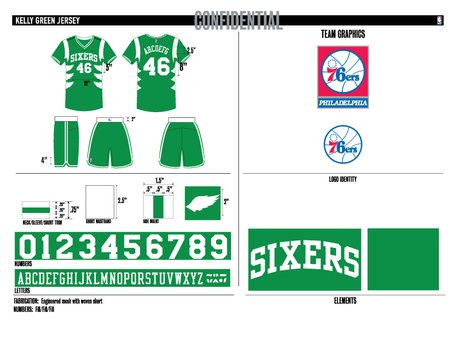 The source went on to say that these jerseys would be worn only on days coinciding with Eagles games, making them essentially exclusive to the fall and winter. Notice the wings around the torso and wrapping onto the back, similar to the helmet which the Eagles wear. These would also come with sleeves, a newly popular trend in the NBA with supporters and detractors, most notably LeBron James.

Personally I think these jerseys are a really nice touch, and a good way to build some unity between the two best teams in Philadelphia professional sports. I'll be looking forward to seeing these on the court in the near future.