One More Year: Why Henry Sims Should Be Kept

"I want to have him over for dinner." - head coach Brett Brown

Share All sharing options for: One More Year: Why Henry Sims Should Be Kept

There were four phases of excitement after the Sixers traded Spencer Hawes to the Cleveland Cavaliers on deadline day. The first was the elation over finally getting rid of Hawes, the crazy, Conservative center who just couldn't handle the starting role. The second phase was acquiring two relatively high second round picks in the 2014 draft, two more fun chips for general manager Sam Hinkie to play with. Earl Clark (released not even 24 hours later) making for a decent backup swingman was phase three. The realization that the trade also included Henry Sims was stage four, because well, who the hell is he?

Sims, a 6'10" center from Georgetown played sparingly for Cleveland, seeing action in just 20 games while averaging eight minutes a contest. But in just his first practice with the Sixers he turned heads, evoking feelings from his coach similar to a man crush.

Brett Brown's reaction to Henry Sims' desire to play solid defense: "I want to hug him, start crying and have him over for dinner."

Brown sure as hell wasn't planning on inviting Evan Turner over for dinner.

It's not always pretty watching Sims play. His feet and brain don't always look like they're connected, resulting in a lot of fouls (averaging over three per game). Sometimes it looks like Sims hands are made of cinderblocks as he struggles to get easy control of the basketball when it is within his vicinity. But what he lacks in apparent basketball skill he makes up in effort and smarts. He isn't under contract past this year, he gives the Sixers a willing and able defender worth holding onto. Check out how his skill defending the pick and roll. 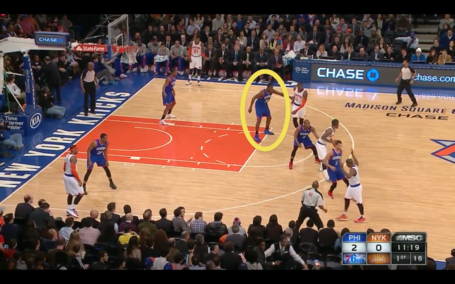 Sims (circled in yellow) is guarding Amar'e Stoudemire, who is about to come set a pick on James Anderson to free up J.R. Smith. 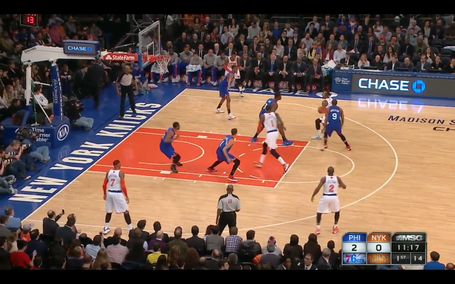 Sims does a real good job of stepping out on Smith to prevent an open shot but doesn't overcommit, fully aware Stoudemire is cutting to the basket in behind him. He then helps force a cross court pass to Carmelo Anthony in the corner. 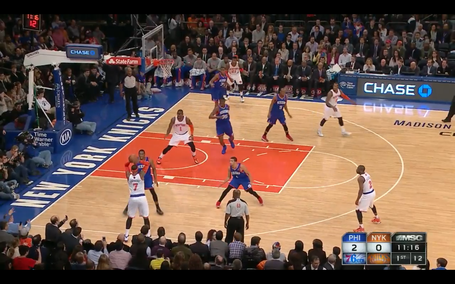 Now rotating back into the low post, he immediately reads Anthony trying to feed the ball in low to Stoudemire and jumps the pass. Stoudemire fumbles with it, Sims scoops up the turnover and the Sixers are headed the other way. 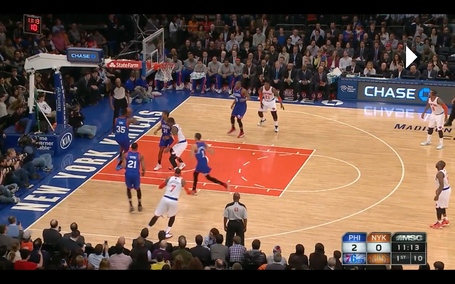 For a player who moves like has tree stumps for legs, that's some genuinely good quickness to re-adjust to the play and cut off the pass. He made a habit of that throughout the game. . 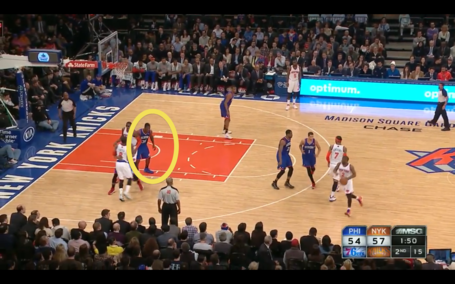 Here is Sims once again guarding Stoudemire in the low block. J.R. Smith here tries to push his way through, almost using James Anderson to pick Sims, hopefully allowing Amar'e to create some space for a post up. But Henry Sims ain't no damn fool. 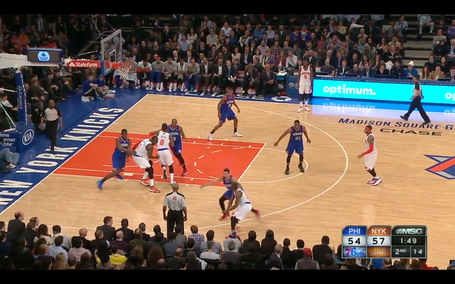 He reads it like a book, jumping around Stat and cutting off a pass from Felton. Another well read play by Sims, another chance for the Sixers to get some points off a turnover. 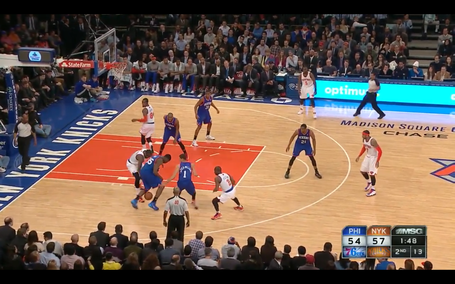 Between his above average defensive instincts and his strong rebounding capabilities, the Sixers have a competent, defensive minded center for the first time in a while. Granted, if all is right with Nerlens Noel next season then he is the obvious starter, but it's nice to know that there won't be a severe drop off defensively when Sims hops on the court in his place.

If Brett Brown wants to have him over for dinner at some point, Sims should accept. Just as long as Brown lets him eat on the court next season too.