Your NCAA Tournament Office Pool: Let the Sixers Help You

Share All sharing options for: Your NCAA Tournament Office Pool: Let the Sixers Help You

March Madness is both the best and most annoying time of the year. People don't schedule vacation days, or fake sick a la DJ Tanner, just to watch weekday afternoon basketball. They take off from work, because they're tired of hearing from Ned in Accounting and his sleeper picks.

Give it a rest, Ned.

Now, we all know that Ned hasn't studied the Southland Conference as closely as you have. You're the only guy in your office that knows that Oral Roberts is heading back to the Summit League next year. Yet, despite all of your college hoops knowledge, we also know that you have zero chance of winning your office pool. None. Zilch. Nada.

So let's remove intelligence from the equation. Everyone knows that the only reason you never win your pool is because A) you're too smart for your own good and B) the pool is culturally biased. So why not let the Sixers help you? Sure, our Sixers haven't won a game since Marcy's Playground topped the charts, but that just means they're long overdue. They can't win a game, but they will win you your pool.

The premise was simple. Look at a school. Think of a Sixer alum who attended that school. First one that came to my head. If I couldn't think of someone, I cheated, using Basketball-Reference. Winners are underlined.

The pank is always open. Mad Max would've been positively delightful on this year's Sixers team. Just shoot until your little heart is content, Vernon.

Jeremy ran hard, but got stopped dead in his tracks at the foul line.

Which leads to a Vonteego vs. Vernon match-up in the second round. Who says the NCAA Committee doesn't have a sense of humor?

My head says Ruffin would be too much in the post, but my heart says never bet against a guy with great hair. Eric Leckner agrees.

MacLean in a nail-biter.

When I got to this match-up, I immediately wrote down, "John Wallace." John Wallace never played for the Sixers. Then I completely forgot about Michael Carter-Williams. This season has taken a lot out of me.

Are we sure Adam Keefe was never a Sixer? Casey Jacobson? A Collins Brother? A Lopez Brother? Brevin Knight? Jesse Spano? Mark Madsen? Anyone at all? Did Zach Ertz get a 10-day contract after I blacked out covering a Sixers/Magic game?

*The Sixers Bracket is not high on New Mexico.

Rex Walters had the smoothest jumper this side of the Mississippi. Just gorgeous. It gave me goose bumps. It even gave R.L Stine goose bumps.

Despite the mass Sixers/Nets player exchange in the mid-1990s, Yinka Dare never played for the Sixers. Rodney Carney, on the other hand, would probably be the third best player on the Sixers right now.

So many Bearcats to choose from. I see Kenny Satterfield batting his eye at me, but, in March, it's all about low-post play and hard screens. And Corie Blount is more dangerous than a five-month-old hot dog at 7-Eleven.

Your neck must be cold, Mike.

Snow's gonna be a tough out. In March, it's all about point guard play and intangibles. Now if only there was an Eric Snow Mix Tape on You Tube that I could--

Never a doubt. The You Tube user, King MISIEK, should just be canonized by now.

Herbert Hill is referenced at least four times a day on this site. We're obsessed. Most of you started watching One Tree Hill, because you thought it was a Hoop Dreams­-like documentary covering Herbert's journey to the League.

It wasn't. But by Season 3, you were already pot committed.

If Ahmad Nivins had a cup of coffee with the Sixers, this could be a different story. But, alas, former Jordan Sams pet Big Shot Donyell sneaks by the Roman Catholic grad with a clutch three in the waning moments.

Shoot the ball, '85 Nova. Nobody outside the Main Line wants to sit around and watch you guys take the air out of the ball. Bravo on your fluke championship. You won six games of glorified keep away. I like the Big 5, but I don't have to like Villanova.

My apologies to all the Ivan McFarlin fans in the audience.

Remember when Jeremy Pargo blew up in his first game here in Philly. And there were some of us, although we'll never admit it now, that thought, "Hey, maybe we found our back-up point guard?" Yeah, me neither.

I had my Nate Wolters upset special all queued up, but then I remembered that he went to SOUTH Dakota St. What a letdown.

My pops used to get Sixers tickets through a guy known only as, ‘Uncle Harvey.' To my knowledge, Uncle Harvey was neither my uncle nor named ‘Harvey.' But as a kid, I liked to think that my dad was friends with Harvey Grant.

Michael Cage and I have been kindred spirits ever since I screamed, "Hey, Juice Man!" when he checked in at the scorer's table one cold, wintery night. Cage looked up at me and nodded in approval. OK, I mean, maybe ‘nod' isn't the right word. That's a bit strong. Cage, well, he looked in my direction, like, he was definitely looking in my general vicinity. It was my section basically.

Juice Man moved his head. It was an understated motion, a subtle gesture. But a gesture of acknowledgement, respect. Like he was saying, "I see you over there, Dave."

Doesn't get much better than Skinner and Hoppen.

If my Remember This Guy coffee table book ever comes to fruition, you can rest assure that we'll have a thousand words dedicated to Brian Skinner under the title, "Players I Vehemently Hated Back Then, But Now I Can't Remember Why."

And here is the obligatory Charles Barkley/Dave Hoppen reference.

Listen, I get it. The Creighton-Philly pipeline has been quite kind to Sixers fans. We have Korver, The Sheriff. Those grounds are fertile indeed.

But you never, ever, bet against the Boston Strangler.

I have no idea whether Kazemi is any good, but he's better than Shawn Bradley. And Brandon Davies, too, for that matter.

One spring day in 1970 Al Henry picked up his telephone in Madison, Wis. and heard a man who introduced himself as Jack Kiser of the Philadelphia Daily News say, "Congratulations! The 76ers have picked you 12th in the first round of the NBA draft."

Henry, a 6'9" center who had been the object of no more than cursory scrutiny by most pro clubs while playing for Wisconsin, answered, "Don't you mean I was the first player picked in the 12th round?" (Sports Illustrated; January 8th, 1973)

Nobody? Maybe Xavier McDaniel was a Sixer for a few days? Maybe he snuck in with Tom Chambers? No? Nothing?

Ok, then. Could spell trouble for the Shockers.

By my count, zero Sixers have attended Kansas St; although, that will change as soon as Hinkie signs Bill Walker in April. But as of now? Nothing. Despite every trade you may have made in NBA Live, Mitch Richmond was never actually a Sixer. Only in the virtual sense.

I am at the disadvantage of writing this before the Play-In games, but always take Tyrone Hill over the two-headed monster of Charles Shackleford and Lorenzo Brown. That's common practice.

I can't do any better than Kenny Payne. I've let you all down. Speaking of players from the '91 Sixers, all I want for my 30th birthday is to play an uninterrupted game of Tecmo NBA Basketball with Roy Burton.

What, did you expect me to pick Lou Roe?

Did you guys read this? What the hell is going on down there at Duke? I hate the backlash this girl received and I hate that she goes to Duke. What a bummer. If she went to Maryland and confided in a young freshman blogger named Jake, this never would have become a story. Jake has sources, plenty of ‘em, and not even the NSA has the slightest idea who they are.

Should Of Kept Confided in Jake P.

Every time I hear Kurt Nimphius' name, I think of LB Commentator and residential Golden Girls expert, Nimphius, and think to myself:

"Clothesline and a beauty."

If Doug Collins was still the Sixers coach, Ivey would probably be playing fifteen minutes a game just to spite the Game Threads.

Did any of you make it to Chris Webber Appreciation Night? 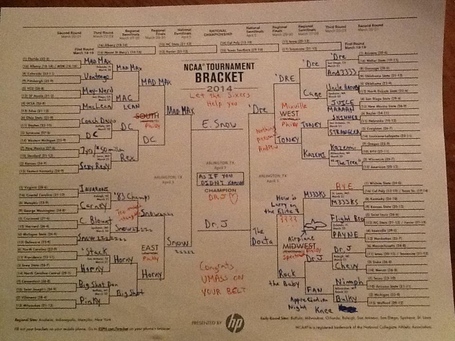 Congrats to Dr. J and UMass. Please send 50% of your office pool winnings to: