The 76ers acquired 25 year old Byron Mullens at the trade deadline, a 7' center with three point range and one year remaining on his contract. Should 76ers fans care?

Share All sharing options for: Making Sense of the Byron Mullens Trade

There have been very few moves made during Sam Hinkie's short stint as the Philadelphia 76ers head honcho that have left me scratching my head.  Even on trades where the return may have been underwhelming, the reasoning behind it was easy to figure out. When news came down that the 76ers had acquired Clippers center Byron Mullens, I was legitimately flabbergasted.

Let's turn our attention back to draft day 2013, when Hinkie, in his first major move with the 76ers, traded the team's all-star point guard.  The initial report came out that the 76ers had traded Jrue Holiday and their 2014 1st round draft pick for Nerlens Noel.  The media room at the Barclays Center erupted in pandemonium.  Including our 2014 first round pick?  After just trading our all-star point guard for a player who may not play the entire season, and was going to need time to develop regardless?  The pick was almost destined to be a top pick, especially since we hadn't yet known what Michael Carter-Williams would become.  It seemed as if Hinkie had overpaid for a good, but not franchise level prospect.

As we now know, the report was wrong.  The Sixers would be getting the 2014 1st round pick from the Pelicans, not the other way around.  When the Byron Mullens trade came down, my first reaction was Bryon Mullens?  We gave up a second round pick for Byron Mullens?  Really?

My second reaction was that the report was wrong, or at least missing information.  It went against everything I had thought I had known about Mullens.  With how much Hinkie values second round picks, he'd give one up for one of the least efficient offensive centers ever?  As it turns out, the initial report was missing two crucial pieces of information.  First, that the second round pick the Sixers were sending to the Clippers was top 55 protected.  In other words, it will never be conveyed.  The other missing info was the Clippers' 2018 second round pick going back to Philly.

Okay.  I was able to calm down.  Somewhat.  The Sixers would likely never send anything out, but they also wouldn't get anything in return for 4 years.  That probably makes sense when dealing with a team as good as the Clippers, as perhaps that pick will be more worthwhile in 4 years after age, injury, and roster moves potentially take their toll.

Still, the return is less than stellar.  And now I'm faced with the prospects of watching Byron Mullens eat up minutes on my favorite team.  Byron Mullens?  Really?

Apparently, Sam Hinkie likes Byron Mullens, or at least that's the information being told to the media.  I'm not sure I agree with that sentiment.  Luckily, I'm also not sure how much I believe that was a truthful statement from Hinkie.

Mullens has seen very little time so far this season with the Clippers, which makes sense why they would want to give up a small asset to dump his contract.  So in order to really look at Mullens the player, you have to go back and look at his time with the Bobcats.  Mullens played nearly 2900 minutes in two seasons with Charlotte, a completely astounding number for a player as bad as he is.  Had it been any team other than the Bobcats you would assume it was the most overt tanking strategy in the history of the league.  Mullens has only played a combined 306 minutes during his three seasons in the NBA outside of Charlotte.

When looking at those two seasons with Charlotte, they weren't pretty.  In fact, if you look at the history of the NBA, there have only been 8 player seasons where a 7 footer has had a season with 1400+ minutes played, a true shooting percentage of less than 47.5%, and a usage rating of 20% or more.  Byron Mullens has two of those seasons.  The only other person to do it twice was Michael Olowokandi.  The list is rounded out with single seasons from Shawn Bradley, Randy Breuer, Joe Barry Carroll, and Yi Jianlian.  It's pretty bad company to be in when Shawn Bradley is the best player on a list.

Teams don't normally let a player as bad as Byron Mullens play that many minutes and take that many shots.

Here is the shot chart, in all of its splendid glory. 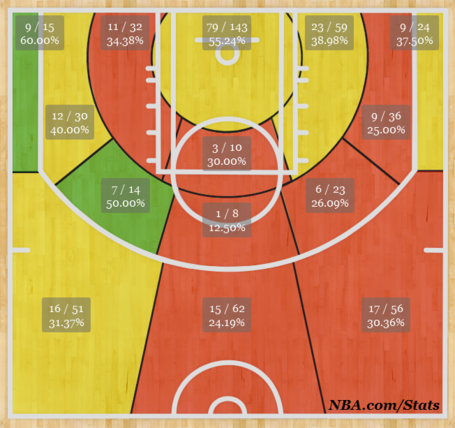 There are two pretty obvious takeaways: holy crap does Byron Mullens like his jump shot, and oh man is he not all that good at shooting them.  Last year with the Clippers, 208 of Mullens 563 field goal attempts were from three point range, despite only shooting 31.7% on them.  To his credit, those three pointers did have a better expected value than the midrange shots he took (where he connected at only a 32.2% clip).  I suppose you can look at that as a positive.  I might ask him to find that painted area myself, personally.

I suppose maybe that is what Hinkie and Brett Brown see.  Maybe if they can reign in that shot selection, limit his threes just a little bit, cut out the midrange game and use those shot doctors to improve that three point percentage up to a level where it actually makes sense to be launching them, they can turn his career around.  I'm not sure I see it.  Mullens has so many bad habits to break that it's much more likely the only basketball return the Sixers see from this trade is that 2018 second round pick.  But at least his contract for next season is only for the minimum.

The other side of the court isn't much more intriguing for Mullens.  He's a downright terrible pick and roll defender, and a bad defender in space in general.  He has a pretty horrendous cocktail of slow foot speed, slower overall reaction, and disinterest.  He doesn't even defend the post all that well either, as he tends to be far too upright and does a poor job holding his ground despite his size.  He can occasionally block a shot by accident and is sometimes useful (but inconsistent) on the defensive glass, so there's that.

I suppose we can look at some on-court/off-court splits of Mullens last season with the Bobcats.  Brace yourself.  These aren't as bad as his shot chart, but they're not pretty, either.

Of all the players in the league, Byron Mullens is probably one of my 5 least favorite players, in terms of on the court basketball play.  When I set out to write this article, I convinced myself that I would find something, anything, positive to say to try to explain the acquisition.  Of course, that was when I thought the Sixers were giving up assets for him, so that became a little bit easier when the details of the draft pick(s) were announced.  Still, here's what I came up with: