An Extermination: Inside Sixers Loss to Clippers

"A red sun rises, blood has been spilled this night." - Legolas on Sixers/Clippers.

Share All sharing options for: An Extermination: Inside Sixers Loss to Clippers

But the true impact of last night's game could not have been felt anywhere outside of the Staples Center in downtown Los Angeles.

I WAS THERE, GANDALF. I WAS THERE THE DAY THE STRENGTH OF MEN FAILED. Elrond

I was there for it. Sitting a thousand feet in the air. Watching the destruction from above like an off-balance 12-year-old playing RollerCoaster Tycoon. Years from now, I'll tell my children of this night. Years from then, they'll tell their children of this night. A few years later, they'll get laid at freshman orientation because their grandfather was at this game, live-tweeting it not as a blogger, but as a stenographer to the court of life.

Gravity need not apply. And it didn't.

This was the first regular season NBA game I've covered. I almost didn't get the chance to cover it (juicy story here on this week's Rights to Ricky Sanchez). It was perfect. This is enough to hang up my journalistic boots and walk off into the sunset. God bless Keith Pompey, and Molly Sullivan, and Max Rappaport, all lovely people who do this for a living and have to pretend that this isn't one big assault on humanity. I'm the asshole who can waltz in and out of prison, snap a few photos for Instagram, and leave a free man. Their fate is bound to that of the team, like Arwen's to the Ring before them.

With a heavy heart, here's the shot chart through three quarters. 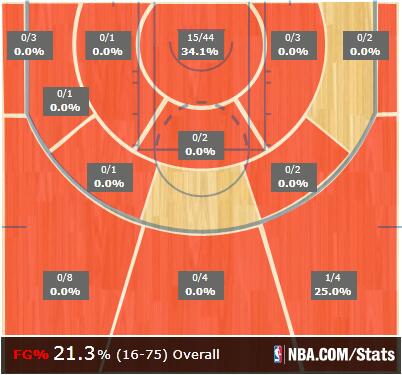 The Sixers could not make anything at all. Like the ball they were using was just too big for the rim like the game at Six Flags. They had a better chance of scoring if they held onto the ball for 24 seconds and hoped the scoreboard operator made a mistake.

Late in the 3rd quarter, the Staples Center added insult to slaughter by starting The Wave. Numerous Sixers were seen trying to drown themselves in it.

The atmosphere inside is what I imagine the Ancient Roman arenas were like, as gladiators beat each other to death in the center for their entertainment. Bloodlust like nothing I've ever seen. The Punic Wars had absolutely nothing on this night. The game ended.

The aftermath. Seeing as it was my first NBA game as a credentialed journalist that didn't feature Adam Morrison and/or Justin Dentmon and/or Deron Washington (you're still my #1, Vegas Summer League), I had planned on venturing into the Sixers locker room after the game. As the deficit reached the 40's, I grew concerned that just maybe these guys wouldn't be in the mood to talk about which Matthew McConaughey movie is their favorite (word is Hawes likes Dallas Buyers Club).

But I lingered outside the locker room anyhow. The scene was hushed like a funeral as we waited for the family to walk in. I was psyching myself into not smiling about the game once I got into the locker room. Brett Brown came out and said some nice things. He's really excellent at this.

The locker room opened up. Immediately spotted the mean mugs of Tony Wroten, James Anderson, and Lorenzo Brown as the three guys I would not be talking to. Reporters surrounded Evan Turner and Thaddeus Young. Lavoy Allen (a miraculous +5 on the night) was rewarding himself with post-game pasta. Arnett Moultrie was tending to his ankle. Mood was delicate.

Decided to stay in my wheelhouse and shoot the shit with Spencer Hawes for a few minutes. All I can say is he's aware of all the trade talk and he's just waiting for it to all shake out like the rest of us over the next 10 days. He's the best, for real.

Walked back out onto the court to survey Ground Zero one last time. The court felt the weight of what had just transpired. It will never be the same. Neither will I. Will this abolishment make the players better? I don't know. Will it make me a better person? I pray it will.

I pray it will.

Sixers back at it against the Warriors tonight. Schedule-makers are sadists.