Sixers vs. Blazers vs. Eagles vs. Saints Preview

Two weeks in a row, I've had the Sixers recap at the same time as the Eagles game. Horsecrap.

Share All sharing options for: Sixers vs. Blazers vs. Eagles vs. Saints Preview

The Sixers play the Blazers in Portland tonight and if they don't lose this game, I'm fairly certain that will be the end of Team Chill once and for all (actually no, the February 20th Trade Deadline will mark the true end of Team Chill). Brett Brown's team has won three straight road games after losing their previous thirteen, because Sixers Be Crazy. This loss is especially vital because there are many, many winnable games on the horizon with the team as currently constructed.

When the team's last met, the Blazers scored 139 points, which was a lot more than the Sixers scored. Expect something similar tonight. I'm especially looking forward to Thomas Robinson yelling "LUNCH MEAT" at Spencer Hawes guarding LaMarcus Aldridge. Google it.

But really, all of that is secondary to Eagles/Saints tonight. By the time the Sixers game comes on (10:00 EST), your scrotum will be so tight shoving a full Christmas ham up there watching playoff football, I highly doubt you'll want to watch this lovable bunch of Davieses lose by 45 to one of the best teams in the NBA. 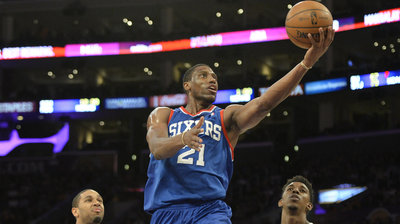 Since his trade request, Thad has been excellent.

So I'd like to direct you to this fancy Eagles preview written by the Started From The Bottom Now He Here managing editor of Bleeding Green Nation, Brandon Gowton, formerly Brandon Lee AKA PhiladelphiaEagles AKA PhillyFollower. It's a big night for him and he's a big man. He's always got a place at LB, and he's actually got the game thread in three weeks vs. OKC so dude better not bail.

Some bullet points for #blogsynergy:

That should do it. Go Eagles. Go Not Sixers. Let's rock.