Whenever Evan speaks, it's like going through a tunnel. You just have to hold your breath until you pass out.

As Tony Wroten takes his time recovering from a sprained ankle ("I ain't rushing back"), Brett Brown is using Evan Turner to back up Michael Carter-Williams, along with the Head of Newark Highway Patrol, Lorenzo Brown. The thought that Evan should be or likens himself to be a point guard is one that has popped up like a confused groundhog every so often since the Sixers drafted him. 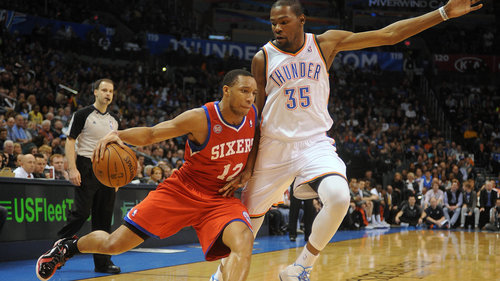 There are points to be made in either direction -- on the one hand, Evan is mostly useless when he's playing off the ball. His jumper is far from reliable, and he spends too much time with his hands in his pockets in the corner. But when he's running the point, he's also not using his teammates enough, focusing instead on taking contested 16-footers and usually getting his shot blocked, then complaining to the refs for a good half hour.

But as is always the case with reality, everybody interprets it their own way, and thanks to Chris Vito, we have a moment of zen from the soon-to-be-traded Evan Turner.

Evan Turner on playing point with Wroten hurt: "I actually get the ball. That’s cool. That’s what you want. Get me the rock, you feel me?"

I'm going back to bed.