The “In Lieu of Jrue” NBA Prospect Watch, El Nueve

We go over everything from Shovegate, to Rodney Hood, to P.J. Hairston's D-League excellence.

Share All sharing options for: The “In Lieu of Jrue” NBA Prospect Watch, El Nueve

Two forty point losses got you down? Let's talk about players that aren't on the team!

One Big Thing: What's up with Marcus Smart?

Before Michael Sam's historic announcement on Sunday night, Marcus Smart's incident late during Saturday's loss to middling Texas Tech seemed bound to dominate the news cycle. If you haven't seen it, where the hell were you so I can hide from the "DUDE LEBRON SHOULD DUNK" storyline? Here's the video.

Surrounding "Shovegate," there are institutional issues at play like a multi-billion dollar industry not fairly compensating its most important employees and a fan culture that includes middle-aged men consistently hurling insults at college students. For this exercise, though, our interest specifically pertains to the 19-year-old in question.

This wasn't a good look for Marcus Smart. As harmless as the shove really was — Jeff Orr should receive a flopping warning from College Adam Silver sometime soon — players can't actively go into the stands and put their hands on fans. That's fairly straightforward stuff.

It would be unfair to disregard the outburst and completely chalk it up to youthful emotion just as it would to write off Marcus Smart as pre-Chubbs Happy Gilmore. The answer, similar to most things, probably lies somewhere in the middle. Luckily for us, where exactly is for NBA decision makers to find out.

Of particular interest is that before the season, Smart's character was virtually unassailable. He was viewed like a superhero, MISTER INTANGIBLE. Plaudits, like this snippet from a preseason piece written by ESPN's Jeff Goodman, were the norm: "Smart is an intangible guy. You can't measure his toughness, his tenacity, his ability to get others to play harder."

If the script hasn't completely flipped, it's been pretty darn close. Intangibles are a super-tricky thing to evaluate, and Smart is a perfect example. Lauded as a program-changing freshman only a year ago, he's now being criticized as a disappointing leader. 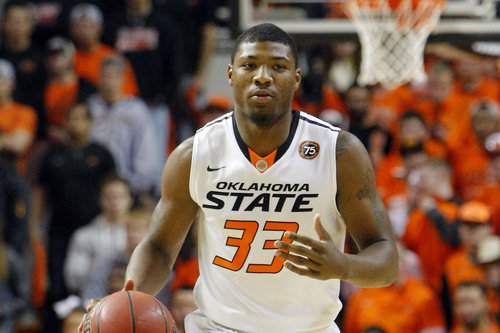 From when it looked Oklahoma State was a Final Four contender

Still, there's a reason we're talking about this stuff: Even though it's an inexact science, building a strong team culture is important. Sam Hinkie, for example, highly values a player's intangibles. To try (key word there, this is not usage rate) and develop a somewhat accurate reading on a prospect's mental makeup, he talks to pretty much everyone that he can find who personally knows that player. College managers, trainers, and even janitors all get their two cents in.

Of course, intangibles are only part of the larger equation. Smart's on-court play has been concerning, specifically his lack of success from beyond the arc*. Only a 29 percent shooter his freshman year, he's actually regressed a little bit to 28 percent. On the bright side, his floor game and overall efficiency have improved, though maybe not as much as expected. Also very importantly, Smart still projects very well as a defender. For the point guard position, he's strong as a bull.

*Here's a question: Who is the last Sixer first rounder that had jump shooting as a major strength coming into the league? It's probably Keith Van Horn, which is actually insane.

In Shovegate's aftermath, it was brought to my attention that Chris Paul did this in college. Amazingly, I didn't remember such an ugly incident (much uglier than Smart's in my opinion, poor Julius Hodge) happening at all, most likely because Paul is an exemplary citizen and has proven to be the best point guard in the world since. There's a lesson in that, somewhere.

A few weeks ago, I took some good-natured flack in the comments for ranking Smart 11th on our meaningless Big Board. My reasoning was simple: Smart's jumper is worrisome, and he's one of the few players in the projected lottery that the Sixers might already have a better version of.

Yet, I feel like last Saturday may have increased Smart's chances of landing in Philly. Let's say Hinkie, who is batting one thousand on drafting big point guards with spotty jumpers, still views Smart as the top-seven player he's been ranked all year. Now, say Smart drops to eleven, where the Pelicans pick has landed. Even if he's a bit redundant with Carter-Williams already in the fold, the Sixers would probably select Smart if he topped Hinkie's draft board. Having two exciting young players and excellent defenders at the point guard position isn't the end of the world, no?

Earlier in the year, I lamely dubbed Julius Randle, Willie Cauley-Stein, and Noah Vonleh as "hot-button" players, because of the range of opinions about their pro prospects. I think we can add Smart to that list now. 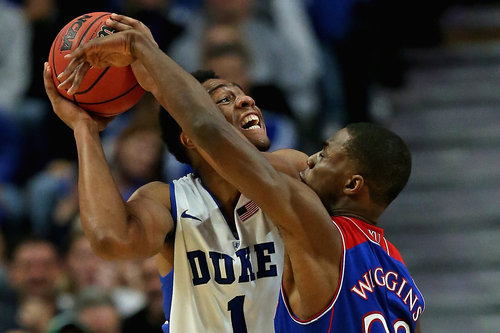 Liberty Ballers on the Upcoming Draft

Whenever I watched P.J. Hairston play in college (admittedly not as much as many, because UNC has an endless bandwagon; Michael Jordan played there, you know), one thing stood out above all: This dude is shooting from four feet behind the line on every three.

The 6-foot-5 Hairston has an NBA-ready three-point stroke, possessing Bob Dylan range*. Unfortunately, he's showing it off in Reno instead of on Tobacco Road. After some trouble with rental cars and suspicion of marijuana, North Carolina basically told him to take a hike.

*At some point in college, my friends heard someone say of the music legend, "He's so deep." We promptly decided to apply his name to anything and everything in everyday life that involved depth, including three-pointer distance.

Well, Hairston is making the most of his second chance, and he's doing it against professionals. Through ten games in the D-League for Texas, he's averaging 26.3 points and 4.5 rebounds while shooting 47.8 percent from the field, including 38.8 percent from 3-point range. On two separate occasions, Hairston broke 40 points.

Obviously, this type of performance will help his stock significantly, and he now looks like a safe bet to be a first-rounder. DX currently has Hairston ranked 17th overall, and I feel like anything after that spot is solid value for the ex-Tar Heel. Defensively, he's not a great athlete, but most of his problems on that end are reportedly effort-based. From what I remember, he played a lot as a stretch four in college and therefore mainly guarded bigger players.

Acquiring Hairston's combination of size and shooting in the back half of the first round could really help a contender, or (Hink, Hink) a team with a contender's first-round pick. That is, assuming his character checks out.

Last time, Levin wrote about how much he loved Wayne Selden in this spot. I thought we'd change it up and let the honorable Jake Pavorsky talk about one of his favorite prospects: Pelicans pick possibility Rodney Hood.

At the beginning of the year, everybody wants to watch college basketball's top two freshman: Andrew Wiggins and Jabari Parker. So when I tuned into Duke-East Carolina back in November, I expected Parker to be the game's most dominant force. He played well, finishing the night with 21 points, but he was surprisingly overshadowed by one of his teammates. I sat and watched a lanky #5 hit one three. Then another. Then he started taking defenders off the dribble. That #5 ended with a game high 30 points, which made me say, "Who the hell is this guy?"

That guy was Rodney Hood, a sophomore transfer from Mississippi State. Hood has been absolutely lights out this year, averaging 16.5 points on 49.4% shooting, and 45% from deep. If he decides to declare for the draft this year (and I imagine he would), there's a good chance he'll be there when the Pelicans pick rolls around. The Sixers would be silly to pass on who I think is the purest shooter in this draft. 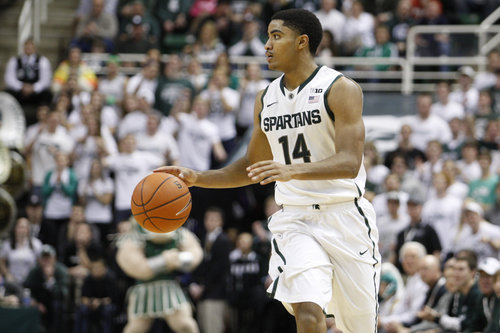 See who the Sixers got

The lefty can is long and athletic enough to play either the small forward or two guard position, but would be a perfect compliment to Michael Carter-Williams in the backcourt. The threat of Carter-Williams driving will continue to force defenses to collapse, thus giving Hood some room to shoot around the perimeter. There's a good chance he won't miss those to often. Hood can catch and shoot, and draw contact around the rim, although he doesn't do it often enough.

He's not a real physical defender, he gets lazy and doesn't rebound well enough, but what he does offensively makes up for his lack of defense. I think Hood projects as a smaller Jeff Green, and I sure as hell want him.

Where is Kelly Tripucka?

Ah, a tradition unlike any other. The Irish have gone 2-2 since, with OT wins over Clemson and Boston College.

Duke is a bad defensive team, sitting at 89th in KenPom's adjusted defense rankings, and Parker plays heavy minutes for the Blue Devils. While his perimeter defense against NBA players still worries me (I have him ranked third overall, so it's only relative), his defensive rebounding and shot blocking have sneakily been pretty impressive. While Parker may never be a great defender, he's shown some helpful flashes on that end in college.

The terrifically named 19-year-old Clint Capela is having a standout season in Pro A France, adding onto what has been a fantastic start to the year for Swiss sports. Roger Federer made the semis of the Aussie Open, which countryman Stanislas "The Stanimal" Wawrinka won, in case you were wondering. If not, get with it.

Believe it or not, I haven't watched much Chalon so far this year, so the DX scouting report will have to suffice. Capela, who has risen into the first round of many mock drafts, reminds me a little bit of Theo Ratliff and to a slightly lesser degree, Nerlens Noel. His strengths are as a weak-side shot blocker and pick-and-roll finisher.

Mainly, the 6-foot-10 Capela seems to need to get stronger. His per-minute numbers in France's highest division and the Eurocup are already excellent, though. Through 18 games in France, he's averaging 7.4 points, 5.7 rebounds, 2.0 blocks, and 0.6 steals in only 18.2 minutes per game. In the Eurocup (second-tier European league, but still good competition), he's averaging 11.2 points, 6.5 rebounds, and 1.1 blocks in 19.8 minutes per game.

Whatever drafts the heir to Thabo Sefalosha will be getting a great name, but more importantly, an intriguing skillset.

Three Games to Watch This Week

9:00 Saturday: Florida at Kentucky. The young Wildcats, loaded with prospects, were thought to be the SEC juggernaut heading into the year. Instead, that distinction belongs to the Gators, who have recently added a major prospect to the lineup in bouncy forward Chris Walker.

5:00 Sunday: Villanova at Creighton. First off, you should want to watch this one anyway to see how Nova responds to that shellacking in South Philly last month #WRAGGEBOMBS. Additionally, Doug McDermott has played two games this season against top ten-caliber competition, Villanova and San Diego State. He was great both times, and I don't want to miss the third.

8:00 Tuesday: Kansas at Texas Tech. Embiid and Wiggins. Wiggins and Embiid. At this point, the Jayhawks are must-see TV anywhere, but they've become more compelling on the road in my opinion. Why? Because they've only lost at home once all year. For the Red Raiders, no Jeff Orr for this one.