As Levin pointed out during yesterday's post detailing the selection of Marcus Smart, the highly fake 2014 NBA Mock Draft is going according to plan so far. This is bad news for anybody outside of the top eight spots. With the Kings' selection of Smart, I think that we have collectively jumped down a tier in the draft.

That's not to say all eight players already selected are going to be stars, as history indicates that there will most likely be relative underperformers or flat-out busts among that group. There's also a lot of talent still left on the mythical board, more than in an average year, even. As far as the prospects' relative value today is concerned, though, I think the respective dropoffs from picks 4 to 5 and 8 to 9 are the steepest in the draft.

Know who isn't bummed out about the ninth pick? The Charlotte Hornets. Two years ago, the then-Bobcats — by the way, a hearty congrats is in order to the Charlotte area for regaining the rightful name of their basketball team — made a shrewd move by picking up a protected first-rounder for taking on an extra year of Ben Gordon's salary in exchange for Corey Maggette. 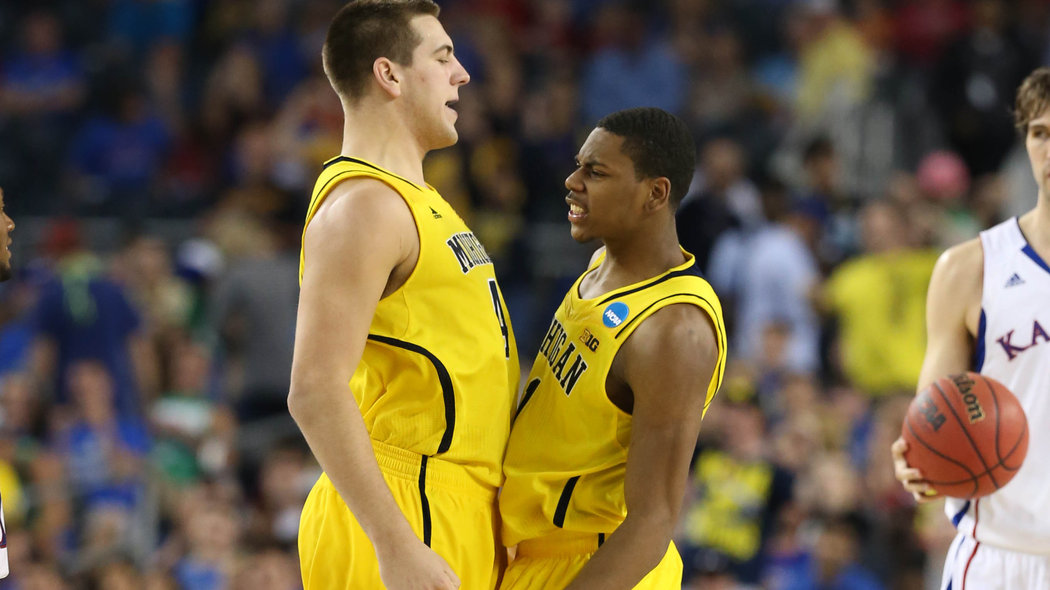 Unfortunately for new Detroit basketball czar Stan Van Gundy, Joe Dumars didn't protect the pick quite enough. Once the Cavaliers leaped into the top three of this year's lottery, Detroit moved down from 8 to 9. The pick had top-eight protection this year, so it went to Charlotte. With that very real pick in this very fake setting, the Charlotte Hornets officially select Nik Stauskas from the University of Michigan.

Why Stauskas? Mostly because he possesses a concrete skill the Bobcats are sorely in need of, three-point shooting. Despite Michigan losing Trey Burke and Tim Hardaway, Jr. to the 2013 NBA Draft (and therefore Stauskas routinely receiving much more attention from opposing defenses), he shot 92-208 (44%) from deep during his sophomore year in Ann Arbor. Stauskas feels like exactly the type of player to surround Al Jefferson with, someone whose three-point sniping can provide Charlotte's star big man with room to operate on the low block.

Stauskas isn't one-dimensional, either. He handles and distributes the basketball well for a 6-foot-6 wing, which could provide scoring-minded point guard Kemba Walker the opportunity to play off the ball in some sets. Defense is generally thought to be Stauskas' biggest question mark, but there aren't many better coaches to learn the complicated nuances of NBA defense under than Steve Clifford. Basically, I think the guy is going to be a good player on a lot of winning teams throughout his professional career. At the ninth pick in this particular draft, that's good enough for me.

We went to Charlotte BobHornets aficionado man from Grantland, friend of the blog and purveyor of late night Jazz-Kings affairs, the magnificent Danny Chau, for his insight:

Nik Stauskas is pale. He’s doughy. He’s got enough hops to dunk between the legs, but he’s not the kinesthetic marvel Luke Babbitt proved to be at the 2010 NBA Draft Combine. He shot 44.2 percent from 3 in college last year. If he were an ice cream, his 12.1 percent (butter)fat percentage would be slightly above average, but not quite at a luxury brand or boutique level; this also conveniently sums up his draft appeal.

Honestly, Stauskas is perfect for Charlotte, so long as you’re not buying into that strange fantasy floating around that he’s some 6’6" Steph Curry in the making. He fills an immense need -- other than Chris Douglas-Roberts, who was brought on near the tailend of 2013, and Gary Neal, a player acquired at the trade deadline, no one else in Charlotte’s backcourt rotation was able to shoot the 3 at even league-average percentages. He’ll have the green light from Day 1. Stauskas' ability to handle the ball and make quick passes on occasion is a plus, especially when it's not completely overblown by his agent and the ventriloquist dummies he controls.

Now comes the crazy: I'm kind of really excited about the defensive prospects of this Stauskas-Hornets union, in theory. Stauskas was an unremarkable (but willing!) defender at Michigan. He’s already got that going for him! And we agree that dude has a real chance to be a solid team defender once he’s blessed with the miracle of Coach Steve Clifford, the man responsible for turning The Defensive Frontcourt Least Likely To Succeed into something inexplicably effective. I'm ready for some of that magic.

If the fictional draft shook out the same way from picks 1-8 and Stauskas was still on the board at 10, I would have hoped Fictional Sam Hinkie, a.k.a. Matt Carey, selected the Canadian Sharpshooter (I see you, Bret Hart fans). Alas, Fictional Rich Cho has taken Stauskas off the board. Come back tomorrow and see what horrible things Matt has cooked up for the local squad.