With the fifth pick in the fake 2014 NBA Draft, the Utah Jazz select Noah Vonleh's hands.

Unfortunately, I don't have the sound clip for the Utah Jazz used by Skeets and friends on The Starters (formerly The Basketball Jones).  Or do I? That right there is called a fakeout which is exactly what I threw at all the other LB writers in making the LB NBA Mock Draft 5th selection for the Jazz.

On a brisk Saturday morning walk (I'm an old man with back problems, multiple) around the ravishing streets of West Bethlehem, I had one thing on my mind. Well, one thing other than how much I'm going to eat at the Greek Food Festival later in the day. Now that the four top prizes of the 2014 draft have been selected, who do I pick for this team out west that I admittedly know very little about?

Sure, I know Gordon Hayward is cute as a button. Derrick Favors is apparently still a thing although I'm not sure I've seen him play since he was dawning those disgusting old New Jersey Nets uniforms. Is John Crotty still suiting up? Really like that guy's potential.

As I strolled down 16th Avenue, the name Marcus Smart was the one that came to mind most frequently. I sent out the selection, and was thinking about how I'd justify it. But as I kept deliberating, the less I liked the pick and within thirty minutes switched it (we have take-backsies in this draft) to the Indiana Hoosier, Noah Vonleh.

When I want my Jazz opinions, I go to the source. Not The Source. I don't need Benzino telling me Trey Burke performed in his rookie season. I don't care if you want to give him 3 mic's, Ben. No, I go to the kind people at SLC Dunk, led by All That Amar. How does the one known as Amar feel about the pick?

Vonleh has the most stretch-four type of game out of the bigs available, and should be an adequate compliment to what the team does with Derrick Favors, Enes Kanter, and Rudy Gobert. There is no perfect pick at #5. And Vonleh is far from a perfect player. It's honestly at this point where I recognize that the Utah Jazz will be in the lotto next year as well.

Included within that e-mail (I'm not making this up) was mention of taking Glenn Close as a giant sleeper pick, but Amar couldn't find confirmation if she declared in time. Her mid-range game is revolutionary. For his and the rest of Jazz fans' collective sake, I hope the papers were filed. This is the kind of outside the box thinking I can get down with.

With Vonleh now off the board and taking his enormous wingspan (7'4.25") to Salt Lake City, Kentucky left Julius Randle remains on the board. Will he end up in Boston? That's up to Justin F.

Side note: for your viewing pleasure, check out this great t-shirt design from our friends over at CheeseSteakTees based on the Utah Jazz logo. Buy it or any of the other fantastic Philadelphia inspired tees here. 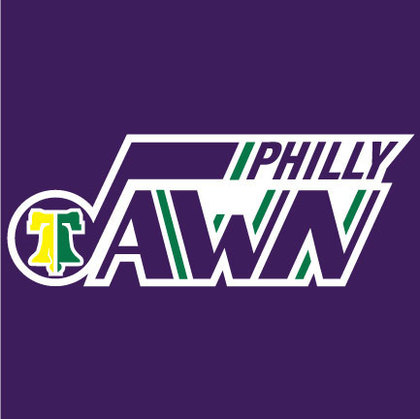