I never thought that 150-200 people would show up to a Sixers NBA Draft Lottery Party. Boy, was I wrong.

Last night was pretty magical. My imagination didn't paint the picture of what was going to occur. There are few words to describe how things went down or even the who, what, or why of it all. No, I'm not talking about the actual 2014 NBA Draft Lottery or the Sixers eventual 3rd and 10th selection.

For the past few weeks, LB and the Rights to Ricky Sanchez podcast have been pimping the Draft Lottery Party. I was excited to catch up with and meet some "internet friends" IRL. And it was to be a nice opportunity to watch something important involving the Sixers' future with others who shared the same enthusiasm.

For all the criticisms that Philly fans endure, warranted or (mostly) unwarranted, true passion and fandom should never be questioned. Echoing ESPN's popular "30 for 30" films tagline, "What if I told you that 200 spirited fans came together for one moment that'd define their team's franchise?"

Shoutout to our friends over at @Liberty_Ballers, who are hosting a lottery party tonight. Sweet shirts! pic.twitter.com/qIJftaevbq

Apparently, showing up an hour in advance of the lottery wasn't early enough. Before 7PM, the actual viewing room/bar was packed with folks sporting a variety of Sixers gear ranging from jerseys to Hinkie appreciation T-shirts. Also, showing up an hour early of the lottery wasn't early enough to snag any of the freebies that were given out, which were reportedly gone by 6:30. 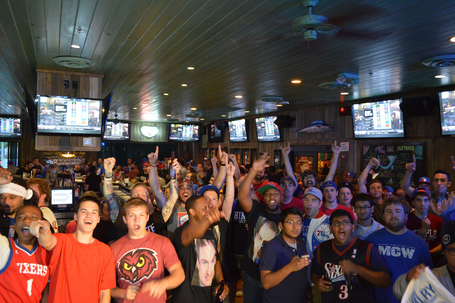 Despite that, it was super fun to see that amount of turn out TURN UP for this event. I had the pleasure of speaking with the parents of our own Mike Levin and learned that the actual room had the capacity of around 140. I can confidently say that the place was bursting at the seams. Moving was unlikely.

I knew I was with the right people to view something like this because of what I heard in the first few minutes of being there: Booing. Oh, it was glorious. During the pregame show, former Sixers coach and least valuable everything Doug Collins' face popped up on the TV, giving his opinion on long 2s, Kwame Brown, or whatever. The chorus of boos that permeated throughout the whole building was just perfect and the highlight of the night.

When the actual lottery occurred, the build from the last pick to the top 3 was everything I imagined and more. The cheers grew louder and louder with every successive pick. When the 10th pick was read out "Sixers", everyone erupted. Step 1, attaining the Pelicans 10th pick in the draft, was complete. The build up to the top 3 was even better. When the 4th pick came out as Magic, another huge roar erupted.

Once the top 3 pick was guaranteed and it went to commercial, the place was absolutely buzzing.

And then it happened. As if Devin Harris buried another off-balanced, mid-court, walk-off heave, the buzz in the room was gone as the Sixers drew the 3rd pick. At the time, it was disappointing not getting that #1 when they were so close. The groans continued when YET AGAIN Cleveland rode away with the top spot, cementing their spot as draft capital of the world (Johnny Football says Hi).

But yeah. We're pretty crazy. We're cheering ping pong balls, literally. Up to 200 people came together to cheer over ping pong balls because a few guys tweeted about it. And that is just amazing. If the small hope that this franchise has finally given us was able to create this much excitement, imagine what happens when the team is finally contending. 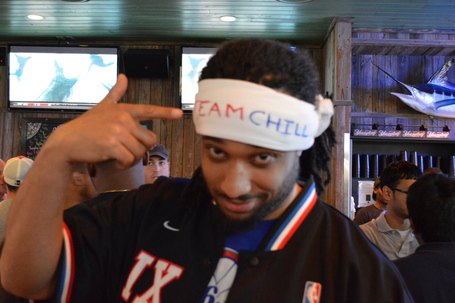 For those who attended the event or supported it from afar, the Liberty Ballers crew and Spike Eskin would like to extend a big thank you. I know personally that I joined this community a few years ago because I loved basketball and the Sixers and had a fun time discussing them with other like-minded folk. Seeing the evolution of this community has been great and this was the top of the mountain for us so far.

Some of you had your own parties and whatnot around the country. Post pictures if you got em. And give us your top moments from the party if you were there. Once again, thanks a lot. Now, we wait until June 26th.