Arnett Moultrie, Kwame Brown, and the Last Vestiges of the Doug Collins and Rod Thorn Era

Share All sharing options for: Arnett Moultrie, Kwame Brown, and the Last Vestiges of the Doug Collins and Rod Thorn Era

Then Sam Hinkie came in and wiped out all the world. And it was good.

I'm not super well-versed in the ol' King James, but I'm pretty sure the above quote can be found somewhere in Ecclesiastes.

Though we certainly don't need another reminder that Sam Hinkie is the new Khal after savagely murdering and cutting off the braids of Rod Thorn and Doug Collins, Sixers Media Day gave us some more hints. Arnett Moultrie, he of the never-healing bum ankle, is out until at least January after surgery. Kwame Brown, he of the Candy Eating Fan Club of Greater Northeast Philadelphia, has a strained left hamstring after almost moving too fast this offseason.

And though there are certainly lingering dingleberries (namely Evan Turner)  from the merciless tenures of Rod Thorn and Doug Collins, these two tall gentlemen are the ones I'll most closely associate with those years.

Moultrie's constant out-of-shape-ness doesn't jive with Brett Brown's insistence upon nutrition and getting fit. He's a poor defender, an inconsistent shooter, nearly worthless with the ball in his hands, lackluster on the defensive glass, and pretty clueless as to where he should put himself on the basketball court at all times. The good things you can say about him (Speightsian athleticism, actually plus offensive rebounding, the ability to set a screen better than the Kate Moss doppelgangers on last year's Sixers) don't redeem the bad ones. Sure, he can get better. But he likely doesn't give a shit about that.

After trading a future first (though their impressive badness will turn that into two second's) for the rights to take him with the 27th (!) pick in a weak draft, the masterful Doug Collins spent a year berating the prized rookie who he said was in the top 10 on his draft board, and playing him in garbage time. 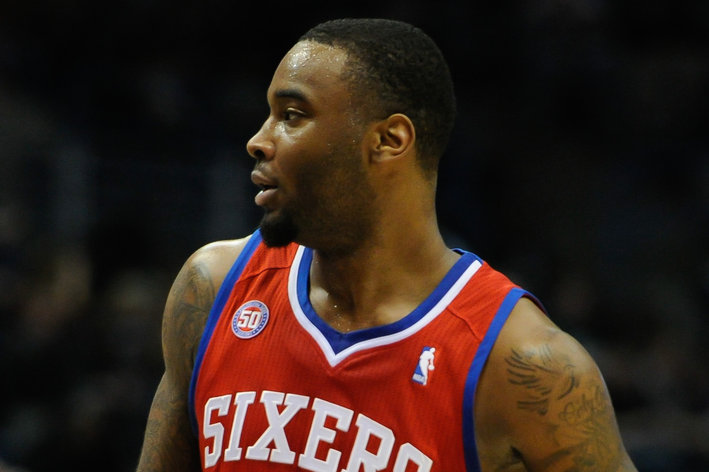 Last year was the best.

And now he'll come back in 2014 two years into a disappointing career on a team that doesn't particularly care about him. He's a footnote as just another reason why it's good that the Sixers are bad. Because the people who used to make decisions for the Sixers thought this guy was worth a future first round pick. He'll be gone within a year.

Not to exclusively condemn the former regime's ability to assess young talent, we have former Doug Collins first overall pick out with what they're saying is a "strained being old and bad forever." As we've been doing for over a year now, I'd like to remind you that Doug Collins, in all of his wisdom, wanted to give him four years. Never has there been a more ignorant thought ever thought. They gave him two years instead -- second-most ignorant, then.

The Sixers are going to lose more than 60 games this season, and I've never been more fucking confident in the direction of this team in my life.