David Stern Hopes That The 76ers Make The Playoffs This Season

Don't use the word "tanking" around NBA Commissioner David Stern: He hopes that the Philadelphia 76ers make the playoffs this season. Whether he actually believes that they can is a different story.

Share All sharing options for: David Stern Hopes That The 76ers Make The Playoffs This Season

All things considered, it was little more than a throwaway line. But when NBA Commissioner David Stern was asked earlier this week at the Beyond Sport Summit about the Philadelphia 76ers' odds of winning the 2014 lottery, it was clear that he doesn't endorse the "Winless for Wiggins" movement.

He's right, of course. Even if the Sixers finish with the worst record in the NBA next year, there's a 75 percent chance that may might not land the top selection in the 2014 draft. In fact, there's a 35.7 percent possibility that the 76ers wouldn't end up with any of the first three picks.

And in his heart of hearts, Stern probably is rooting for the Sixers to be good this year. No commissioner of any sports league wants one of his member teams to be horrendous, even if said commissioner is less than five months away from retirement.

That said, Stern can hope for a great things all he wants, but the reality is that the 76ers and new head coach Brett Brown will struggle to win 25 games this season.

Stern's comment wasn't the only Sixers-related story to come out of the Beyond Sport Summit. A day after leading conference attendees in a game of Simon Says, Sixers' CEO Scott O'Neil took part in a panel that discussed how sports teams can lead the charge toward sustainability. 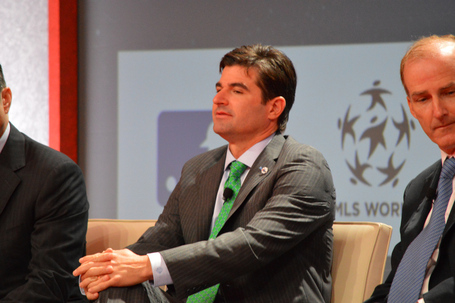 This season, the 76ers will participate in the NBA's "Trees for Threes" program: A tree will be planted for every three-pointer that the team makes during the 2013-14 campaign. In addition, O'Neil noted that the Sixers are in the process of building a new practice facility at the Philadelphia Navy Yard that will be LEED-certified.

"We have this obligation to take this wonderful platform we have and use it for a greater good," said O'Neil.

While the Sixers may be champions for environmental change off of the court, they won't do much winning on the hardwood this season. But at least they'll have Commissioner Stern rooting for them.

Next Up In NBA