Also: adidas Nations is really awesome. More on that later.

Satiating my summer basketball appetite, I had the fortune of covering adidas Nations, an annual grassroots basketball camp that gathers in the LA area, for SB Nation this past weekend. While there was a surplus of prep and college talent on hand from the United States and all over the world, I had been passing by a number of NBA Scout badgewearers when I realized there was a half-decent shot there'd be a Sixers scout here as well.

A cursory look down at the handsomely embossed briefcase of the tall gentleman to my left proved me correct. This was Mike VandeGarde, an Austin, TX based college scout for the Sixers for over a decade and former Illinois State star big man. Upon introducing myself and preparing for the "OH GOD LIBERTY BALLERS GET AWAY" pepper spray that happily never came, Mike and I talked Sixers, Salt Lick BBQ, and more Sixers for about 45 minutes while watching two tournament games in front of us.

Mike couldn't have been any more helpful and willing to answer the flurry of questions that was snowing out of my mouth ad infinitum. I'll tell you what I can tell you.

-- There's a lot up in the air at the moment, as you know. But what's not being talked about as much as INTERN COACH is Sam Hinkie's lack of an assistant GM and whether or not he'll bring in his own new team of scouts. Less than two months away from training camp and, as VandeGarde said to me: "Sam's got a lot on his plate, but scouting is as important as ever." In the meantime, VandeGarde was just back from scouting in Prague and adidas Nations was "an opportunity to see high school kids you never get to see." But he and I watched the college guys as the prep prospects played further down the gym -- "These are the guys that matter right now. These guys are coming out next year and we need to know everything we can about them."

An Oral Pre-History of the 2013-14 Philadelphia 76ers, Featuring Derrick Coleman and Lots and Lots of Losing 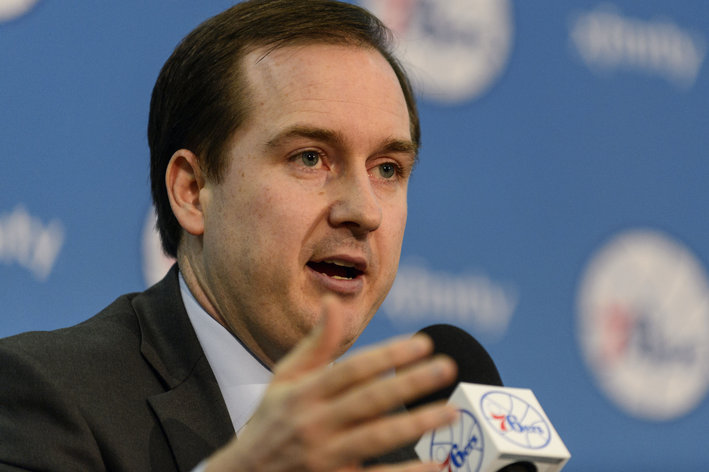 O'Connor digs deep into the offseason for this one.

-- There's a lot you can say about the Sixers organizational state of disarray since Allen Iverson and four guys from your neighborhood lost to the Lakers in 2001. What you can't say is that they haven't drafted well. Ten of their last eleven first round picks (minus Rodney Carney) have been legitimate rotation players.

VandeGarde attributes that success to the stability and trust the Sixers scouting department has with each other. Under guys like Courtney Witte, Tony DiLeo (as well as his brother Frank), and Jordan Cohn, there's been a lot of collective agreement over the past decade. And when you consider that only two of those eleven players were selected in the Top 10 -- Andre Iguodala and Evan Turner -- it becomes immediately evident how the Sixers have ran on the 8th-seed treadmill for so long. If you don't string together a few top picks and strike gold, it's almost impossible to move one way or the other when you're drafting solid guys.

That's something the team is aware of.

-- Having been in the War Room for a long while, VandeGarde has keen insight into the Sixers thought process. "You look for guys that could change the franchise for the better. We're looking to draft young guys with super high upside."

-- According to VandeGarde, everybody was excited and on board with the Bynum trade, though he was pushing really hard to hold onto one of Moe Harkless or Nikola Vucevic, both of whom he is very high on. "But considering what happened with Bynum, we're in a great situation as a franchise."

-- The two players over the past few years that have made his jaw drop the most... will surprise you. And you'll think I'm making it up because of how closely it reflects my own thoughts. You'll just have to take my word for it -- Andre Drummond and Anthony Bennett.

-- He's optimistic about Evan Turner becoming a solid NBA player. The idea that a new system could help unlock a few elements of his game is one he believes in. Emphasized how good of a rebounder he is for his position.

-- I asked him about the distinct lack of Euro draftees over the past decade or so and he said it wasn't really a conscious decision. "We have Euro scouts we trust, and we've had Euro guys on the board, it just didn't work out." Had Michael Carter-Williams not fallen to them, there were a number of foreign prospects they were looking at for that spot.

-- Having been based out of Texas while Hinkie was in Houston, Mike and Sam had a relationship prior to Sam's hiring here. "Sam's always played things closed to the chest." That definitely tracks. Mike loved the James Harden trade and lamented that, had things gone a different way, the Sixers could have been in a position to acquire Harden themselves.

-- VandeGarde's super high on Nerlens Noel, echoing Sam's sentiments about rim protectors being at a premium. It's been a long time since a big man as athletic Noel has been with the Sixers. Once Noel gets his knee right, he's excited about all the blocking and dunking that's to come. Believes that other teams were scared off by the knee and that's why they passed. Also: "Sometimes teams get locked into a guy they fell in love with and that's how other guys start to slip." Seems like that was the case for the McLemore and McCollum picks.

"Considering what happened with Bynum, we're in a great situation as a franchise." -Mike VandeGarde, Sixers college scout

-- Regarding the jump shot of a certain MCW: "There's hope for everybody in terms of a jumper. His rotation and his form are okay. Look at what Iguodala has become -- he had much worse rotation coming into the league. With time, consistency, effort, and work ethic, there's definitely hope for his shot." They also looked back at his high school tape and saw that he shot well enough to believe his is far from a lost cause.

Overall, I got the sense from Mike that while there's still a lot of work to be done, the organization is on the right track. "But it's not like you have a 10-year contract. You gotta make good decisions every day." And that's what it's ultimately about -- whether you're a scout or a GM, one decision can set you back a lot of years. The Sixers have had a few of those in the last decade. With the new regime hell-bent on taking its time to make the best choices and two likely lottery picks in their pocket, the future is bright indeed.

We talked for a while, so there's obviously things I left out. But if you have questions, I'll try to answer the ones I can.