Also, they become the Magic.

The Sixers have a coach now, which means they'll be good this year! Or wait, is that not how it works? The ESPN NBA panel of 215 writers don't think so -- in the first entry in their 2013 NBA Summer Forecast, they have the Sixers pegged at the bottom of the stumpy Eastern Conference with a 20-62 record.

That, if you ask us, is quite generous. We'll have our own series of predictions when the roster becomes more concrete, but at the moment, 20 wins with this roster would seem like a feat. There's a good chance nobody hits a jumper until January.

The Western Conference predictions don't come out until tomorrow, but the only real competitor in the tanking rankings out there is Phoenix. So with ESPN dropping the Sixers below Boston (29-53, which is hysterically low for their current roster), Charlotte (26-56), and Orlando (24-58), the consensus is, we can surmise, a very high chance at getting the top pick in the Draft. Is it June yet?

Another fun nugget of negligence that I'm going to pretend is insulting, comes from whoever posted the Sixers bit of this article without proofing it. Though it's been updated since I pointed it out on Twitter, this tickles me for Vucevician and Harklessish reasons. 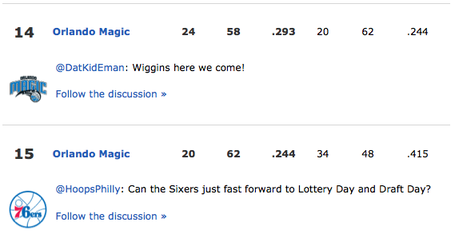