In this edition of the Sunday Morning Shootaround, the Jrue Holiday limousine saga continues, Royce White expresses his love for Dragon Ball Z, and the word "catfish" takes on an entirely new meaning.

I realize that Nick Young is no longer a member of the Sixers (and therefore, ineligible for inclusion in the SMS barring an exemption), but this picture was too good to pass up. And by "good", I mean "horrible."

(Note: I realize that the girl who drew this is about 13 years old. But as George Thorogood once sang, "that don't confront me.")

As a terrible artist, I'm well within my rights to criticize other terrible artists. I earned the hell out of the grades that I got in middle school Art class: I'm fully convinced that those Ds stood for "Damn... this kid can't draw."

I was (and continue to be) OK with the fact that I am useless with a pencil in my hand (unless I'm using said device to play "pencils"). Hopefully, Beauty_B can find solace in the fact that Rob Liefeld was an atrocious artist, yet he made a killing off of New Mutants, X-Force and Youngblood.

Death to A2A limousine for not giving Jrue a refund for the limo breaking down at his wedding that me and @mindofai9 missed because of it.

As we discussed in last week's edition of the Sunday Morning Shootaround, the limousine that Evan Turner and Andre Iguodala were in last weekend "caught smoke", causing them to miss the wedding of Jrue Holiday.

As a result, Turner (as well as Holiday) took to Twitter to fire shots at A2A Limo, but there's PLENTY of blame to go around on this one...

A2A Limo: They obviously had no idea that their limo was going to break down that day, but they compounded the problem by not immediately refunding Holiday's money. To any business owners out there reading this: If you EVER have a dispute with a customer where you're clearly in the wrong (especially if the customer has a fair amount of influence over others), do everything in your power to make it right. That's just common sense.

Jrue Holiday: I love Jrue, but there are times where I question his decision-making ability. This is one of those times.

First of all, the A2A Limo website is hideous. All of the photos of limousines, party-goers and customer service representatives are straight from of the "1,000,000+ Royalty-Free Images" CD that my mother got when she bought Corel Draw 5 in 1995.

But the fun really starts when you click on the link that they've provided for Yelp reviews. It doesn't take long to figure out that the reviews they've posted on their site appear to be fake - a quick Yelp search returns two, sparkling one-star reviews for A2A Limo.

You have to be smarter than that, Jrue: Personally, I don't mess with any place that gets less than 3.5 stars on Yelp. And I definitely wouldn't rent from a company that doesn't have its address listed anywhere on the site.

Most importantly, if you're going to strand any of your former teammates on the side of the road, make sure that it's Spencer Hawes next time. 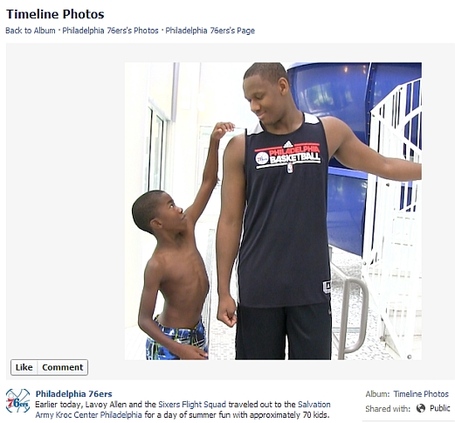 Here it is, folks: The first annual Liberty Ballers Summer Photo Caption Contest (sponsored by the Vegas Summer League)! The person who submits the best caption will receive all of the leftover slot machine receipts that Levin brings back from Sin City. Here are a few suggestions to get you started:

"Lavoy! How come you're so tall yet you get pushed around all of the time on the low block?"

"How tall do you think Stacey Dash is? About this tall?"

"Don't worry, Mr. Allen: No matter what, no one will accuse you of tanking next year. We aren't expecting a whole lot out of you anyway."

If you don't get this... you probably don't get me. #DBZ http://t.co/njaIduOvmH

If you hit the link in the tweet above, it'll take you to Royce White's Instagram feed where he posted a picture of the Season 9 box set of Dragon Ball Z. (Note: I would have included a screencap of the photo, but we're technically not allowed to do so. Once again, the lawyers of America don't want us to have any fun).

I've only seen bits and pieces of the first two seasons of the Dragon Ball Z saga, but it's generally recognized as one of the greatest anime series of all-time. This post calls for a list of great Japanime shows, but I just realized that I haven't seen all that many in my lifetime.

Ronin Warriors and Cowboy Bebop are pretty good, as is Voltron (which was a heavily edited version of Japan's "Beast King GoLion"). But one of the greatest animated series of all-time - Transformers - doesn't qualify since it was written and developed primarily for American audiences.

Was Grown Ups 2 any good?

The people on @CatfishMTV never, ever cease to amaze me.

First, a brief explanation for those of you who are unfamiliar with the movie and/or MTV show...

In Internet lingo, a "catfish" is a person who creates a fake persona that is more appealing than his or her true self. This is done, of course, with the goal of convincing others to fall in love with them. Ultimately, the "catfish" meets his or her intended, who is (naturally) disappointed in the fact that they've been hoodwinked, bamboozled and led astray for weeks and months on end.

How does this apply to Liberty Ballers, you ask? Just read every article that we've ever written on Andrew Bynum in chronological order. Then you'll understand.