The Andrew Bynum Era: Impossible to Forget, Hard to Remember

Yesterday, Andrew Bynum signed with the Cleveland Cavaliers, thus ending his "tenure" with the Philadelphia 76ers.

Share All sharing options for: The Andrew Bynum Era: Impossible to Forget, Hard to Remember

Gone. It's so finite. Andrew Bynum is gone.

Some will undoubtedly argue that Bynum was never really in Philadelphia to begin with, so he's gone in the same way that a four-day work week and healthy binge-eating are gone. I would disagree. Andrew Bynum was definitely here. And he most definitely made his mark on the Sixers without ever playing a minute for them.

Now he's signed with someone else. Cleveland gets to feel the same creeping optimism we felt on that afternoon in August. He's their well-if-he's-healthy... prize now. They get the Bynum updates. They get the hair. They may get to see him play. I've already spilled my guts on Bynum on the last day of the regular season. 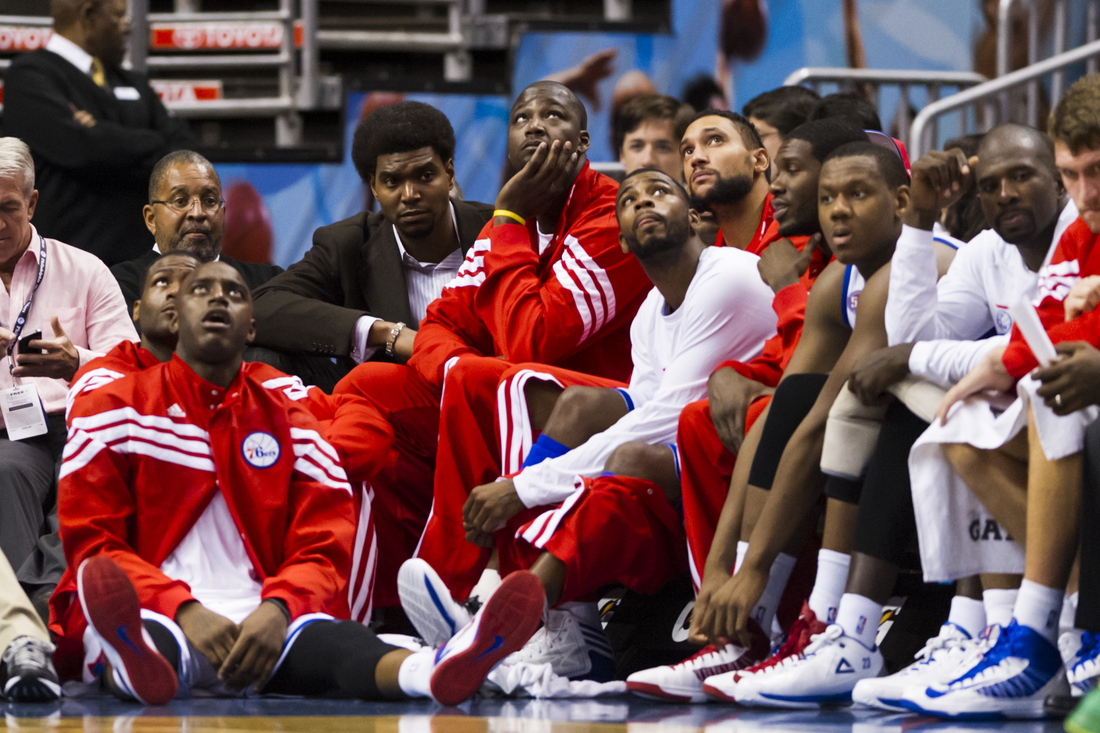 Those sad, sad Sixers of three months ago.

And for the first time in quite a while, I'm bitter. Not towards Bynum -- he did what he had to do, which is get paid and not work out for teams because he's simply not in any shape to do so -- but the situation. He was ours. We lived through the Andrew Bynum Era like local residents in a tropical storm. And aside from Jason Richardson's two injured years left on his contract, we have nothing to show for it. People are talking about Orlando winning that trade. That's not how it was supposed to go.

But from death, I remind myself in an endless dialogue to maintain sanity, comes rebirth. And the Sixers' phoenix rose in the form of an ownership hell-bent on long-term success.

Without an injured Andrew Bynum, there's no Sam Hinkie. Doug Collins would probably still be coaching this team into the ground. If Bynum had played 40 games, maybe they max him out only to find his arthritis next offseason and he sits for the better part of four years while Doug barters for more money and years to keep Kwame Brown on his bench. There's no Nerlens Noel or Michael Carter-Williams or the two likely lottery picks in the loaded 2014 Draft.

We're gonna come back stronger from this. It's comforting to know that there will never again be a season as torturous as this one. -Three months ago.

In an decade where Mediocracy defined the Sixers and refused to relinquish its choke hold, it took Andrew Bynum missing 82 games to get them to a better place. Sure, that 40 games would've felt tremendous at the time, but looking back? We lucked out big time. Phoenix tears have tremendous healing powers.

Thank you, Andrew. Good luck in Cleveland. I really do hope you can miraculously regrow cartilage in your knees. I want you to play. Give us a call sometime. We're doing just fine.