Everyone and their mother has adopted this Mt. Rushmore trend. Bleeding Green Nation has like 18 threads going at the moment trying to figure out which four faces get turned to stone for the tenures of Mssrs. Reid, Rhodes, Ryan, Kotite. And while it'd be ridiculously easy to do the Sixers Rushmore in the past 20 or so years (Iverson, Barros, MacCulloch, 'Spoon), we feel it'd be more fitting to make a Mount Bustmore for our dear, terrible Sixers in recent memory.

Though the Sixers are the [MEANINGLESS INTERVAL] winningest franchise in NBA History, they've endured just as many busts as any other team. Somewhere, there are Hall of Fame-esque busts of the players that dropped the ball again -- and again and again -- for the Sixers. Mike Mamula probably found his way on there somehow.

So I present to you, with a digital assist from the always fantastic andyreidswaistline (@PhilaticalArt), the official MOUNT BUSTMORE of Sixers in the modern era, AKA most of our lifetimes: 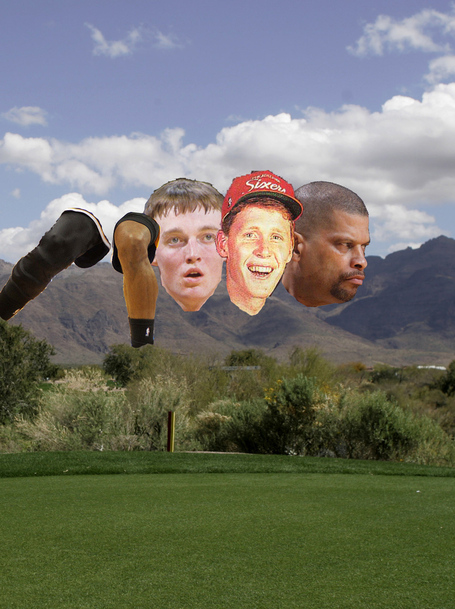 A beautiful sight located off a golf course somewhere. A land filled with busts and immaculately cut grass.

You'll find out in this week's LB pubic* email thread that the granite participants were hotly debated. I myself am surprised Willie Green and Scott Williams didn't make the mountain. You know I wanted to put Lou Williams on there. Chris Webber probably deserves it too. Not Evan Turner, dweeb.

Soon, motorcyclists everywhere will be dropping their families off at Mt. Bustmore while they go have affairs with that one topless biker chick at their hogfest. Think of the tourism!

Let us know who you think we missed or if we just need to cut in a few more heads. I got a rock guy.