The Bees Knees: Nerlens Noel is not Andrew Bynum

Philadelphia taxes this year will demand you sacrifice the knees of your first born.

Share All sharing options for: The Bees Knees: Nerlens Noel is not Andrew Bynum

If a small part of you is squeamish at the idea of resting our hopes and dreams at the feet of another 7-foot big man with knee problems, I won't blame you. But Nerlens Noel, he of the torn ACL, is not Andrew Bynum. The chronic arthritis in Bynum's knee(s) will never allow him to play without pain. Noel's ACL will heal and he will play.

But I do get the concern. There's a karmic bear we're poking by drafting Nerlens and asking him to play for the Sixers. It's like a game of Don't Wake Daddy with the Injury Gods and 7-foot person hands. For some non-metaphors, here's Eliot Shorr-Parks on injury differences:

Bynum's knee problem was chronic and was out of control of any doctor. Bynum will have to deal with the problem the remainder of his career, while Noel's recovery is much more cut and dry. Returning from a torn ACL is never easy, but it is not the death threat to a career it used to be. Factor in that Noel is 19- and not 25 with years of NBA mileage on him like Bynum- and the prognosis on Noel is night and day from the grim situation the Sixers got into with Bynum last year.

A friend texted me saying he didn't like the Noel pick because big men with knee injuries scare him. Well, then you may want to consider running a 5-guard lineup. Every big man in the NBA has knee issues. It's inevitable for tall people that play basketball. There's so much banging and stomping and positioning involved that affects the bigger guys than the smaller ones.

Am I worried about Noel? Sure. I've got a Helga Pataki-esque shrine to the Knee Injury Gods in my closet with hair and bubble gum and my own knee blood coating it. As Spike Eskin and I talked about in a podcast yesterday, the Sixers are going to tell Nerlens to take his time. There is quite literally no rush. Player development (PC for "Tanking") is the name of the game next year. Hinkie won't want Noel to push it until he is beyond ready. If that's Christmas? If that's the trade deadline? If that's 2014? No worries, kid. Do you.

Sam Hinkie and The Long Game 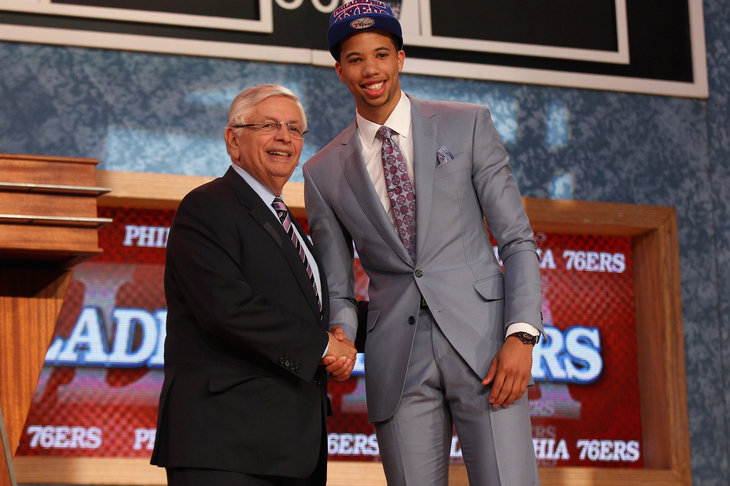 Rich Hofmann on Hinkie's patience and the Sixers' future.

Noel's going to work his ass off to get healthy. He's a hard worker. He's a guy who wants it. He is best friends with Michael Carter-Williams. Where there were concerns (some unfounded) about Andrew's will to win and desire to get back, there's none of that with Noel.

They're different players. Noel will never be the offensive force Bynum was and could be again. Bynum can't impact the game defensively the way Noel can. They're both gigantic humans with tremendous ability, but not much of it overlaps except for their knee issues.

And, of course, the fact that Nerlens Noel will be a Sixer for years to come. Andrew Bynum will not.