Sam Hinkie and The Long Game

Share All sharing options for: Sam Hinkie and The Long Game

By now, you know what happened, but I'll recap it all in bullet points. Those two words, "bullet points," now form a double entendre after considering what Sam Hinkie did to the Philadelphia 76ers we all knew, in one night. These new Sixers, as follows:

Since being tabbed as President of Basketball Operations and General Manager in mid-May, Hinkie has frustrated both fans and reporters (justifiably, in this case; their jobs rely on getting information, after all) with his personal brand of "radio silence" (credit John Gonzalez, who has used that term a lot). The draft workouts have been secretive. The organization went completely mum on the coaching search. Add everything up, and there was no clue as to which direction Hinkie would take the franchise.

Well, unless in the case of Kevin Garnett, actions speak louder than words. Hinkie is blowing this bad boy up. With the trade of Holiday, the team's best asset, it's clear that the new President and GM deems every player he inherited as expendable. Ironically, Hinkie's first official night making personnel decisions contained more action than The Expendables. 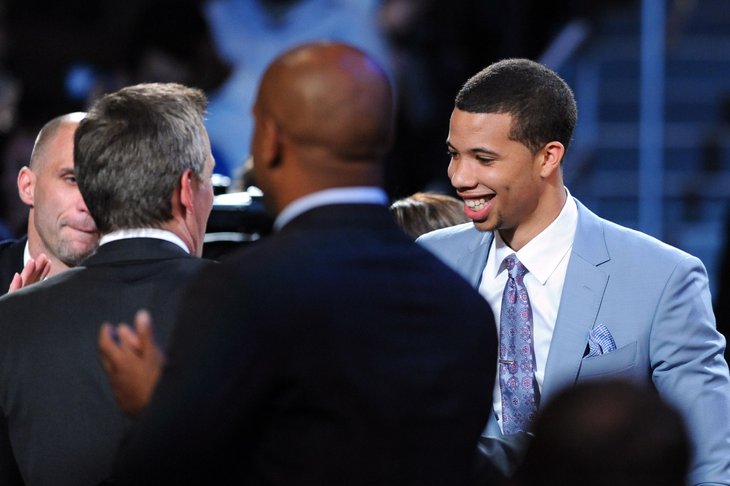 So what exactly did Sam Hinkie do last night?

So much had to happen for the major trade to even be a possibility; Anthony Bennett being selected first overall and Cody Zeller going at four to Charlotte top the list. When Noel, a prospect who many experts figured wouldn't fall lower than number two overall, fell to New Orleans, Hinkie moved quickly. The Sixers' new decision maker decided to go all-in like he was playing Texas hold 'em against Teddy KGB, jettisoning Holiday* to The Big Easy. That was that.

*A quick word about Holiday, because Baumann is going to have something longer and much more eloquent: Ever since he fell out of the lottery and into the Sixers' lap in 2009, Holiday has performed well through relatively tough circumstances: Eddie Jordan's reticence to play him as a rookie, Doug Collins' "share the wealth" offense, and a severe lack of talent surrounding him this season are immediately what comes to mind. Despite all of these particulars, Holiday managed to become an All-Star in his fourth season. He was a pleasure to watch, and a model teammate. I wish him all the best in New Orleans, and of course, will still be watching closely.

All that said, in terms of building a championship roster, what is Holiday? Sure, he was an All-Star this year, a distinction he absolutely earned, albeit in an Eastern Conference watered down by injury. At the loaded point guard position, is he elite? Very good? Some other extremely vague term? I don't know, but a 2013 second half where his shooting numbers (and frankly, overall play) dropped precipitously needs to be taken into account. Don't get me wrong, as Holiday is still a valuable piece for any franchise to have. He's just not the valuable piece.

In return, the Sixers will get another potential valuable piece in Noel. With NBA offenses becoming smarter and smarter in how they go about trying to score, rim protection is at an absolute premium. Noel has a chance to provide elite interior defense. The combination of blocked shots, assertive rotations, strong pick-and roll-defense, and solid defensive rebounding is potentially in play with this guy. Of course, we won't get to see Noel right away because of the torn ACL that he suffered in February of his freshman season. Outside of Phoenix and their amazing training staff, this was the best situation in which he could've landed. Sam Hinkie is in no rush.

Next season, the Sixers will most likely be an amazingly bad basketball team. In fact, I've heard a few 9-73 jokes already, with more undoubtedly to come. But from all accounts, next year is the year that teams should want to be tremendously bad. There's a phenomenal freshman class entering college this upcoming season, led by Canadian wing Andrew Wiggins, who will play at The University of Kansas. With the Sixers not concerned about trying to win right away, Noel will receive all the rehab time that is necessary for him to recover back to full strength. Then he'll learn the NBA ropes in a relatively pressure-free environment, at least internally.

Carter-Williams, a high-upside playmaker with a poor jumper, will probably be thrown into the proverbial fire right away. This is a good thing. During his sophomore year at Syracuse, Carter-Williams had complete control over the offense, and he'll potentially have the same level of responsibility in the pros under a coach with a player development background in Brown (Though again, Brown's hiring was denied by Hinkie). Out of the team's control, New Orleans will probably push for a playoff spot in the strong Western Conference, so the Sixers will most likely have an additional first rounder in what is supposedly a strong draft.

Sure, the Sixers are going to be bad next season, but Sam Hinkie doesn't seem all too worried about next season. Now go watch him sign Andrew Bynum. That can't happen, right? Right?