Drafting Cody Zeller would not be disastrous

All the Zellers, please.

Share All sharing options for: Drafting Cody Zeller would not be disastrous

I don't want the Sixers to draft Cody Zeller. But we'll get back to that in a second.

Last week, I went to a bar to watch Game Four of the Spurs/Heat series with my boy Patrick, who's also an assistant at HIMYM. A day later, we knew, the showrunners would decide if an extremely coveted promotion would go to me or someone else. As Pat and I watched Dwyane Wade de-age himself five years and carve up the Spurs defense, he spent the game getting me to accept the strong possibility that Jen would get the promotion and I have to handle myself like a pro if and when it happens. She's older, she's got a ton more experience, and she's generally seen as a more-serious person than I am. She also doesn't run a Sixers blog. All of these things, Pat said, were working against me. Plan for the worst, hope for the best.

Back to scene. Though we're frightened by the fact that everyone and their mother (and now some actually reliable sources we're hearing) thinks the Sixers will take Cody Zeller tomorrow night, it's not the worst possible outcome. Cody's a nice player who we'd like in the open court and on the foul line -- he'll be around a while -- he's just not the upside gamble I'm looking for out of the Sam Hinkie Era's beginning.

Zeller can help right away, which I don't really find important at all but at least could be gratifying off the bat. He'll be an able-bodied and athletic big man doing things that we didn't see last year. A second unit of Zeller and Arnett Moultrie is actually rather exciting if you can ignore the people starting ahead of them. My problem is not with Zeller, but with where the Sixers are as a franchise and how little Cody would move the needle. But he'll be a productive player and I'd welcome him to Philadelphia without too much grumbling.

So if he's not the nightmare, what is? 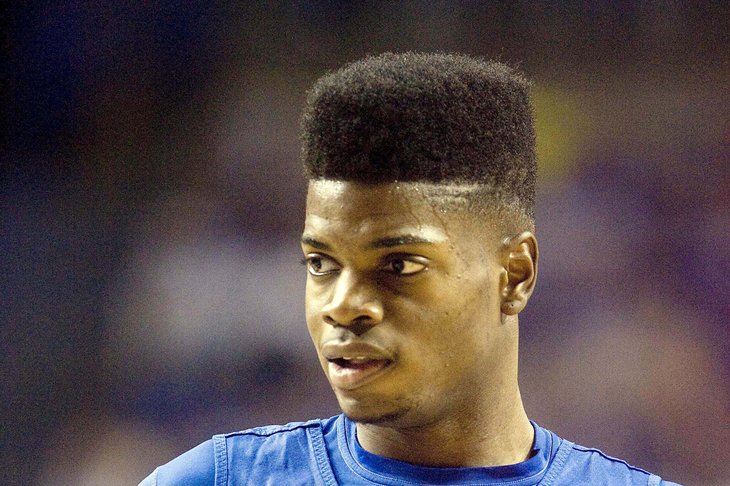 The LB writing staff pumps out their Top 15. So much variance.

Standing pat for all three picks (11, 35, 42) would be my worst nightmare, and that excites me. The absolute worst real-life thing the Sixers could do is Nothing. Nothing, in this instance, means something like Cody Zeller, Glen Rice, and Trevor Mbakwe. The fact that that is our floor is not bad. It's why I love the draft.

But at the same time! Man, I really need to see some moving and shaking. With all the rumors about teams trying to trade out of the first round, I'll be highly disappointed if the Sixers don't edge their way into another pick. I'd love it if they traded up, I'd adore it if they traded down (vintage Andy Reid), and I'd happily marry the gayest man near me if they bought a late first-rounder.

Just don't take your ball and go home, Hinkie. Play with the ball. The ball is good.

Zeller's not my top choice, obviously, but it's about assets. And a cheap, young, athletic big man certainly qualifies as an asset. It's not the end of the world of Cody Z is wearing these clothes (Roy thinks he dresses like me, though we do kind of look alike maybe) in red, white and blue. We'll see tomorrow night.

I got the promotion. Your move, Hinkie.