hi my name is mike have you heard the sixers need a big man a big man is what they need because height is important in basketball and when you're big basketball is easier and also shot blocking and rebounds and high things.

The best part of the NBA Draft is the end of Mock Draft season. The previous sentence is an abject lie, but this season's draft mocking has seemed especially tiresome, mostly due to the lack of innovation in our nation's guessing experts. You're just making things up, guys. If you're writing fan fiction, at least spice it up a bit.

The Sixers have, if you listen to these mocks, never interacted with a person shorter than 6'10. They are PERFECTLY SET in all areas except for Tall Guy. Thankfully, the NCAA has provided us with a buffet of nondescript tall men to satiate our appetite and bring a championship to Philadelphia ho-hum.

I will once again guarantee the Sixers will not simply take a center at #11 and take their ball and go home. Hinkie ain't even about that. But let's pretend like the Sixers have released anything (anything at all!) about who they like going into the draft and hold these mock drafts as some kind of half-truth.

Keep reading for my pretentious and overly dismissive takes on mock drafts around the webz.

Zeller is the fourth constant on this mock. He's appeared at this spot on all six versions. Why? The 76ers need size and athleticsm in their front court and Zeller provides both. I'm told Sergey Karasev, Kelly Olynyk and Mason Plumlee are options here but probably only if Zeller is off the board.

Sure, Fad. I'm sure that's just what you're hearing.

We only have love for DX and Givony (and Derek, natch), but I can't say I'm not a little upset with them going CHALK here.

Picking Adams will do Philadelphia no good next season. Everyone knows Adams is a project, one who will be best served spending all of next season in the D-League getting used to the speed of an NBA game. But his workouts have general managers drooling. "If he were as good as the sum of his parts, he would be in the mix for No. 1," an Eastern Conference executive said. Philadelphia needs a big man and new general manager Sam Hinkie, a disciple of Houston's Daryl Morey who has no ties to the previous regime -- and therefore no responsibility to make the team a contender next season -- could make a play for a high-risk/higher-reward big man.

He also has CJ McCollum falling all the way to 15, so I'll just be over here not trusting any of this.

They employ Spencer Hawes as their starter at this position. That's it. That's my argument or this pick. 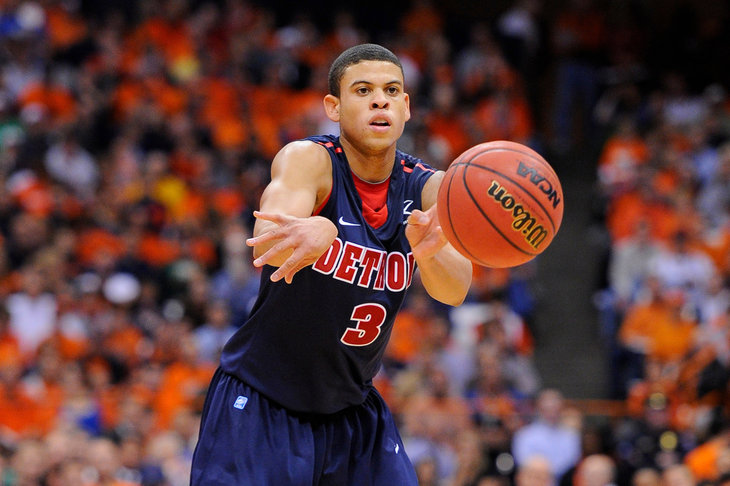 Get the lead out for your personal favorite sleeper in the draft. Jerel McNeal, anyone?

Love me some HP, but Matt Blatt Auto Sales Splat Of The Game Moore subscribes to the NEED theory, which just feels patently useless with this organization as it stands.

The guess here is that new GM Sam Hinkie, with a stats-oriented background from Houston, will find Zeller more than solid enough to take here (his college PER of 29.8 last season was 14th in the country). Zeller's rehabbed himself after a poor NCAA tournament with some strong workouts, and his ability to run the floor and finish in transition would give All-Star Jrue Holiday some legit options when he wants to push the ball. Zeller isn't going to bang inside at the NBA level, but his face-up game is capable of being productive in the pros.

I gotta get this narcolepsy taken care of.

Well now I'm just laughing at Poopsworld. But really, Trey Burke falling to 13? What is this, Drugs Day?

Named for being discovered on land owned by FedEx near the Pittsburgh International Airport, the Fedexia looked similar to a salamander and is estimated to have been about two feet long. Plus, Wikipedia's picture for it shows the Fedexia in red and blue, which means there's a good chance the extinct lizard has been in 76ers colors more recently than Andrew Bynum.