NBA Draft: Sam Hinkie and Sixers Should Trade Down

Share All sharing options for: NBA Draft: Sam Hinkie and Sixers Should Trade Down

LeBron James. Tim Duncan. Dwyane Wade. Tony Parker. What do those guys have in common? A lot. But for our sake, the answer is they're not Sixers. With the NBA Draft just a few sleepless nights away, Sam Hinkie will be figuring out a way for the Sixers to acquire a superstar. He will likely be unsuccessful.

Why? The Sixers don't have that much to offer. They have the great misfortune of being a young, mediocre team without that many young, exciting prospects. Any list begins and ends with Jrue Holiday and Thaddeus Young. A more generous man would include Arnett Moultrie. I am not that man.

Hinkie wants to get this team to a place where he can pull off a James Harden-esque trade. They're not nearly there yet. Trading down to get more picks would be a big help. A few days ago, Brandon argued the Sixers should try to trade up. I'll use his same rationale to argue the opposite.

Absolutely. The talent gap between the Top 7 and the next 30 is extremely wide. When our Big Boards come out later this week, you'll see all the disparity among guys listed in the 10-35 range. If the Sixers love a few guys they feel would be available 5-10 picks later, trading down to nab a second round pick makes a lot of sense.

If the Sixers simply draft Cody Zeller or Kelly Olynyk or Rudy Gobert at 11 and go home, I'll eat my foot.

Sixers Should Trade Up on Thursday 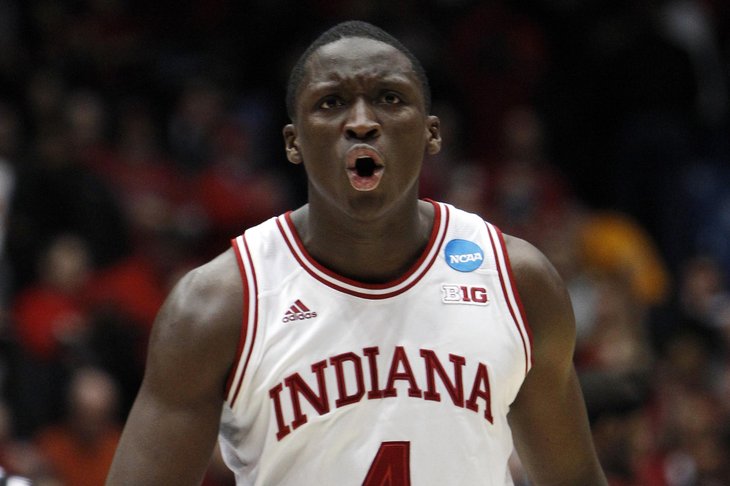 Brandon makes the case for going for broke and moving up at the Draft.

The longer you build up to something, the more public opinion sways. This has been universally seen as a bad draft. Then its badness was overrated and all of a sudden there are plenty of hidden gems in there.

Draft Time is the ultimate exercise in groupthink. Nobody knows anything, but if teams are now trying to outsmart the outsmarters by actually trading up, the Sixers should oblige them and reap the rewards later on.

3) What can the Sixers use to move down?

As erstwhile Fanposter Jake Pavorsky told us last month, Houston Sam Hinkie values a good second round pick. The Sixers currently have two. Give him another one or two, and the odds that the bench would be filled with hungry, young Chandler Parsonses grows exponentially.

They have roster spots to fill and Herbert Hill ain't walking through that door. If the Sixers can pick up a second or another first just to move down a bit, that's nothing to sneer at.

I'm big on picking up a 2nd next year. Even though that seems like a small reward, by the time next year rolls around, that 2nd rounder could be the difference in moving up on 2014 Draft Night. It's negligible now -- you can just hear an executive's shoulders shrugging at the opposition's request for NEXT year's 2nd rounder -- but that's another asset to put in Sam's pocket.

Ten spots down and two second rounders seems like a pretty penny if the Sixers love Tony Mitchell or Allen Crabbe or Reggie Bullock and would've reached for them at 11 anyhow. There's also a deal with Cleveland to be had -- they've got #19, #31, and #33. I'd look out for that one.

There's something about having two picks in a row. Like you're selecting guys for an arranged marriage. You don't have to worry about taking a wing now and hoping a big stays on the board. You can take the two guys of any position you want and bang them together like similarly-proportioned action figures.

It's the dream. Gimme Giannis Adetokunbo and Dennis Schroeder over Cody Zeller and Nate Wolters any day. Then hope Archie Goodwin falls - WHAT UP.

I figured I'd include a trade where players are involved for the sake of mixing it up. This one has the Sixers taking on another year of salary on a guy who Rich reminded me rode the bench in favor of Sam Young in the playoffs weeks ago. I still like the transitional excitement in Green's game, but this is more about the pick. It's worth eating a year -- what's a year! -- of salary for the opportunity to gamble on Rudy Gobert or Lucas Nogueira.

I think Indiana does this to clear cap space this year and beyond while bolstering their frontcourt depth for another run at a title this year.

Plenty of options. As long as they don't stick at 11, I'm a happy boy. Draft time, kids. Come out, come out wherever you are.