In this special Father's Day edition of the Sunday Morning Shootaround, the Sixers are looking for someone who can turn tricks, Nick Young hangs out at an awards show, and we take a look back at one of the greatest regional networks of all time.

Calling all dunkers, gymnasts, and trickers! It's time to squad up for 2013-14 Open Auditions! Details: http://t.co/Xz0EWk4ZDe

2) The page that the link takes you to says that the Sixers are looking for people who have experience in "gymnastics, acrobatics, tricking and basketball." Not just one or two of these things, but ALL FOUR. Because I'm sure that's common.

3) Hold up... tricking??? Couldn't they have found a better word for that? "Arrested Development" (the TV show, not the music group) taught us that "a trick is something that a whore does for money" - I'm sure that's not what the Sixers are looking for. Then again, they do have attendance issues...

4) They ask for both a head shot and a full body shot on the application. So not only do you have to turn tricks, but you have to look good as well. I smell a discrimination suit.

After the recent release of Vine on the Android platform, I'd thought that we'd see some better quality videos come from the service. I was wrong.

And if that wasn't pointless enough, there's this. Oh... and this. 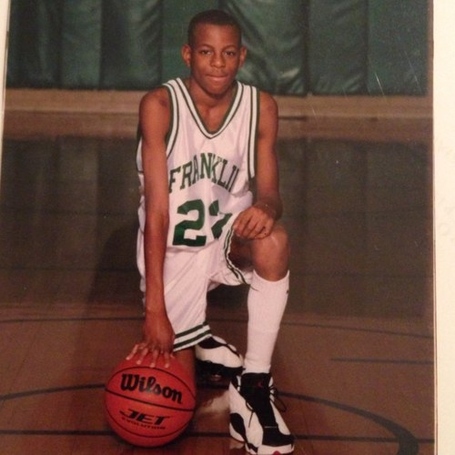 Here's Andre Iguodala's new Twitter avatar: A picture of him back from his days at Franklin Fine Arts school in Chicago (be sure to note that he's wearing what appears to be a pair of Air Jordan 13s - I'll defer to Tanner for confirmation of that).

If you were expecting snark, I apologize. There really isn't anything bad to say about the picture - hell... it's far less incriminating than this. Or this. And it's definitely better than this.

Besides, if I did bring up something negative, Dre would probably throw a drink in my face.

I'm sure there was a valid reason for Nick Young to be at the Spike TV Guys' Choice Awards, but I'm more interested in the actual honors themselves. Here are a few choice selections from this year's show:

I guess this award is for someone who is a skilled artist, and Foxx clearly fits the bill. Not only did he have a commendable performance in "Django Unchained" last year, but he's probably the best actor in the upcoming "White House Down" (though I don't know if that's much of an accomplishment). And let's not forget: This is the same man who once played both Ray Charles ("Ray") and Wanda from "In Living Color."

Most Manticipated Movie: Man of Steel

Really? I must be out of touch, because there are three movies I'm looking forward to more than that ("The Wolverine", "World War Z", "Elysium"). In the least manticipated movie category, "One Direction: This Is Us" was a runaway winner.

Again... I'm a bit lost on this one, but I will admit that this video of Kimmel in Robin Thicke's "Blurred Lines" is golden.

You may not remember the name, but he happens to be the only man who has executed a sky dive FROM SPACE.

I'm not sure what the point of the feat was, but it's safe to say that no one had a better eight minute and eight second stretch over the past 12 months. Well... maybe Levin did when he learned about the Sam Hinkie hiring while suffering the effects of a contact high at the Bottle Rock Music Festival.

@marczumoff were you ever involved in secret government surveillance in the 80's? #PRISM

I can't lie: The only PRISM that I fully understand is the former Philly-based television network that ceased operations in 1997.

A quick primer: PRISM was a premium channel whose sole purpose was to broadcast Sixers, Flyers and Phillies games. So, in essence, it was a lot like Comcast SportsNet, but it cost something like $12/month (but at least you got two free Phillies tickets when you subscribed!). SportsChannel Philadelphia came along later as the less-expensive, all-sports cousin of PRISM, and both networks were shut down in favor of Starz! and CSN Phillly.

Again, the ONLY reason to watch PRISM was for the games, and tens of thousands of people around the Delaware Valley would drop their subscriptions each year during the dead period between the Phillies' and Flyers' seasons.

When there weren't any games on, PRISM had a solid rotation of 17 movies that they would show throughout the day. And if you were lucky enough to be up at 3 in the morning on a Saturday, you just might be able to catch "Emmanuelle, Queen of the Desert" (or so I've heard).

One thing about PRISM, though... they had the BEST promos.