Sixers Coaching Search Update: Recapping the Search and Looking Around the League

One coach to rule them all, one GM to find him. The latest on the Sixers search for a new head coach.

Share All sharing options for: Sixers Coaching Search Update: Recapping the Search and Looking Around the League

It's been way too long since we last talked about the Sixers coaching search.

That's mostly because... well, there hasn't been a lot of news as far as candidates go. The only "news" we've seen is a mere tweet from Yahoo! reporter Adrian Wojnarowski:

There's a part of me that totally gets it. There shouldn't be a rush to hire a coach just for the sake of it. If it takes time to make the right decision, please, take all the time you need Mr. Hinkie. Get that front office structured. Whether it's jenga pieces, lincoln logs, legos, or whatever you're going to structure it with, get it done right.

There's another part of me that says COME ON SIXERS HIRE A COACH ALREADY. I'm so excited by the hiring of GM Sam Hinkie. I want to see him make his first move. I want to see a coaching hire I can get excited about. I just want some news!

So while we wait for the big decision*, let's recap what we know so far.

*I just know as soon as I finish writing this, I'll check Twitter and see a WOJBOMB telling me the Sixers have made a decision. Damn your timely reporting, Yahoo! Sports. I can live with a reverse jinx, though.

The Sixers have expressed interest in the following candidates in no particular order. (Click on the name for the related LB article):

Mike Malone (formerly of GSW) is crossed off because he was hired by the Sacramento Kings. He would have been an intriguing hire for the Sixers. I think that's a good hire for Sactown. Jeff Hornacek (Utah Jazz) was hired by the Phoenix Suns.

Brian Shaw remains one of the hottest names on the coaching market. He's been linked to a number of teams with coaching vacancies. We know that new GM Sam Hinkie (AKA GM Excel Spreadsheet) met with Shaw in Indy some time last week.

Quin Snyder was briefly mentioned as a Sixers target but there hasn't been much buzz about him since. 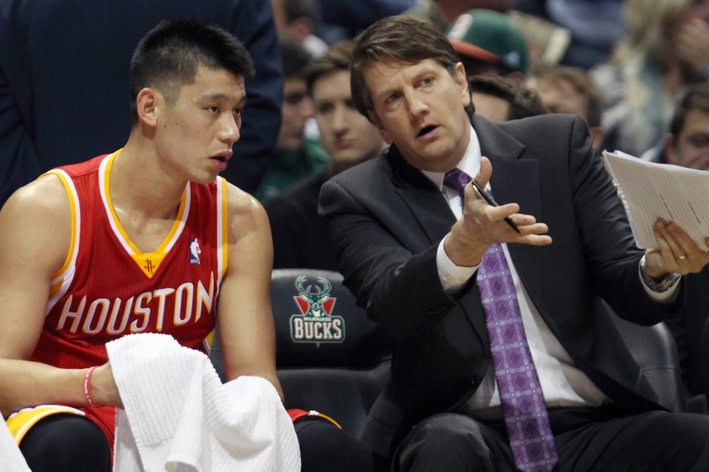 Hiring a Houston assistant would make sense for the Sixers.

The Houston Rocket assistants, Finch and Sampson, entered the discussion after Hinkie was hired. With Hinkie coming from Houston's front office, the connection there is obvious. I haven't seen too much buzz about Finch, who some believe is the heir to Kevin McHale in Houston, but Sampson has been the reported target of some other NBA teams with coaching vacancies.

Michael Curry is the holdover from the Doug Collins era. Curry is expected to have an interview for the Sixers job. The Bucks reportedly had interest in him, but Milwaukee just hired Larry Drew for the job. It's also worth mentioning that Curry will, per CSN Philly, "conduct the pre-draft workouts with potential draftees in the upcoming weeks".

The fact that some of these candidates were rumored targets prior to the Hinkie hiring has to be considered. Of available candidates, this mostly applies to Snyder. I reached out to friend of the blog and legendary reporter Tom Moore who told me the following when asked about the Sixers search:

@brandonleesbn Tough to get info about search. Heard some names from previous regime, but not sure if they're still in mix.

So that turned out to be a lengthy recap. What to make out of all of this? Well, I'm disappointed Malone is off the board now. I do think Shaw and Finch remain the most intriguing, and potentially best, rumored candidates. Snyder is a somewhat of a mystery but I think I'd be OK with him. I might be OK with Sampson too, but I'm not favoring him. I like Curry as a defensive assistant, the role he played under Collins, but not so much as a head coach.

More: It Doesn't Matter Who Coaches the Sixers, But It Does

I do actually like that no "big names" have been attached to the search. I'm talking about the veteran coaches who want to go to teams that can contend right away (ex: Van Gundy, Sloan, etc). The Sixers can't kid themselves into thinking they fit that mold. They need to find a coach who can help them build towards a championship contending team, not just instant gratification wins.

Take it for what it's worth, but my gut feeling is that Brian Shaw or one of the Houston assistants is the leader for the job.

While we're at it, let's look around the league at what some of the other teams with coaching vacancies have done.

I already mentioned the Suns (Hornacek) and Kings (Malone).

Rich talked about how the Sixers should hire him, or what he represents. I'm a little disappointed the Sixers missed out on him. I'm not sure the Sixers were ever officially interested in him.

Never seemed like a Sixers target, but the folks at Rufus On Fire seem to like him.

The former Hawks coach is now the main guy in Milwaukee. Not the worst hire but seems kind of "meh" to me. Not upset the Sixers "missed out" on him.

Along with Philadelphia, the Brooklyn Nets, the Detroit Pistons, and the Los Angeles Clippers are all looking for new coaches.

So now I'm curious to see what everyone else thinks since there hasn't been much discussion about it.