In this week's edition of the Sunday Morning Shootaround, Nick Young hosts a basketball camp, Damien Wilkins shows off his cologne collection, and we look back at Evan Turner's time as an intern.

Nick Young is hosting a basketball skills camp this summer. Seriously. From the official Web site:

"This CAMP is designed to provide all players an opportunity to demonstrate their talents/skills and learn new concepts while working individually and in team settings."

Nothing says "teamwork" like a basketball camp hosted by a man who has a career average of one assist per game. But to be fair, from what I've been able to find from different places, Swaggy P is a very gracious host who frequently interacts with the campers. The kids attending probably won't gain many useful skills (unless learning how to shoot contested 21-foot jumpers while falling out of bounds is considered a "skill"), but they should have a good time.

If nothing else, they'll enjoy the Swaggy P experience more than they'd like these other three camps: 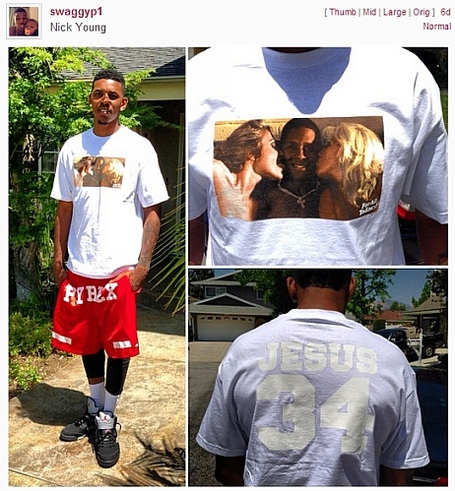 Nick Young is routinely praised for the more flashy, ostentatious articles of clothing in his wardrobe, but this shirt may be the best thing in his closet.

The main image on the shirt is a screencap of Spike Lee's "He Got Game" - specifically, the scene in which Ray Allen Jesus Shuttlesworth takes his official visit to Tech U (where Rick Fox - who looks NOTHING like a college athlete - serves as his chaperone) and is... warmly greeted by two Tech U co-eds who bear a startling resemblance to Chasey Lain and Jill Kelly.

Aside from the ambiguous ending, "He Got Game" was actually a pretty decent movie (except for the whole Denzel/hooker sidebar) and enough of a cult classic that Allen is STILL referred to as "Jesus Shuttlesworth" 15 years later. So whenever Swaggy P holds the "clothes and shoes give away" he mentioned last week, I hope this shirt is included. By the way, Kobe Bryant's mother has already agreed to sell whatever clothes Nick Young is unable to unload.

(FYI: Allen Iverson was actually up for the role of Jesus Shuttlesworth. That would have been the worst casting decision in a sports movie since Brian Dennehy's "portrayal" of Bobby Knight in "A Season on the Brink.")

We mentioned the video here on LB back in November, and it serves as a nice pick-me-up for those of you who wrote Turner off at some point this past season (read: all of us). He comes across as a very likable guy in the clip as he dominates the office pick-up game, and even pitches an idea for a story about his jumper. Unfortunately, the video was made before Turner shot a career-worst 41.9 percent from the floor this season. If Men's Health were to publish a piece on Turner's jumper now, they could fit the whole thing on their Twitter feed.

"Evan Turner's jump shot? It sucks. He needs to get his money back from Herb Magee. Full stop." 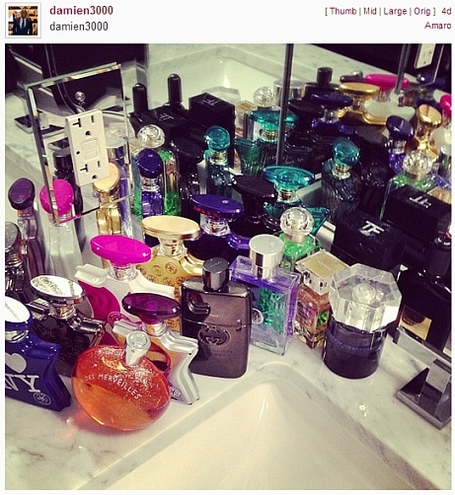 Damien Wilkins doesn't just lead the Sixers in veteraness - he's the team captain when it comes to the smell goods as well.

His sink ledge holds no fewer than 14 bottles of cologne, including Gucci and multiple versions of Bond No. 9. For as old as Wilkins is, I would have expected to see a bottle of Brut and/or Old Spice in the mix. By comparison, Justin Holiday owns just two brands of cologne: a travel-sized bottle of Ed Hardy and an unopened Curve gift set.

We still have some work to do as part of our move to a truly post-racial society: Nick Young used an unnecessary, color-specific adjective (white) in front of a noun (brotha) while sending some birthday love to his white brotha Spencer Hawes. Perhaps Swaggy P didn't want to come across as being too familiar with his teammate, and I, for one, don't blame him.

Typically, this would be an appropriate place to wish Hawes a belated Happy Birthday on behalf of the crew here at Liberty Ballers. Instead, I'll use this space to report that a committee of NBA owners unanimously voted against the relocation of the Sacramento Kings to Hawes' hometown of Seattle, Washington.