We'll bring the links, you bring the discussion. Casual Friday open thread discussion fun for everyone!

Welcome to another edition of the Liberty Links Lounge.

Before I get to the links I wanted to share a mini-rant that our great and fearless leader Michael Levin posted on Twitter last week.

Blogging still gets a bad rep because of the supposed lack of journalistic integrity and I don't care because this is a hobby for me.

And LB gets largely ignored or pretend-ignored by the mainstream guys who just write AP style columns again and again. That's fine.

And @JmitchInquirer can call me a west coast fanboy because that's fun and I enjoy that as an insult.

But when @derekbodner and I actually scoop a story 6 months ahead of time and get no credit for it?

LB links to the mainstream guys all the time. All the time. Then the D-League story breaks and we don't get any credit for it.

Not crediting the scoop? WHO'S GOT JOURNALISTIC INTEGRITY NOW, NEWSPAPER BOYS?!

And I'd put my writers at LB up against any of the mainstream Sixers guys any day of the week. And they write for [f***ing] free.

Oh and here's the proof that LB (mainly Mike + Derek) broke that story.

Toot It Or Boot It Series!
The inspiration behind the series name: here.

Also in which Roy declares Smashburger the "No. 1 overall seed in the unofficial Liberty Ballers fast-food burger rankings".

The 76ers Are Officially In The D-League Business: Say Hello To The Delaware 87ers
Yay D-League! But, uh... that name.

You've Got Sixers Email Vol. 2: The Draft, Catfishing and Big White Guys
Where we talk about how enormous I am.

Sixers D-League Delaware 87ers Verdict: So Sevens.
So Sixers. So Sevens? They Sevens’d this.

EXIT INTERVIEW: Acquisition of a post player can only help Sixers’ development of Thad Young - Sixers Dish
Hmm... "Young was told by the Sixers’ coaching staff during his exit interview that it would be in his best interest to work on his outside game."

Video: Evan Turner Yells at Geese (But the Mother Goose Don't Back Down) - The 700 Level
The most Evan Turner moment you'll see this week.

Ten Biggest Questions for the Sixers’ Off-Season: #9. Is Thaddeus Young Untouchable? - The 700 Level
I love Thad, but no. I wonder what kind of haul he could bring?

A plan worth considering for Sixers - phillyBurbs.com
Not in love with this one. Tyreke Evans, OJ Mayo, Al Jefferson. Thanks but no thanks. 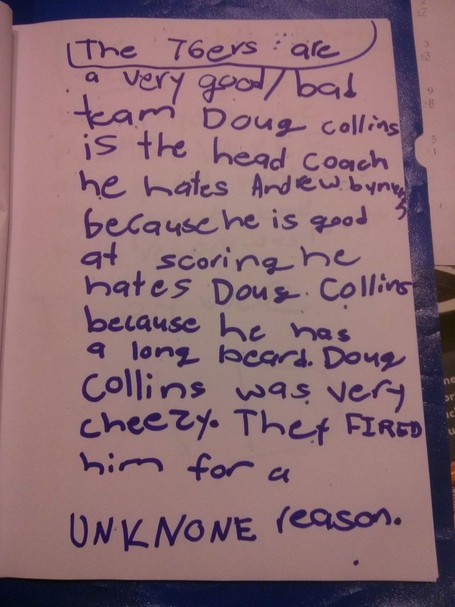 REMINDER - RULES OF THE THREAD: As long as you keep it clean (no cursing and please remember to bathe before threading) and respectful, it's fair game. It's your thread - use it as you see fit.